In Northern Kenya, climate change isn’t the direct cause of conflict between pastoralist communities—but its compounding existing challenges.

In my graduate development and humanitarian action classes at George Washington University, climate change is an inevitable (and important) subject we study because of its global implications. So far in my academic career, I’ve understood climate change from the “ivory tower” of classrooms. Now that I’m in Kenya[1], I’m seeing with my own eyes that the reality of climate change is already here.

Climate Change as a Threat Multiplier in Kenya

Within CPI Kenya’s work, climate change is a clear threat multiplier in Northern Kenyan ecosystems. When I say threat-multiplier, I mean that climate change might not be the direct cause of a risk but that it exacerbates a situation. This is important because countries like Kenya are projected to experience climate change’s consequences more intensely, but are not in an economic position compared to higher-income countries to mitigate and adapt to them. 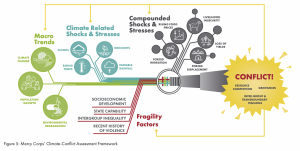 For example in Northern Kenya, resources like water are becoming more scare because of changing weather patterns that didn’t exist 10+ years ago. Temperatures are increasing, droughts and heat waves are prolonged, rainfall is more variable and intense, and sea levels are rising. All of these changes set off chain reactions in an ecosystem. If tensions (be they social, cultural, or political) are already present, climate change can compound the situation.

When it comes to the pastoralist lifestyle, herding cows isn’t just a job for pastoralists. They hold a lot meaning, culturally and economically, for pastoralist communities. In Baringo County and across Northern Kenya, where cattle is king, climate impacts have contributed to increased conflict between tribes because there isn’t enough water and food in one area for their livestock to survive. To supplement their herds and/or find greener pastures, pastoralists cross boundaries to steal and recover herd animals from each other. Violent cattle raids in across Northern Kenya have become deadly, and make life more difficult for communities.

The complex nature of conflict in Northern Kenya is why CPI Kenya is empowering children to be the change in their ecosystems. By bringing children from tribes in the midst of conflict together to have fun and become friends, they show parents, pastors, warriors and chiefs in their communities that peace is possible. CPI Kenya is helping communities attain sustainable peace in hopes that the they can also work together to adapt to and mitigate some of the issues climate change exacerbates.

During the CPI Kenya’s peace camp in Baringo County from March 26-30 at Kiserian Primary School, we saw climate change’s consequences firsthand. When I spoke to Kiserian Primary School Headteacher Allen Kikyeni about changes in weather over the last 10 years, he said that unpredictable rainfall and late rainy seasons are affecting when people plant crops and increasing food insecurity.

Then in 2020, Lake Baringo flooded for the first time destroying homes and displacing residents. One student, Ruth, told me the flood destroyed her school and at least 3 others—forcing her and other students to relocate to other schools in the area. This was a big deal for families because they had to figure out a new way for students to get to school. It meant children walking longer distances, taking costly transportation, or missing school all together depending on the situation. 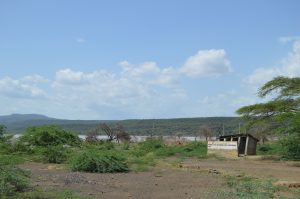 In 2020, the Baringo Flood reached all the way up to this small building, about ~100 meters (300 feet) from Kiserian Primary School. 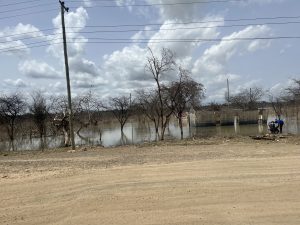 Flooded town along Lake Baringo where residents have been forced to relocate. 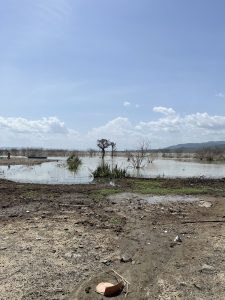 New shoreline of Lake Baringo. Before the flood in 2020, the shoreline was 1km from where it is now. 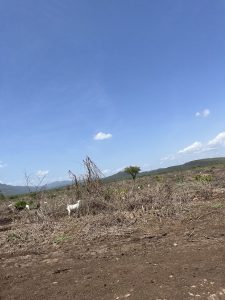 The village of Chepkalacha, however, has different climate risks and impacts. The village has an even more arid environment compared to Kiserian even though the towns are just 40 miles from each other across Lake Baringo. Chepkalacha has always experienced drought, but in the last decade, prolonged and increased periods of drought and rainfall variability have made matters worse.

Chepkalacha Chief Jeremiah Saban told me that his main concern about the weather revolves around people having enough water. He said that schools are even closing and people are migrating to areas where water resources are more reliable. 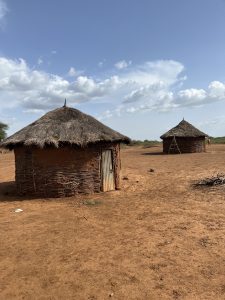 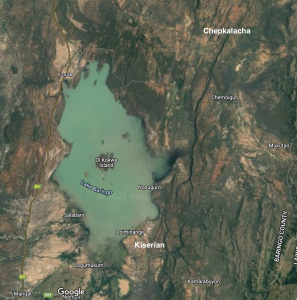 The implications of climate change will only continue to worsen as high-income countries continue to miss their marks on climate financing for adaptation and mitigation promises. In the meantime, CPI Kenya continues to work across Northern Kenya to create opportunities for communities to engage in peace processes and build a more peaceful Kenya.

[1] Kenya’s climate is naturally dry and arid with a more temperate climate in the highlands. It has 2 rainy seasons, “long rains” from March to June and “short rains” from October to December. There’s little seasonal variability and dry spells/ bouts of drought are not uncommon, especially in Northern Kenya.