Before Friday, Kenya was Nairobi. More specifically, it was Ongata Rongai, the neighborhood where the Children’s Peace Initiative Kenya’s (CPI Kenya) office is, and where I’m staying in Nairobi. On Friday, that all changed when Monica, CPI Kenya co-founder, took the mzungu[1] on a two hour road trip to her hometown, Kagumo, in the White Highlands of Central Kenya.

The highway turned to one way roads, which turned into narrow, red clay roads. Lush, vibrant vegetation grew in every direction—homesteads surrounded by tea and coffee farms. We picked up some friends along the way, including Monica’s 14 year-old son Elias and her 20 year-old daughter Chebet. Monica adopted Elias after a peace camp when Elias was 4 years old, and has been part of the close-knit family ever since. Chebet lives around Monica’s family’s homestead and is now in her second year of university—Monica began taking care of her after some family troubles. 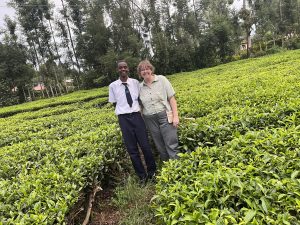 Elias and I on a tea farm. 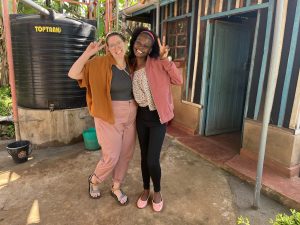 Chebet and I happy to see each other for the drive back to Nairobi.

The weekend was filled with so much kindness, warmth, and welcoming that I could hardly remember the loneliness I felt in Nairobi during the night. (This blog is a space for honesty, so I won’t lie to you that a new place with no familiar places can be jarring—and lonely!)

Our first stop was Ben’s house, Monica’s cousin. After we picked up his son, Fabi, from school, we helped Ben with some paperwork. His family welcomed me into their home with hot tea and afternoon snack—which was the beginning of the overwhelming sense of thankfulness and gratitude for Kenyan hospitality I felt the entire weekend.[2] Their family even gifted us a chicken to eat over the weekend (see below from my apprehensive photo with the old lady hen we made into a lovely meal later in the weekend)! 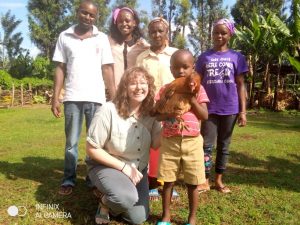 Monica’s aunt’s family and Julia with the gifted chicken. 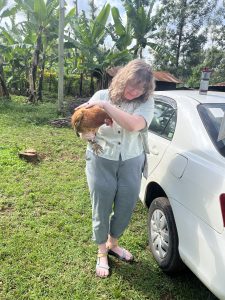 Julia with the dinner chicken.

From Ben’s house, we picked Elias up from school. We met the Deputy Principal who insisted that Monica and the mzungu address the daily assembly. At first, I thought it was a joke… but before I knew it, teachers were herding children to the courtyard and kids were rushing downstairs. Monica and I jumped center stage with the Deputy Principal where he introduced us and the children got to ask the mzungu lots of questions. 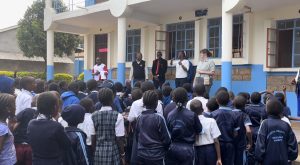 After the impromptu performance at Elias’ school, we headed into the small main part of town where we had to pick up a few things. Each stop we made, people in shops and on the street introduced themselves to me, excited to meet the mzungu in town. This happened everywhere we went—if people could see the white, freckled, blue-eyed mzungu in the car they wanted to stop and chat (of course, I was always happy to meet new people!) By the end of the weekend, I met so many people that my head was spinning in the best way. 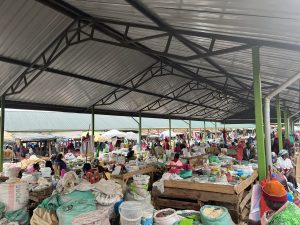 Monica’s family’s home is surrounded by tea farms. Tea is a big cash crop in the region, and most people spend their days rotating from farm to farm, picking tea and coffee. Once the tea is picked, it’s brought to a buying center where farmers and farmworkers are paid for their labor. From there, it’s brought to a factory where the tea is processed and then the good product is exported outside of the country with the lower-quality product staying in Kenya. 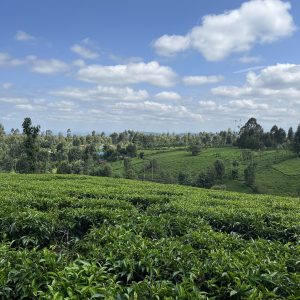 Rolling hills of tea farms outside the driveway of Monica’s family’s home. 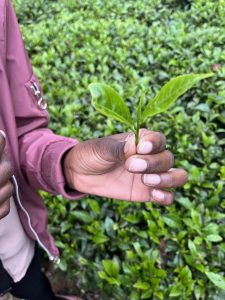 Chebet explaining that the tea is harvested like this, with the 2 leaves and a bud. From there’s it’s taken to a processing center and exported. 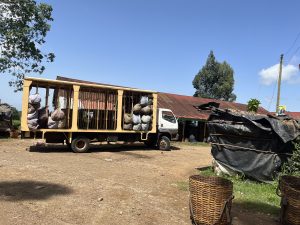 Tea buying center where harvesters and farmers come to sell their tea. From here the tea is processed at a factory and then exported.

The weekend in Monica’s hometown filled my spirit with so much joy for weeks to come. There aren’t words to express the hospitality I felt from everyone I met. The cool mountain weather and the never-ending welcome in Kagumo made me feel like I had a home in Kenya. 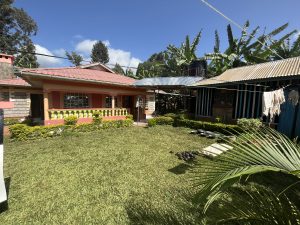 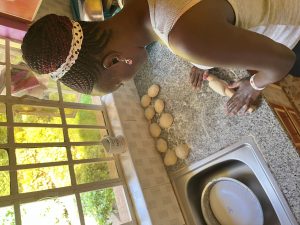 Monica teaching me how to make chapati, a tasty Kenyan flat bread.

[1] Mzungu is Swahili for “wanderer,” and is a nickname given to white/foreign visitors to Kenya.

[2] The Southern U.S. likes to pride itself on hospitality, but I have never experienced such a welcome anywhere in my life.