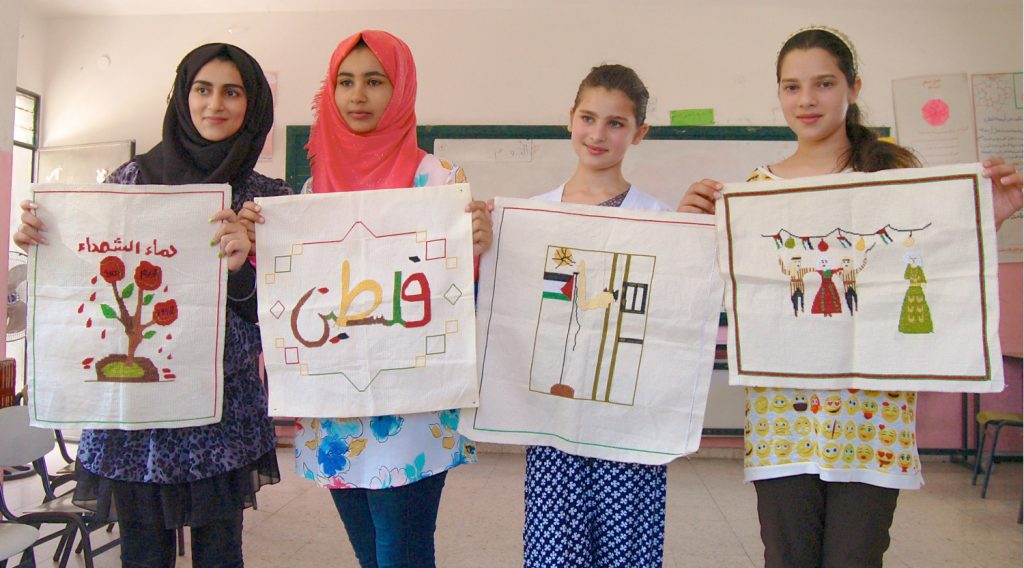 This quilt was produced in 2015 by women and girls from the area of Nablus in Palestine, and a well-known American quilter from South Carolina. The initiative was launched by The Palestinian House of Friendship (PHF), an AP partner that offers support and training to young people in Nablus.

PHF was founded by Mohammed Sawalha, a  dynamic and much-respected professor at the An-Najah University. PHF’s goal is to build a sense of civic responsibility among young people in Nablus and relieve some of the stress caused by the Israeli occupation. AP deployed one Peace Fellow, Katie Conlon, to PHF in 2015. Between 2016 and 2019 we acted as fiscal sponsor for PHF and managed the transfer of donations from PHF’s donors in the United States to Palestine. 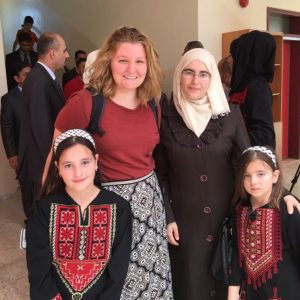 Maeda, seen with Katie Conlon (2015 Peace Fellow) and her two children. Maeda led the artists from the village of Asira al-Shamaliya who produced blocks for the Samoud quilt.

In 2015 Katie described advocacy quilting to PHF’s wide network of contacts and invited women to tell their story through embroidery. Twenty women and girls from the villages of Beit Forik and Asira al-Shamaliya near Nablus volunteered to make blocks using traditional embroidery techniques. PHF had worked with some of the women in the past to showcase and sell their products as a way of preserving Palestinian culture and providing economic support for the women.

Most of the images were inspired by the poetry of Mahmoud Darwish, who used themes that are deeply embedded in the Palestinian society – loss, exile, detention and the all-important olive tree. 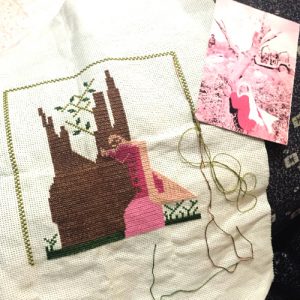 One block draws from a famous photo of a woman trying to save her olive tree from an Israeli bulldozer.

Unfortunately the olive tree has also been at the heart of the dispute between Palestinians and Israeli settlers. Thousands of olive trees have been bulldozed to make way for Israeli settlements. PHF has created a troupe of Girl Scouts and one of their tasks is to help farmers harvest the all-important olives.

Another theme in the quilt is political detention. Tens of thousands of Palestinians have experienced imprisonment at some point in their lives. The quilt also describes the persistent sense of exile since the so-called Nakba (catastrophe) of 1948, the right of return for the Palestinian people and their connection to their homes. 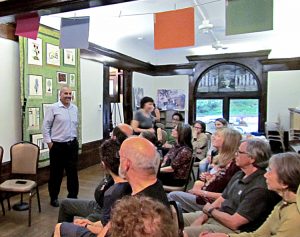 The Samoud Quilt served to illustrate PHF’s work when Mohammed Sawalha met with PHF donors at a fundraiser in Massachusetts in 2016.

The embroidery project was coordinated by two PHF local leaders, Maeda (seen with her daughters and Katie Conlon in the photo) is President of a women’s cooperative in Asira al-Shamaliya and led the training in her village. Amina is a skilled embroiderer and coordinated training in the village of Beit Forik. Amina has sent her son to college on her embroidery earnings.

Katie brought the squares back to the US where they were assembled into a final quilt by Bobbi Fitzsimmons, an AP Board member who has completed several advocacy quilts. The finished quilt was then loaned to PHF’s donors in the US and served as a backdrop for Mohammed Sawalha when Mohammed visited the US in 2016 to meet with his donors and friends in the US. The quilt has been shown many times since then, most notably at a major exhibition in Karlsruhe, Germany (December 2018).

For more information about PHF’s work contact Mohammed Sawalha in Palestine (mohsawalha@outlook.com) or Celia Miller in the US (celiasongs@yahoo.com). 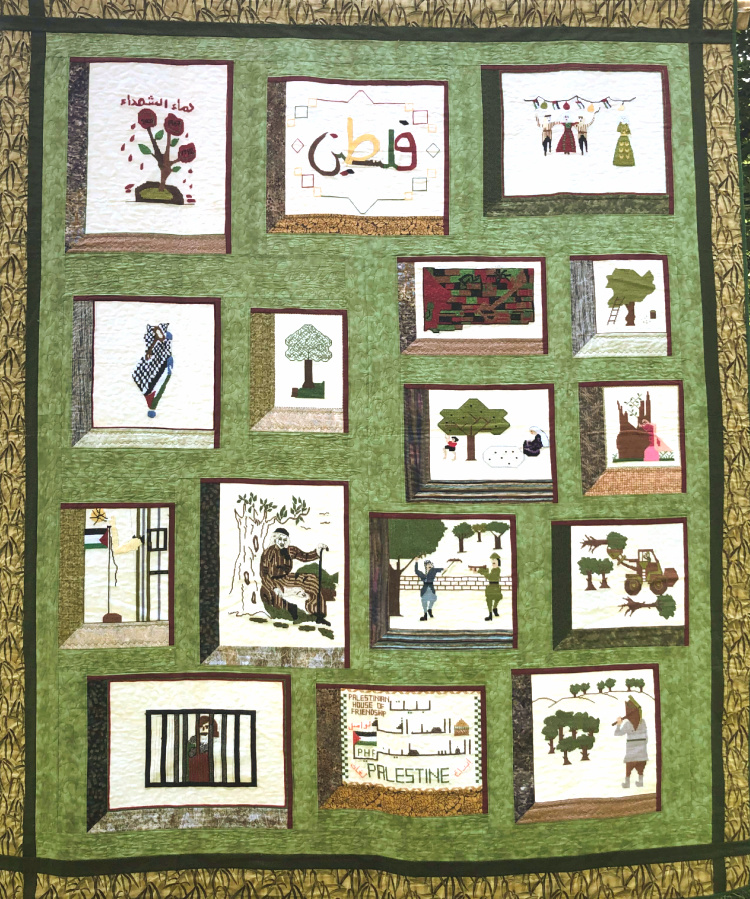