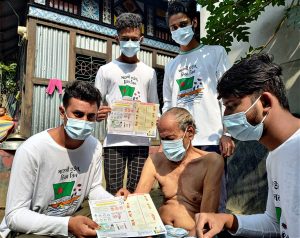 Volunteers in Bangladesh help River Gypsies to get fully vaccinated

Inspired by the same bold message – “Be Brave Get Vaccinated!” – community advocates in Bangladesh, Kenya, Uganda and Zimbabwe have secured 3,045 COVID-19 vaccinations for vulnerable individuals who would otherwise have missed out on life-protecting vaccines.

The four campaigns are run by partners of The Advocacy Project (AP). Beneficiaries include River Gypsies in Bangladesh, people with disability in Northeast Uganda, girls and their families in inner-city Harare, and day laborers in the informal settlements of Nairobi.

The vaccination drives, all carefully targeted, are part of an AP program to empower women and energize partners against the pandemic.

AP also raised $6,145 last October for a fifth campaign in Midwest Nepal by Backward Society Education (BASE), an advocate for the Tharu minority. Infections were surging at the time and BASE used the money to train community workers and deploy a mobile health team in 60 villages. Infections in the region fell sharply and today Nepal boasts one of the highest vaccination levels in the South (67.7%). 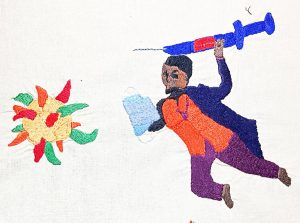 Contacted by AP, campaign leaders said with pride that they were bridging the gap between government services and marginalized communities that often fall through the cracks in health emergencies.

The campaigns also counter COVID complacency. Although the Global South has fared better than Europe and North America, a recent report from the World Health Organization (WHO) concluded that COVID caused 14.9 million deaths globally in 2020 and 2021 – three times the government estimates. Few southern countries will meet the WHO’s target and get 70% of their populations fully vaccinated by June.

Meanwhile funding for vaccines is falling short. Meeting virtually last Thursday (May 12), the second global COVID-19 summit pledged $3.1 billion – well below the target of $13 billion. The US Congress has turned down a request by the Biden Administration for $5 billion to provide vaccines to southern countries.

Caren Mbyaki, a community leader in the Kenyan capital of Nairobi, said that her biggest challenge is getting vaccines to those most at risk. Only 16.9% of Kenya’s population has been fully vaccinated and Ms Mbyaki said the health center in her own settlement, Kangemi, cannot store vaccines after dark, when they would be most used.

Testing is only available at a center far from the settlement and Ms Mbyaki often finds herself alone in wearing a mask.

Ms Mbyaki launched the campaign in Kangemi last summer after her family came down with the coronavirus. She drew on an association of women, the Kangemi Advocacy Self-Help Group. which formed in 2020 to tell stories of the pandemic through embroidery.

When vaccines failed to reach Kangemi, Ms Mbyaki’s team persuaded workers from a government health center to organize health camps in the settlement and went door to door to get out volunteers. Medical workers were given a colorful tee-shirt featuring a needle in pursuit of the virus, designed by Abigael Kwamboka, a team member. (Top photo)

The group recorded 1,957 vaccinations in Kangemi before Ms Mbyaki moved on to work with vulnerable girls in Dandora, site of the largest landfill in Kenya. She set about mobilizing her new team and by last week they had secured 177 vaccinations. 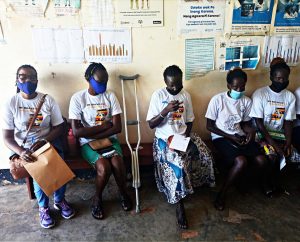 Emma and her GDPU team at the Anaya health center, Gulu district

Another successful campaign in Gulu, northern Uganda, is led by Emma Ajok, a manager at the Gulu Disabled Persons Union (GDPU) who almost died from COVID and described her panic in a blog.

Realizing that government health workers would not go out to remote villages with high levels of disability, Ms Ajok drew up a list of 200 GDPU members who were visually impaired or suffered from limited mobility. She then ferried them in the GDPU’s ageing vehicle to the Anaya health center. GDPU secured a first vaccination for the 200 beneficiaries and a second jab for 130 before the vaccines ran out.

The campaign in Bangladesh is led by volunteers from Subornogram, a group that works with River Gypsies on the island of Mayadip. Bangladesh has one of the best vaccination records in Asia (70.9%) but has also suffered 140,765 deaths according to WHO. This is far higher than the government estimate (29,127).

One explanation for the discrepancy may be the lack of data coming from inaccessible communities like Mayadip. Shahed Kayes, who leads Subornogram, said that the island has no health center and no way to identify COVID victims. The nearest test center is a day’s journey by ferry to the mainland, which is expensive for families that earn $1.50 a day.

Mr Kayes estimated that much of the island population has not be vaccinated. “There have certainly been deaths (from COVID),” he said.

When he became aware of the threat, Mr Kayes mobilized 12 students who have since accompanied 200 vulnerable islanders to a government hospital on the mainland for their first and second jabs.

The fourth vaccination drive, in Zimbabwe, is led by girls who started a soap-making project in 2018 with support from Women Advocacy Project (WAP) and have since branched out into community engagement. The girls distributed soap and masks to poor families under lock-down in 2020 and are now promoting vaccinations. By last week, they had accompanied 181 family members and friends to a clinic.

The campaigns have much in common. Three were launched by leaders who themselves had a close shave with COVID. Four designed tee-shirts which have proved popular with medical teams and injected some fun into the process. (Photos below) 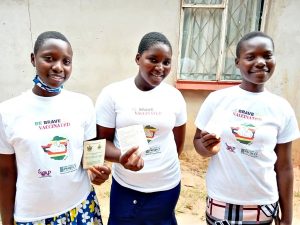 Mitchell, Makanaka and Tadenda are promoting vaccinations in Epworth, Harare

All five campaigns have worked closely with community leaders and local authorities. On Mayadip Island in Bangladesh the influential Imam encouraged vaccinations from his mosque. In Nepal, BASE provided PPE suits and oximeters to several isolated heath centers, earning their gratitude and strengthening them against future emergencies.

Excluding Nepal, where BASE reached thousands of villagers, the four other campaigns have spent $4,899, most of it on transport, which works out at about $1.6 for each vaccination.

This does not reflect the wider benefits from engaging citizens and all five campaigns are now taking on other social problems. In Nairobi, Ms Mybyaki’s group wants to promote vaccinations against the Human Papillomavirus (HPV). On Mayadip Island, Subornogram is mobilizing the River Gypsies to grow food. BASE, in Nepal, will demand better working conditions for Tharu dishwashers.

In Zimbabwe, the WAP girls are making plans to reduce the use of plastic in their communities. In Uganda, GDPU will install accessible toilets and improve hygiene at the St Martin Lukome primary school, which recently opened after two years of lock-down.

All five partner organizations will receive help from an AP Peace Fellow this summer. Follow their blogs.