Clean Girl Soap Unites Girls in the US and Zimbabwe

Soap sales in Arlington raise $682 for girls’ education in Harare 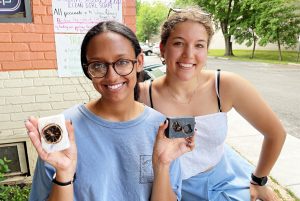 There was jubilation on the leafy streets of Arlington, Virginia, last Friday as four American High School students wrapped up several hours of selling home-made soap on one of the hottest days of summer. They had raised $682 to help girls in the African nation of Zimbabwe attend secondary school.

Tired but exhilarated, the soap-sellers reflected on their achievement over lemonade outside Trade Roots, a store for artisans in Arlington known for its commitment to social justice. 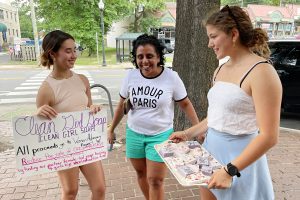 The soap-sellers are members of the Girl Up Club at the Wakefield school and their fundraising heroics capped a remarkable 3-year friendship with the girls in Harare.

The partnership began in 2019 when Women Advocacy Project (WAP) launched soap training for girls in two under-served neighborhoods of Harare with funds from The Advocacy Project (AP) in Washington. WAP’s goal was to help the girls earn some money and so resist early marriage, which is often driven by poverty.

The result exceeded all expectations. Led by two girl “ambassadors,” Evelyn Sachiti and Trish Makanhiwa, the girls developed an all-purpose liquid soap with the brand name Clean Girl and sold around 3,000 bottles by year’s end.

AP connected Evelyn and Trish with Claire Brophy, head of the Girl Up club at the Wakefield school, and the friendship was flourishing by March 2020 when the pandemic struck. Locked down and frightened, the girls in Zimbabwe and the US decided to describe COVID-19 through embroidery. Their powerful stories have been assembled into two advocacy quilts and widely exhibited.

The two groups kept their spirits up by meeting regularly on Zoom to discuss their embroidery designs, music, school and food. One meeting even featured video footage from a recent winter storm in Washington. It was the first time the Zimbabwe girls had seen snow. 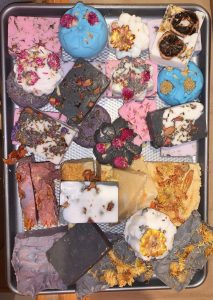 As the pandemic waned, the Wakefield team decided to show their solidarity with the WAP girls by making their own soap. They chose the same name, Clean Girl, but came up with a very different product. While the Zimbabwe soap is green and gooey, the Arlington soap comes in colorful blocks embedded with rose petals, blood orange and other exotic ingredients (photo).

The addition of plants, explained Elena, makes the soap more “exfoliating.” Nahier noted that it was also “super foamy.” The girls provided a hand-washing station outside the store so that customers could judge for themselves.

Midway through Friday afternoon, Elena and Nahier were joined by fellow-students Ana and Mercedes who will take over the Girl Up Club at Wakefield in the Fall and hope to continue making Clean Girl soap. “We’re the new Elena and Nahier,” said Mercedes. “We’ve been trained by the best!”

By the end of the day few shoppers had escaped unscathed and the choice spots – including an ice-cream store – were well covered. It was all part of the experience. “This is teaching us to market, be friendly, and approach people with confidence,” said Elena. 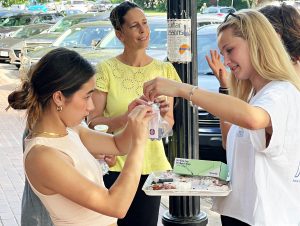 Mercedes and Ana Ilinca Ignat wrap soap for a customer

Customers were impressed by the pitch as much as the soap. “I’m excited because (the soap) will make me clean and make me remember these girls who are helping to make this world a better place,” said Nadia McGeough, a Process Excellence Leader at the housing enterprise Freddie Mac.

Looking back on a job well done, Elena described her day as “a perfect start to the summer.” She then left for the beach, to be followed by a visit to Argentina and enrollment at Minerva College. Nahier heads to Williams College and plans to continue volunteering for good causes. “No other way!” she said.

In Zimbabwe meanwhile, the WAP girls are hoping to sell 16,000 bottles of their Clean Girl soap this year – the same amount they sold in 2021. Their success has attracted support from several donors, including Action for World Solidarity (Germany); Together Women Rise (US); and Rockflower (US).

For all their achievements, some of the girls in Zimbabwe have been forced to drop out of school by the financial crisis. As a result, AP and WAP have decided to launch a modest education fund for the soap-makers. Dawa Sherpa, a 2022 AP Peace Fellow, is helping WAP to compile a database of girls who need to complete school, with help from Peace Fellow Aimee Benitez in California.

The first contribution to the new fund will come from the money raised in Arlington last week.

Clean Girl soap is still available. Email us to place an order or donate
Watch this video of the Zimbabwe soap-makers at work and play
Follow the Zimbabwe soap project through our reports on GlobalGiving.