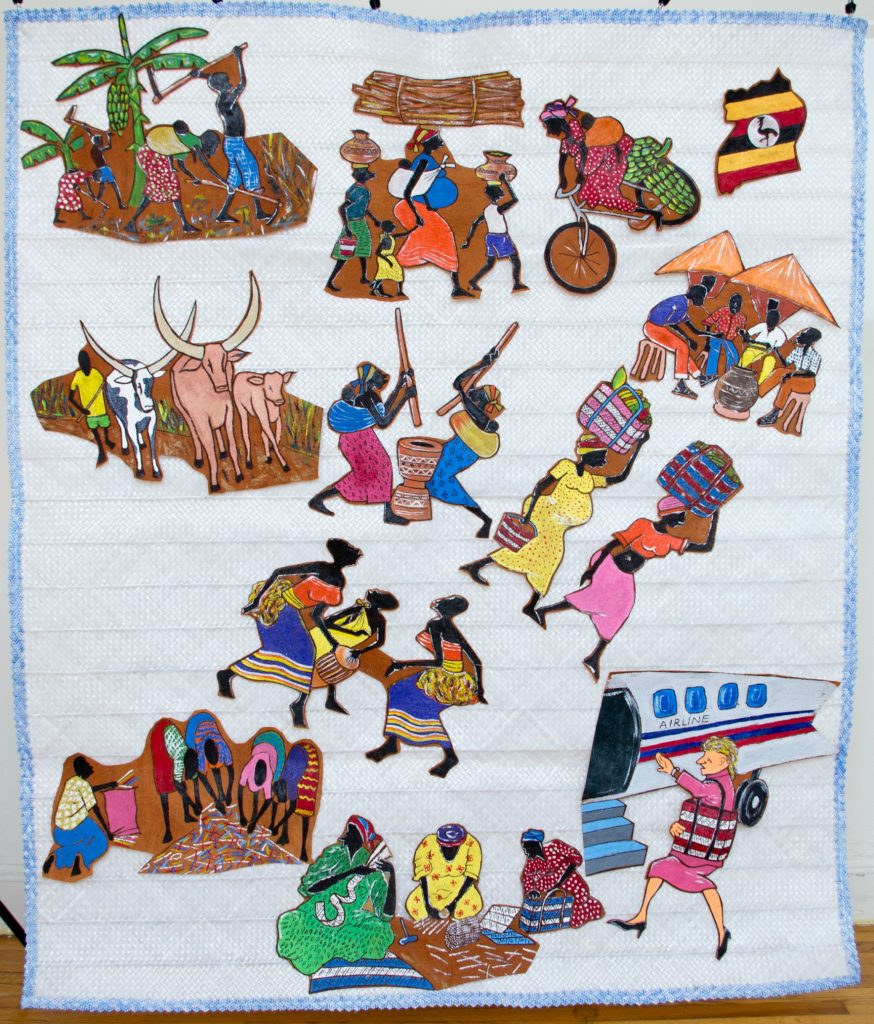 This quilt is one of the most unusual and innovative to have been produced by an AP partner. It was made by a team from the Kinawataka Women Initiatives (KWOI), an association that works in the Kinawataka settlement of Kampala to empower marginalized women and orphans and ease some of the pressure on the environment. 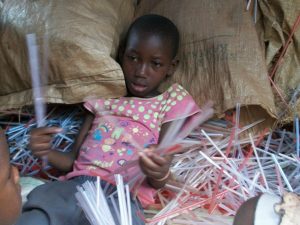 Straw world: At the KIWOI center in Kampala.

KIWOI was created in 1998 by Benedicta Nanyonga, a retired official from the Bank of Uganda who was tired of living amidst piles of uncollected garbage and discarded plastic. Benedicta, a natural entrepreneur, was also concerned at the poverty and under-nutrition of women in her neighborhood. She hit on the idea of collecting and recycling drinking straws, and turning them into bags. She enlisted an enthusiastic group of local women, received a small donation from a local company and launched one of the world’s most unusual environmental campaigns.

Scarlett Chidgey was the first AP Peace Fellow to volunteer at KIWOI in 2011. By this time, KIWOI was well known and admired in Uganda and abroad. The women of KIWOI had collected hundreds of thousands of straws and developed a technique for weaving them into bags. KIWOI had also branched out into other products, including wallets and folders for use at conferences. The full range of products can be seen on the KIWOI website.

At this stage, the concept of advocacy quilting was relatively new, but Benedicta’s team jumped at the idea of producing a quilt from straws to illustrate their work, and the threat from plastic. Scarlett – an excellent photographer –  recorded the process and also participated with enthusiasm. The final block shows Scarlett herself boarding the plane that will take her back to the US, with the quilt.

The KIWOI team called their quilt Butonde – Nature. Each stage is described and depicted in the next tab. 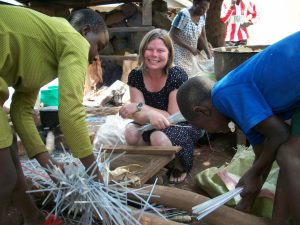 It began with collecting the straws. Benedicta founded KIWOI because she was shocked by the number of discarded straws in the settlement. Straws were blocking the drains and adding to the stinking piles of garbage. Occasionally cows would wander in and ingest straws at serious risk to their health.

The KIWOI ladies used around 10,000 individual straws for the Nature quilt. Some were gathered up by hand. The rest were picked up from bottling companies including Coca Cola. The straws were then brought to the large warehouse that serves as KIWOI’s workshop where they were thoroughly washed, disinfected and dried.

The third stage was the most difficult. Before they can be woven, each straw has to be flattened. This is best done by a knife which is of course enormously time-consuming and potentially dangerous in a country where cuts can cause serious infections.

This is the part of the process that would benefit most from a machine, and KIWOI has tried for years to come up with an automated solution. Several entrepreneurs have spotted an opportunity and one Asian company produced an ungainly prototype which was shipped (at KIWOI’s expense) to Uganda but failed to work. AP purchased a laundry press machine in the US and took this to Uganda, but it too failed to work. As a result, the tiresome task of flattening straws continues to be done by hand. Each women is paid by the number she can flatten. 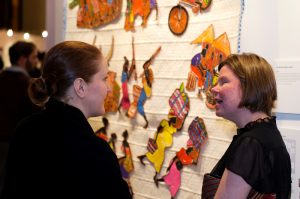 The ten thousand straws for the Nature quilt were readied within a month. The KIWOI team then settled down to weave them into a quilt with an edge.

The next stage was to produce designs describing the threat to the environment. These were painted by the KIWOI team onto bark from the local mutuba tree which was beaten and pressed into a form of paper.

The team produced twelve different designs that gave a wonderful quirky and colorful account of the relationship between Ugandan women and nature. We see a cow eating straws, crops being grown, and straws being recycled by the KIWOI artists. Some paintings also make it clear that a woman’s life is not easy – as when we see women grinding maize, carrying wood, and going to market. One picture shows men sitting around drinking beer and getting drunk when they should be working.

The paintings were not added to the quilt in Uganda. Instead, they are kept separate and added each time AP exhibits the quilt.

The quilt was first unveiled in 2012 at a major exhibition at the UN headquarters in New York. Scarlett traveled from California to present the Nature quilt, which was eventually seen by an estimated 80,000 visitors to the UN. In 2014, Benedicta visited Washington to accept an environmental prize and insisted on unveiling her quilt outside The White House (photo). The Nature quilt has continued to attract attention and comment at exhibitions ever since.

Back in Uganda, the tireless Benedicta has continued to mobilize and empower women on behalf of the environment. AP sent two more Peace Fellows to help, including Shannon Orcutt from the University of George Washington, who stayed for 6 months and produced a strong video about KIWOI’s work. KIWOI has also been praised by the Plastic Pollution Coalition for its relentless assault on plastic. 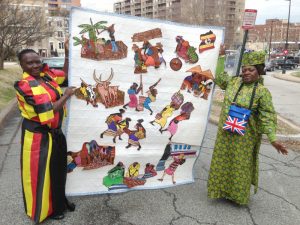 Benedicta Nanyonga, left, displayed the Nature quilt outside the White House in Washington.

Benedicta’s crusade achieved its greatest success in 2018 when Uganda became the latest Africa country after Rwanda and Kenya to ban the use of plastic bags. This even includes airport duty free bags which are taken away from travelers and replaced with a paper or canvas bag.

KIWOI would like to replace plastic bags with its own bags made from recycled straw, which would be the ultimate rebuke to plastic pollution. But this runs up against the challenge of production. Until and unless Benedicta can find a way to press straws in greater quantity, sales will remain limited. In the meantime she remains an inspiration to the women of Kinawataka and is held up an example of innovation and environmental activism by politicians in Uganda and  internationally.

AP remains in touch with Benedicta and was pleased to donate to KIWOI in late 2019. All photos by Scarlett Chidgey. (October 2020). 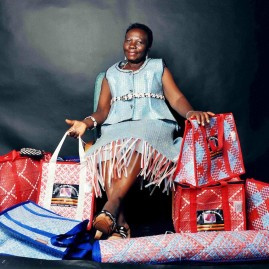 Benedicta Nanyonga founded The Kinawataka Women Initiatives (KIWOI) in 1998 in the hope of raising the standard of living for women in the community. She came up with the novel idea of recycling straws after finding a bunch of straws blocking a local waterway. 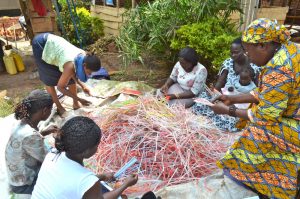 Straws for the Butonde quilt were collected from the streets, picked up from bottling companies and sorted out for quality and color at KIWOI. 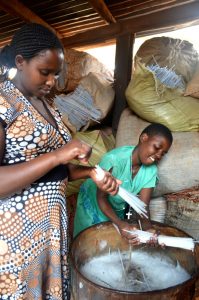 Peruth, left, and Florence wash the straws in preparation for weaving. 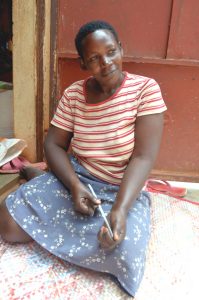 Each straw must be flattened by hand, using a knife, before it can be woven. With 10,000 straws, the nature quilt gave KIWOI’s dedicated team a lot of work! 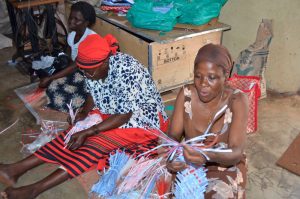 The weaving begins. The KIWOI team produced one section of the nature quilt at a time, Working in a group among friends was enjoyable. 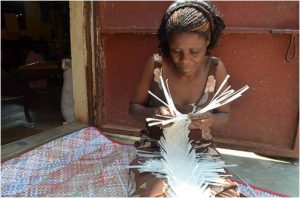 Margaret Nakibule says that “the environment is important because it provides us with food, shelter and water. Making bags from recycled straws helps protect the environment.” Her dream is for KIWOI to widen their market and export their products to women all over the world. 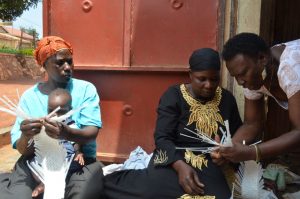 Benedicta helps Hadijah to weave straws for the Nature quilt. 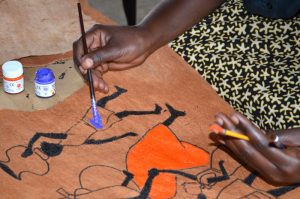 Painting the blocks: each scene is painted onto bark from the mutuba tree which was beaten and pressed into paper, further demonstrating KIWOI’s commitment to the environment. 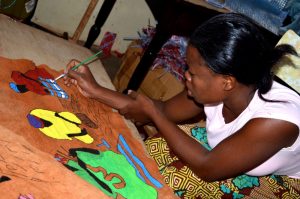 Farindah Nakintu says that “KIWOI has helped many jobless women develop skills and learn to satisfy their needs.” Her favorite panel depicts women weaving. She says it shows how women can be successful if they work hard for themselves and take care of their environment. 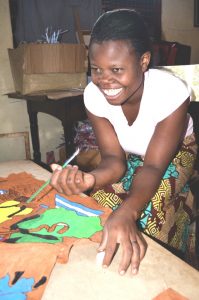 Ziporah Achieng hopes the panels will teach outsiders about traditional Ugandan culture and reveal some of the hardships that Ugandan women face. She thinks this will change once women develop small businesses such as KIWOI. 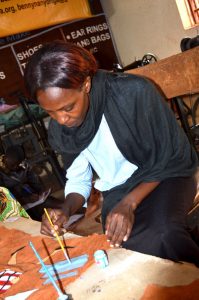 Josephine Lukwago has raised her four children since her husband passed away in 2004. “In Uganda, the woman sustains the house. The woman eats last after everybody has eaten. The woman sleeps last. Women work like machines. Life is very hard for a Ugandan woman.” 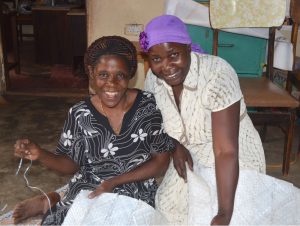 Sewing the pieces together: Margaret and Hadijah attach pieces of the nature quilt and add an outer border, also made from straws. 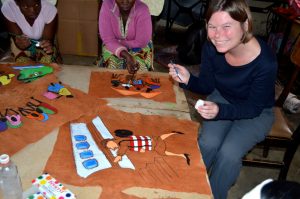 Scarlett helped at every stage of the assembly. Here she works on painting herself as she departs Uganda with the finished nature quilt! 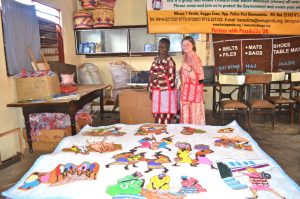 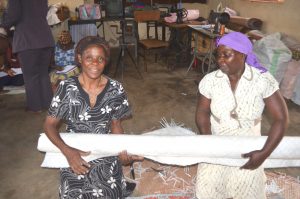 Getting ready to travel: Margaret and Hadija roll the nature quilt up and get it ready to be shipped back to the US with Scarlett.