Kenyan Art Quilts Raise Over $12,000 For Community Action In Nairobi 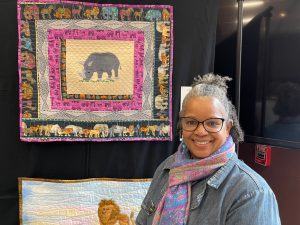 The auction of 39 art quilts from Kenya has raised $12,308 for the artists in Nairobi, opening the way for them to tackle social and environmental challenges in Kibera and Kangemi, two of Nairobi’s toughest settlements.

The auction was one of several initiatives launched last month by The Advocacy Project (AP) under Sister Artists 2, a global program that connects fiber artists in Africa and North America.

The quilts feature African wildlife and were made jointly by artists in Kenya, Canada and the US. The American quilters included Veronica Mays from Rhode Island, seen in the photo with The Finest Rhinoceros which she made with Irene Akinyi from Kibera. 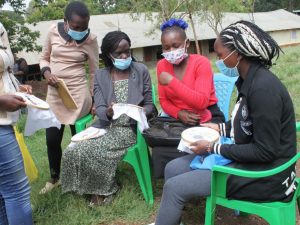 The quilts were auctioned on March 8 (International Women’s Day) and exhibited at the George Washington University Museum and Textile Museum in Washington DC.

The auction attracted 188 bids, with birds leading the way. Cranes, finches, ostriches, flamingos, crested rollers and even peacocks generated well over $3,000, with the highest bid ($525) going to Feathers and Flowers, made by Diana Adeya in Nairobi and Diane Clapes in Georgia. Diana works with survivors of gender-based violence.

The exhibition was the third partnership between the Textile Museum and AP. It attracted around 180 visitors, including five who produced quilts for the show.

In welcoming remarks, Minister Ronald Ekitela, a senior diplomat at the Kenyan Embassy in Washington, expressed the gratitude of the Kenyan government and described Sister Artists 2 as a “noble cause.” (Photo) “It gives us great pleasure to join you in appreciating the fine art of brilliant sisters,” he said. “While showcasing diversity and beauty, these quilts also act as bridges for different cultures.” The exhibition and auction were written up in the Embassy newsletter and covered in the Kenyan media. 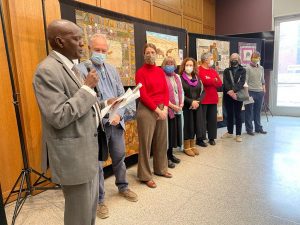 Melanie Greenberg, who heads peace-building at the Humanity United Foundation, a supporter of AP’s quilting work, agreed: “I would argue that what we’re seeing on the walls today is the true meaning of peace.”

Stella Makena (Firefinches), who organized the embroidery training in Kibera, said that COVID-19 had been particularly hard on mothers and that stitching together had helped to ease the stress: “This was a life-changing experience. We put our hearts into it.”

Rhonda O’Keefe (Zebras), a director at the Broad Institute in Cambridge, MA, suffered a stroke soon after receiving her embroidery from Kenya and said that designing her quilt had helped her to recover: “I was thrilled to be a part of this.”

Many Northern quilters researched their subjects carefully. Merry May’s design of Wading Buffalo features deep earthen furrows made by a plough and a stream where the animals cool down. The quilt even shows a leopard peering out from undergrowth, ready to pounce. Deborah Weir, another experienced quilter, used ostrich feathers in making Ostrich. 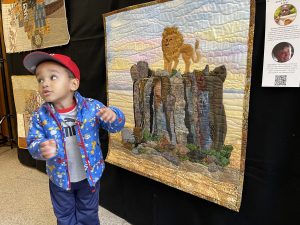 The online event was managed by Bobbi Fitzsimmons and Abby Hack from AP. Ms Fitzsimmons coordinates the AP quilting program and contributed a quilt (Sunrise at the Water Hole) for Sister Artists 2. “Some of your stories give me goose-bumps,” she told participants.

Profits from the auction will now be invested in two associations, Shield of Faith in Kibera and the Kangemi Advocacy and Self-help Group. Both groups were formed by the Kenyan artists to facilitate the embroidery training and both are now moving into advocacy and income-generation with help from AP.

Shield of Faith has started an innovative vermiculture project in Kibera and plans to produce embroidered bucket hats with mothers of children with albinism. Members of the Kangemi group like Rachel, seen in the photo, have helped hundreds of their neighbors to get vaccinated against COVID-19. They hope to make embroidery for sale.

Any income-generation will have the support of the Kenya government, according to Minister Ekitela from the Kenyan Embassy. “We thank The Advocacy Project for giving the two groups an opportunity to exhibit their potential and improve their livelihoods,” he said. “The government appreciates and welcomes these partnerships.”

The Sister Artists 2 events wrapped up on April 8 with a presentation by AP to staff from the UN Population Fund (UNFPA). The agency and AP introduced the Kenyan artists to stitching at the UN Summit on Women and Girls (ICPD25) in November 2019.