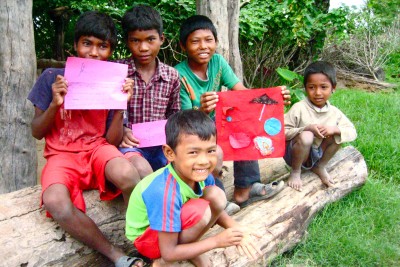 Social Network: Groups of children worked together in painting squares for the first Love Blanket.

Between 2010 and 2012, Nepali girls and boys produced squares for six richly decorated quilts, which they labeled Love Blankets. Many of the young artists had been rescued from child slavery. Four of the blankets were assembled in Nepal and two in the US, where they have been widely exhibited. The project has coordinated by AP’s partner in Nepal, Backward Society Education (BASE), to publicize and expose the scandal of child labor. AP Fellows assisted in the making of all of the blankets, and also produced a seventh quilt in the traditional Tharu art style.

As we report on other pages, bonded labor in Nepal is illegal but still practiced against children from the Tharu minority. The most widely known example is the recruitment of young girls to serve as kamlaharis, or domestic workers.

As part of its campaign to eliminate child labor, BASE is developing a network of “child friendly” villages in the west of the country. The idea is to create an environment where children can shelter from slavery and escape from the ever-present threat of child labor. Within each village, BASE tries to ensure that every child goes to school, and that parents and communities accept responsibility for protecting child rights. BASE has designated 313 villages in the districts of Dang, Banke, Bardiya, Kailali and Kanchanpur as Child Friendly Villages.

The First and Second Love Blankets (2010)

The first two love blankets were produced in Nepal in 2010, under the supervision of Peace Fellows Adrienne Henck and Karie Cross, who worked with 183 children in 9 villages. Adrienne and Karie criss-crossed central Nepal with a BASE staff-member, meeting with Child Clubs and Child Friendly Committees.

As Adrienne and Karie later wrote in their blogs, between ten and fifty club members would attend each blanket-making session, which lasted approximately one and a half hours. Their BASE colleague would explain the purpose of the project and answer questions from the children. The children were encouraged to think about child labor and children’s rights. They would then form small groups, each of which would make a square for the Blanket.

They began by discussing their idea. Each group then made a practice drawing using markers and paper. The next step was to choose a solid-colored cloth square for the backing. The children cut the shapes for the picture from scap salwar kurta, a traditional Nepali cloth worn by women. The cloth that had been donated by a local tailor. 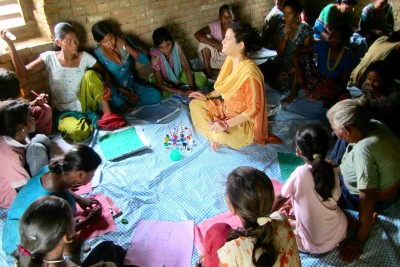 Attentive Audience: Pinky Dangi, from BASE, explains the painting idea to young artists.

Using needle and thread, the children sewed the cloth shapes onto the square backing. After finishing, they wrote the group member names and ages, and the meaning of their picture on a piece of paper. Finally, a photo was taken of each group holding their completed blanket square.

Making the squares took about a month. After all the villages had been visited, the same local tailor who had donated the scrap cloth sewed the squares together. Borders were sewn around each square and a backing for the entire blanket was added. Poorly sewn pieces were also repaired. In all, the children produced 32 squares, which were made into two square blankets.

The children decided to call their products Love Blankets, because children in labor are deprived of love and because the villages seek to give love and affection to their children. Adrienne described it as follows: “The worst part about child labor is that we can’t get any love or affection from our families because we are away from them. Blankets provide a kind of security. We feel warm and comforted when we are surrounded by a blanket.” According to BASE, the nine villages that cooperated in the project were saying:“Through this blanket we made for you, we are vowing to protect you.”

One of the blankets remained in Nepal, to be used in education. The second was brought back to the US, where it has featured in several exhibitions. Adrienne and Karie both used it in presentations at their universities, and AP used it to explain advocacy quilting to quilters in Maryland. (Several of the quilters then volunteered to participate in assembling the Ahadi quilts from the DRC). As Adrienne wrote: “Everyone generally acknowledges that children need good education. But the blanket is a great way to jump start a new conversation about education and children’s rights that may have grown old from repetition. It is a special tool because it is concrete, visual proof that children in Nepal’s poorest villages are demanding good education for everyone. Through the blanket, the children can speak directly to whomever BASE shows their work.”

The Third and Fourth Love Blankets (2011) 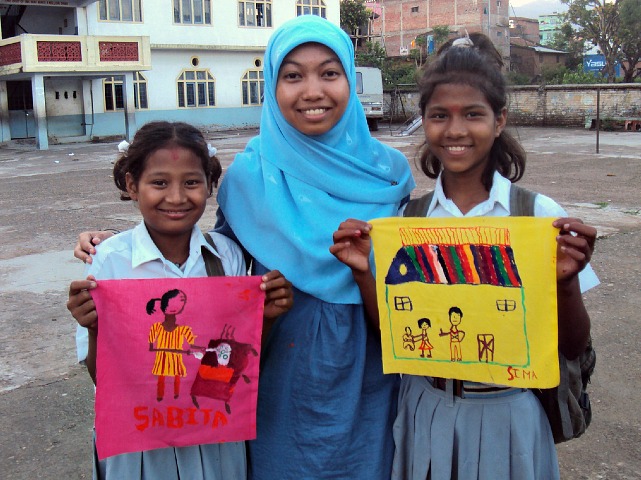 Sima and Sabitha Chaudhury, free domestic workers, are among scores of children who painted squares for the Love Blankets. They are seen here with Maelanny Purwaningrum from Indonesia, who volunteered at BASE in 2011.

The second batch of Love Blankets was produced in 2011 under the supervision of Peace Fellows Maelanny Purwaningrum (Oslo University) and Chantal Uwizera (American University). Maelanny and Chantal were the most multicultural team of Fellows sent abroad by AP. Maelanny, from Indonesia, was studying in Norway whgen she went to Nepal. Chantal’s family had fled the Rwandan genocide, and Chantal herself was studying in the US. Neither had been to Nepal before, and their curiosity about Nepal was more than matched by Nepali villagers. These affectionate encounters were captured on film in an AP video, which attracted 4,000 views within the first week of being posted. Maelanny also drew on her own upbringing in Indonesia as she blogged about going deep into the Nepali countryside to work with young artists.

Maelanny and Chantal produced two blankets and a third quilt, the Tharu Quilt, which was made from bamboo sticks and modeled on the banka, or hand fan. Chantal described the process in a blog: “The children first practice on a piece of paper and then paint those images on a piece of cloth. I suspect that this …is a foreign concept. But the children never shy away from participating and you can see their excitement the moment that the BASE staff translates into Nepali our instructions and the purpose of our visit. The children giggle, laugh at each other’s attempt at drawing a person and copy each other’s concept. The innocence of the children is undeniably the same everywhere and transcends cultural boundaries. I myself used to rely on the school textbooks for inspiration on how to draw a dog or a house.”

The 2011 Love Blankets and Tharu quilt were unveiled in public for the first time in the US by Dilli Chaudhary, the president of BASE, during his visit to Washington in November. Chantal and Karie Cross, both graduates from American University, welcomed Dilli to a panel discussion (photo). Dilli also introduced the quilts at a presentation in Washington at the Church of the Pilgrims, and showed them at meetings at the US Department of State. The two quilts were then sent to a museum in Stavanger, Norway, where they will remain on display for another year.

The Fifth and Sixth Love Blankets (2012) 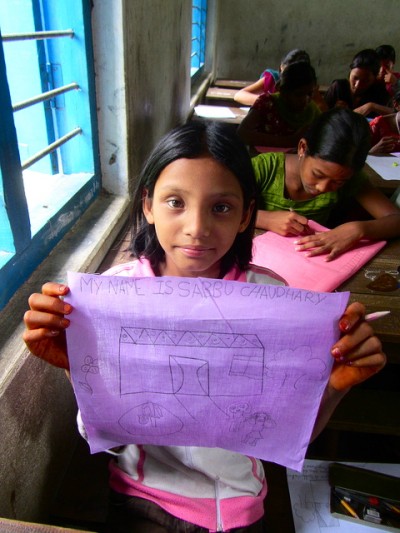 The last two blankets were made in the summer of 2012 from cloth paintings by former bonded laborers, who had been freed by BASE or other Nepali advocates and were being housed at the Lawajuni Hostel, in Dang District. The project was overseen in Nepal by Peace Fellows Rachel Palmer and Alex Kelly .

The squares were of a lower quality than in previous years. This might have reflected the dire background of the young artists, who had all worked in domestic service as kamlaharis. Some had started work at the age of five. One of the squares shows a young kamlahari at work and captures her despair. “I have to always cook and they will scolding me. Oh God, help me.”

Alex and Rachel brought back over 60 painted squares and AP turned to two experienced quilters – Onalie Gagliano and Susan Louis – to help bring them together into coherent quilts. Onalie had assembled a previous quilt from squares that were made by schoolgirls at Kakenya’s Center of Excellence in Kenya, while Susan was a newcomer to advocacy quilting. They produced two gorgeous quilts, and one was shown at the Kean exhibit through 2013. Susan, the quilter, attended the opening event.

AP and BASE have no immediate plans to produce more Love Blankets, although it is certainly possible. Our immediate plan is to produce a set of gift cards on the Love Blankets, which can be seen here and ordered online. Our main goal for 2014 is to ensure that the blankets are seen by as many people as possible in the global north, and use them to raise support for a project to prosecute employers in Nepal. AP will also approach selected schools and explore possible pen-pal relationships between students in the US and Nepal. The blankets will serve to whet appetites.

We welcome your involvement in this exciting program! Help us by exhibiting a blanket, developing a school project, ordering cards, or organizing a speaker’s event. Click here to view profiles of the young Nepali artists and contact us for information about speakers. Former Peace Fellows are available to talk about their work and child labor in general.

A girl being beaten by her employer. 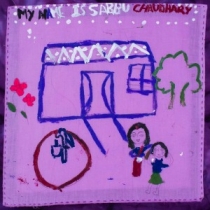 Painting by a former kamlahari documenting the physical abuse suffered from a former employer. 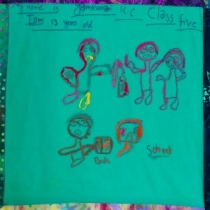 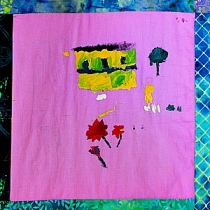 A painting made by an ex-kamlahari: In the painting, a girl pumps water for her employers. 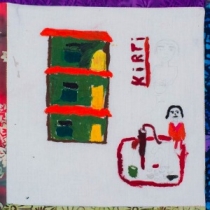 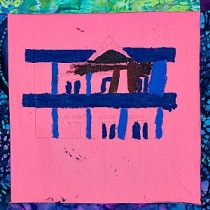 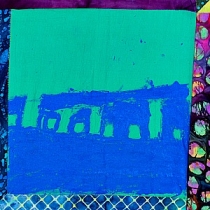 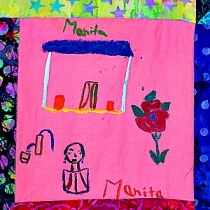 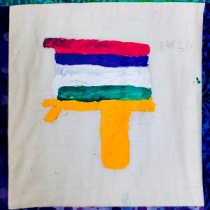 This poster can be downloaded and printed. Click on the image below. 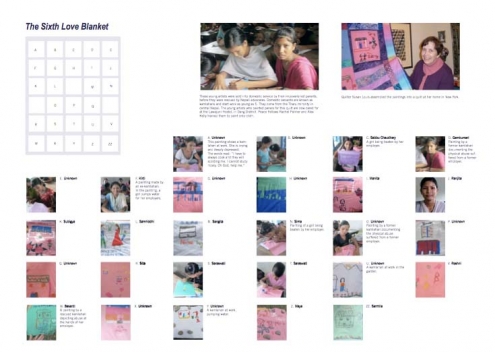