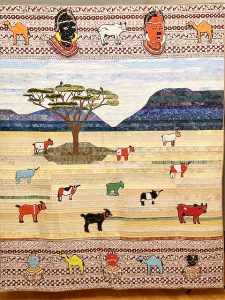 This quilt celebrates the importance of animals, particularly cows, in the life of pastoralists in northwest Kenya. Cows are the principal form of wealth in the region. They are also a cause of conflict, made worse by drought and climate change. 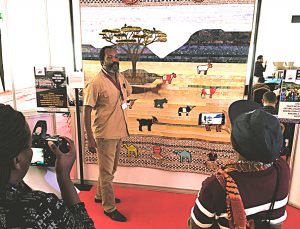 Hilary Bukuno, the founder and director of Children Peace Initiative Kenya (CPIK), uses the Cow Quilt while briefing the press about CPIK’s work at the ICPD25 conference.

The blocks were designed and made from beads by four artists from the Samburu and Pokot tribes: Salaiton Lenguris and Joyce Leiririo (Samburu), and Eunice Chelungi and Jepowakes Lemuyet (Pokot).

There are subtle differences between the two tribal styles. The Pokot heads (at the top) are larger than those made by Joyce and Salaiton, the Samburu. In addition, the Pokot cows are more tightly beaded but less lifelike than the Samburu cows. But both team shared the same commitment to the project.

Children Peace Initiative Kenya (CPIK), a partner of AP which works to promote peace between pastoralists, oversaw production of the blocks with help from three AP Peace Fellows – Talley Diggs, Colleen Denny and Ben Johnson. The blocks were were assembled into a quilt by Bobbi Fitzsimmons at her home in North Carolina, USA.

The quilt was shown for the first time at the UN summit on women and girls (ICPD25) in Nairobi, marking the 25th anniversary of the 1994 International Conference on Population and Development.

CPIK fielded a large team at ICPD25, headed by Hilary Bukono, a peace activist from the Gabra tribe in northwest Kenya, and the founder of CPIK. The team included Joyce and Salaiton, the two Samburu artists who made blocks for the cow quilt and were among the first mothers to participate in CPIK’s program in the northwest. It was the first time that Joyce and Salaiton had visited their own capital. 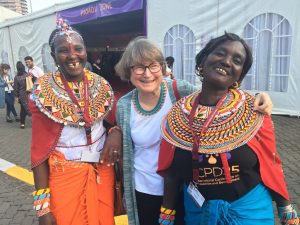 Joyce (left) and Salaiton (right) made cow squares for the Kenya Cow Quilt. Bobbi (center) produced the backing for the quilt and attached the squares. The three met for the first time at ICPD25.

As well as attracting a steady stream of admirers, the two artists were also delighted to meet Bobbi Fitzsimmons, who made the backing for their quilt. Bobbi joined the AP delegation at ICPD25 to help Kenyan artists assemble the Woman’s World quilt.

Joyce and Salaiton complimented Bobbi on capturing the magnificent, but arid, scenery of their area in their quilt. They also agreed that her design highlighted the threat from climate change, which is pushing pastoralists to take their herds into richer pastures – a major cause of the conflict.

CPIK and AP have agreed to make climate change a major theme of their partnership in 2020. The cow quilt to provide a graphic and authentic illustration. 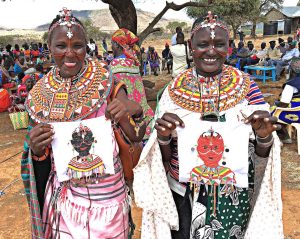 Joyce and Salaiton are from the Samburu tribe in northwest Kenya. They are seen here at a meeting in December 2018 between pastoralists from the Pokot and Samburu. CPIK used funds from AP to allocate cows to families from both tribes. 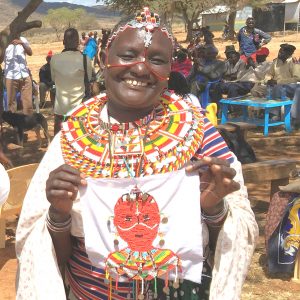 Salaiton (also known as Mama Caleb) has been an enthusiastic supporter of CPIK ever since she enrolled her son Caleb in the first Peace Camp in 2012. Mama Caleb had lost her father and a grandchild to the conflict and credits CPIK with helping to bring peace. Salaiton made her squares for the Cow Quilt with her Samburu friend Joyce, and accompanied Joyce to the ICPD25 conference in Nairobi in November 2019 – the first time she had visited the capital. She described the conference as one of the most exciting events of her life. Read Colleen’s blog. 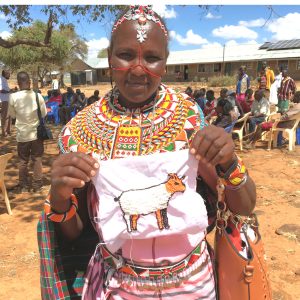 Joyce Leririo, a Samburu artist who is also known as “Mama Faith,” received a heifer for peace in 2015 from CPIK to share with the Mamkongs, a family from the Pokot tribe. Unfortunately, the heifer died, but Joyce remained friends with the Mamkongs because their daughters had become close at a CPIK peace camp in 2012. Joyce enjoyed making her squares for the cow quilt and was excited to attend the ICPD25 conference in Nairobi with her close friend Salaiton. The two women attracted a stream of admiring visitors and even sold some of their handicrafts on the side.  Read Colleen’s blog.