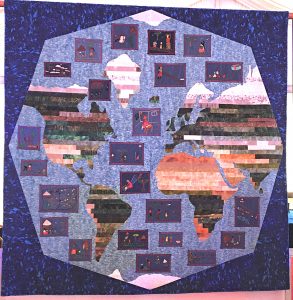 This quilt is a protest against the lack of services available to women and girls in the slum areas of Nairobi.

It was made by a team of women from the neighborhoods of Kangemi and Kibera for the UN summit on women and girls (ICPD25), held in Nairobi in November 2019. The summit was organized by the UN Population Fund (UNFPA). The artists hope to present their quilt to the Executive Director of UNFPA for use in her work on behalf of women everywhere. 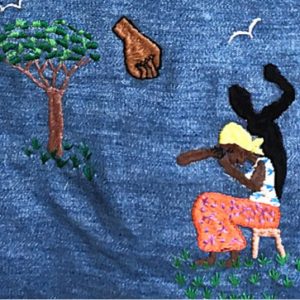 Anne’s block shows the ever-present threat from domestic violence that hangs over women and girls in poor neighborhoods.

The themes of the quilt were selected to align with the ICPD25, which relaunched and updated the agenda launched in 1994 at the International Conference on Population and Development in Cairo.

While UNFPA’s main focus remains on reproductive health and rights, the agency now works more broadly to empower and protect women and girls. The Woman’s World Quilt explores some of the main challenges, ranging from domestic violence to the lack of WASH facilities in slum areas. 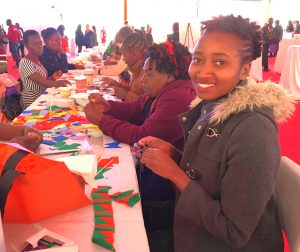 Anne was one of 25 Kenyan women and girls who joined the AP delegation at ICPD25, and made their voices heard through embroidery.

The backing for the quilt takes the form of a map of the world, and was made by Bobbi Fitzsimmons, a well-known American quilter and member of the AP Board of directors.

Prior to the conference, the artists received training in embroidery from Christine Kibuka, Gill Rebelo and Sigrun Hansen, who are active in the Nairobi Quilt Guild.  Christine, an experienced seamstress, supervised training. Gill coordinated and Sigrun handled logistics.

Helped by this experienced team, twenty-two artists described their experience though embroidery. Their blocks were then added to the backing and exhibited as a quilt for the first time at ICPD. The quilt drew many visitors at the conference, culminating in a visit by Mr Dereje Dorofa, the UNFPA Deputy Director General (photo). The artists and AP hope that UNFPA can take over the quilt and use it in advocating for its important agenda. 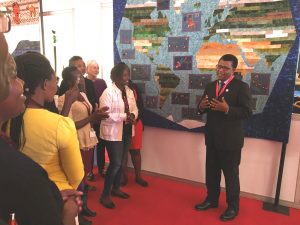 The quilt has produced other important outcomes. The artists completed their blocks during ICPD 25. This allowed them to participate in the conference – and thus represent the many millions of women who stand to benefit from UNFPA’s important agenda.

The experience of training and working together also created a real bond among the artists. AP hopes to build on this and offer them more training, perhaps in bag-making. That lies ahead.

Our thanks go in particular to Justine Coulson and Sarah Craven from UNFPA, who believed in this project from the start and made it happen, as well as to UNFPA for providing financial support. 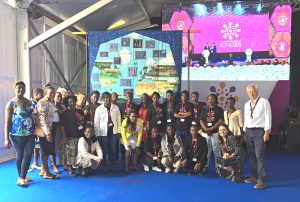 The Woman’s World Quilt was produced by a team of Kenyan fiber artists in the run-up to the UN summit on women and girls (ICPD25) in Nairobi, November 2019. Training was organized by Sigrun Hansen, Bobbi Fitzsimmons, Gill Rebelo and Christine Kibuka. The quilt was exhibited for the first time at the ICPD25 conference. 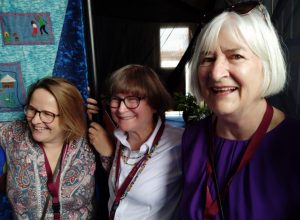 Sigrun Hansen provided logistical support for the training. Bobbi Fitzsimmons made the backing for the quilt. Gill Rebelo coordinated the training project. 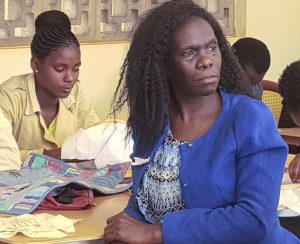 Christine Kibuka, seen here at the first training session is a Ugandan national. An experieced and talented seamstress, Christine has been stitching since her schooldays. She sells embroidery at her store in the Nairobi Maasai market. 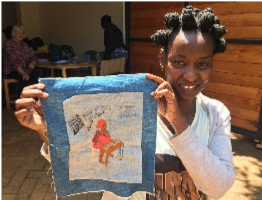 Stella – Education As a Way Out of Poverty

Stella’s block shows a woman who was abandoned by her father after she became pregnant. Pregnant for a second time, she has decided to take control of her life and return to school, even though it means being in the classroom with much younger girls. 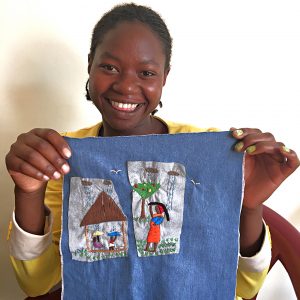 Brigit’s block shows a family using an umbrella against rain under a leaky roof. The pregnant woman on the right tries to find shelter under a branch. Poor shelter increases the chance of chest ailments. 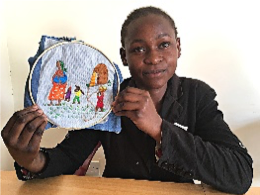 The girl in Betty’s block was forced to drop out of school during Class 8, after becoming pregnant. 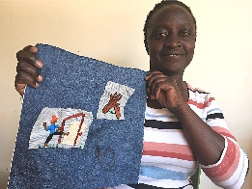 Caren’s block shows a young unemployed man breaking into the home of a woman, who throws up her hands in shock. 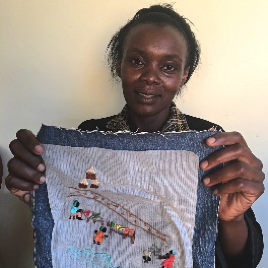 Loise – The Hazards of Informal Work

Loise’s square shows three women “selling goods by the side of a road in a slum.” This exposes them to harassment and even robbery. Left, tomatoes; center, cabbage and bananas; right, cooking chips. 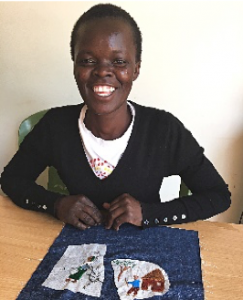 Lydia’s block shows a pregnant woman and child being driven from the family home by her drunken husband, who is angry because his wife burned his food. The woman is carrying their clothes on her head. Lydia accepts that the husband may be suffering from depression. 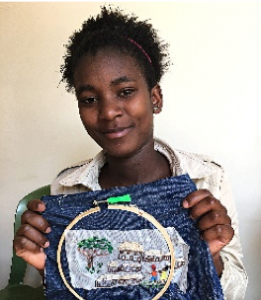 Emily is concerned at the poor living conditions that result from overcrowding in the village. There are not enough services and this causes disputes, particularly over water. 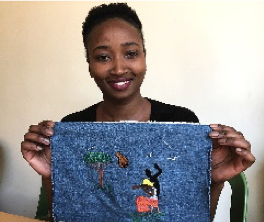 Anne’s dramatic square shows a woman cowering from her husband’s fist. The fear of violence is ever-present and haunts her like a black shadow. Anne has seen plenty of domestic violence in Kangemi, where she lives, and regrets that people are “afraid to talk openly about it.” 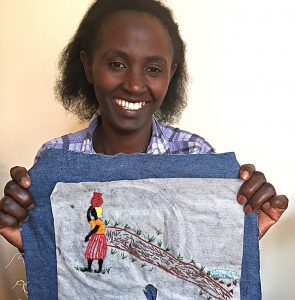 The woman shown in Susan’s block has collected water at a bore-hole and is now carrying it home in a jerry can. Susan knows what it’s like to carry water long distances: “Your shoulders hurt!” 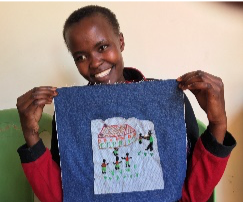 Caroline’s block shows a man selling drugs to school children. The drugs are hidden in cakes, which are shown in white and yellow. 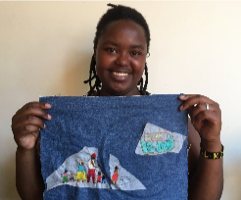 Harriet’s square draws attention to the chronic lack of WASH facilities, particularly toilets. People are seen lining up to use the toilets at the Kangemi Bridge, where they will pay 10 shillings a visit. The lack of WASH is a particular problem for women and girls, who often drop out of school during menstruation. 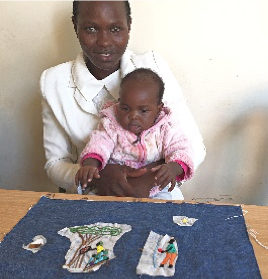 Irene and Rose – Education Without Classrooms

The lack of classrooms is a serious barrier to girl’s education. Irene’s block shows a teacher and her students, who are sitting on a bench. She is teaching under a tree because the school does not have enough classrooms. The blackboard is shown in red. 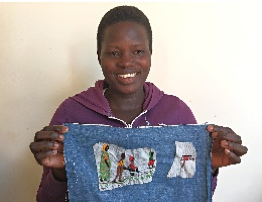 Health centers are a long way from Winnie’s house in Kibera, and this is particularly difficult for women and girls. Winnie’s block shows a sick person being taken to a center in a wheel barrow. Sometimes pregnant women have to walk to the center at night to give birth – with devastating consequences. 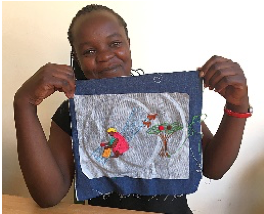 Beldine remembers how her family was forced to draw water from the river while cattle polluted the water upstream. 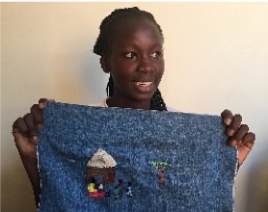 At 17, Sabina is the youngest member of the team and coest n age to school. She notes that tuition at primary school is free, but that families still have to pay a significant amount to cover the cost of exams, uniforms, and supplies. The cost was too much for the mother shown in Sabina’s block. She is doing what she can to educate her daughter at home. 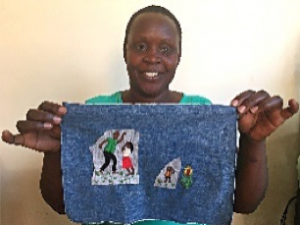 Cecilia’s block shows a man beating his wife, while their child covers his ears and runs into the garden. Cecilia says that domestic violence can be emotional as well as physical, and is often triggered by alcohol. 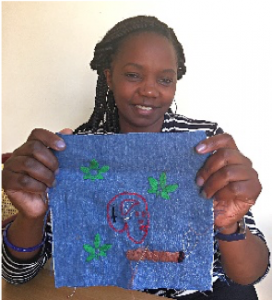 Eunice is deeply concerned by the impact of drugs on young people, particularly girls. Her graphic design is shaped like a human skull which is filled with addictive substances such as pills and cigarettes, as well as a syringe. 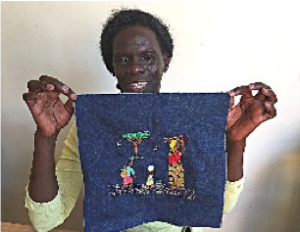 As well as leading the training, Christine made two blocks for the Woman’s World Quilt. This block shows girls helping their mother to carry water and firewood. Christine’s second block shows boys and girls making bricks, which puts them at risk from accidents and is also illegal.