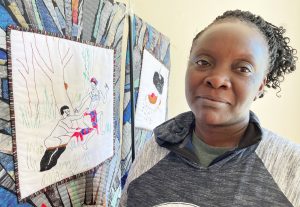 Victoria Nyanjura was kidnapped by rebels from the Lords Resistance Army and was forced to spend several years of captivity in the bush. She founded Women in Action for Women (WAW) for survivors and coordinated the making of stories for these two quilts 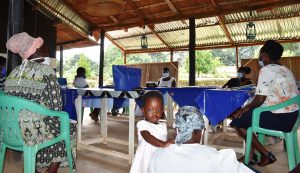 Between 1995 and 2003 the eleven Ugandan women featured in these pages were forced into sexual slavery by rebels from the Lord’s Resistance Army (LRA), the violent Christian organization that has terrorized Northwest Uganda for over 35 years.

The LRA emerged in 1987 on the back of an earlier uprising in the North led by a mystic, Alice Lakwena. Both movements were a response to the emergence of Yoweri Museveni as president of Uganda in 1986, and reflected the tensions that had existed between Uganda’s main tribes since the era of colonialism. The LRA is an extreme expression of Acholi nationalism. 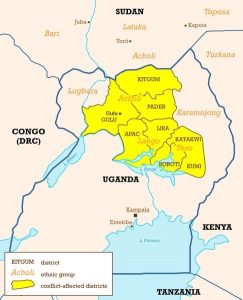 Led by Joseph Kony, the LRA quickly established itself as one of the most brutal and ruthless movements in Africa. The LRA made widespread use of children and made sure that its methods of recruitment would cause maximum terror. Rebels would move into a village and force children to kill their own families and even their pets. They were taken off into the bush and forced to take up arms. UNICEF estimates that over 25,000 Ugandan children were kidnapped by the LRA.

The government responded with extreme force and by 2005 over 1.7 million people had been displaced and were living in over 200 overcrowded displacement camps. Conditions in the camps were terrible and caused death, sickness and disability. By 2007 over 90% of the Acholi population in the three north districts had been displaced. 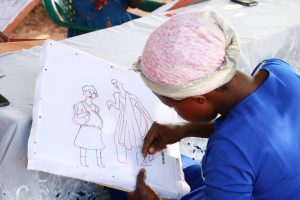 Concy at work on her story

The impact of this terrible conflict was felt most heavily by women and children. Women and girls were captured and taken off into the bush where they were forced into marriage and child-bearing, often with several fighters. These pages describe what this meant to victims. The artists were repeatedly raped, beaten and tortured. Five gave birth to children. Even after they managed to find their way home they faced social isolation and stigma from neighbors who viewed them as traitors.

Over twenty years later the wounds remain raw. It is particularly difficult for those who gave birth as a result of rape and are reminded of their ordeal by their own children. Hundreds of Ugandan women went through the same experience at the hands of LRA fighters and probably suffer from the same extreme form of torment.

These ten artists have been mobilized by a remarkable survivor of LRA terror, Victoria Nyanjura who has turned her ordeal into a source of strength. Victoria, seen in the photo on the right, was able to study in the US thanks to the generosity of an American family, and she re-payed their love by earning a Masters degree at Notre Dame University. She then returned to Uganda, where she founded Women in Action for Women (WAW) in Gulu Town. 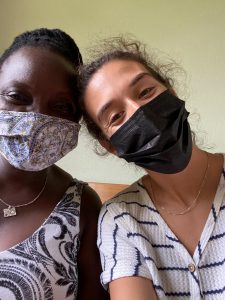 Victoria reached out to AP in early 2021, and developed a strong friendship with Anna Braverman, who worked in Gulu as an AP Peace Fellow in the summer of 2021. Anna and Victoria seen together in the photo, organized embroidery training for the WAW artists who produced the images seen on these pages. They are among the most disturbing stories ever produced under our quilt program. At the same time, the quality of the stitching is superb.

The finished blocks were brought to the US in late 2021 and handed over to two expert quilters. Anne Watson in North Carolina and Peg Sullivan in Massachusetts. Anne’s quilt takes the form of a triptych. Her powerful, jagged design is intended to portray the agony endured by the artists. Peg arranged her blocks around the Ugandan flag and used African fabric for backing. Our thanks to them both.

Under Victoria’s guidance, the ten WAW artists have continued to made good use of their stitching skills. In the Fall of 2021 they produced embroidered stories about their experience of the COVID pandemic as part of a global project by AP to describe the impact of the pandemic on marginalized communities. The WAW artists have also produced embroidered portraits of Africa bread which will be made into a quilt and sold. Victoria reports that her WAW friends have “fallen in love” with embroidery and would eventually like to earn a living from it. We hope to help by selling their stories through an online store which will be launched in the late summer. 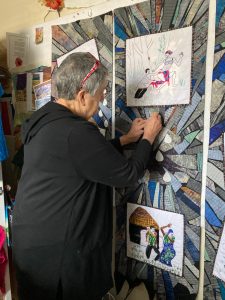 There is also movement on the horror that started it all. The LRA was the first case to be referred to the International Criminal Court in The Hague, in 2004 and following year the court indicted the LRA leader Joseph Kony. Kony is still at large but the court has indicted, arrested and prosecuted one of his top lieutenants, Dominic Ongwen. Ongwen was kidnapped by the LRA as a child and rose through the ranks to a position of power within the movement. He interacted personally with many of the artists featured on these pages. For more on the ICC’s investigation of crimes in Uganda since 2004, visit these pages. Click here to read more about the ICC’s case against  Dominic Ongwen. AP will assist Victoria’s group in seeking reparations from the ICC later this year.

One final note needs to be added about these pages. We are often asked whether it is responsible to identify victims of sexual violence. Many NGOs maintain that publishing names and photos furthers their dis-empowerment and risks exposing them to further stigmatization. We have faced this dilemma for almost 20 years and our response is always the same – the decision must be left to the women and their representatives (who partner with us.) In the case of these stories from Uganda, as in almost every other quilt project, the artists have offered their work and photos with pride. They view their stories as an act of empowerment and resistance. 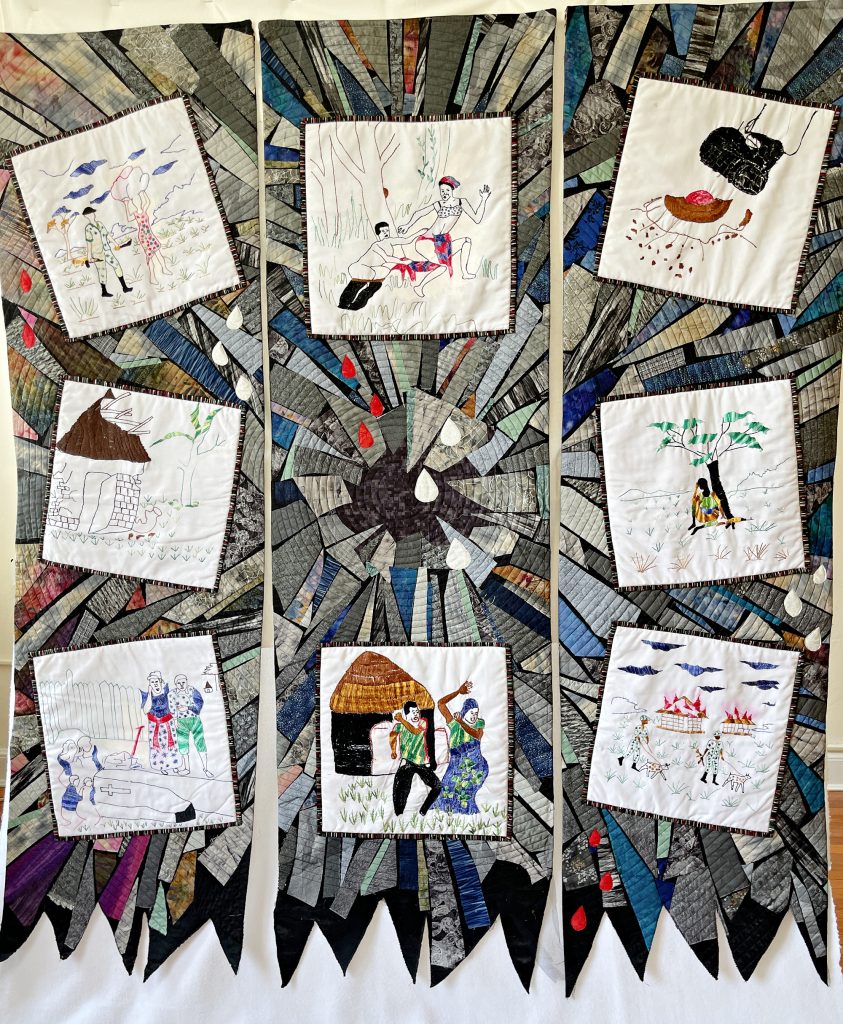 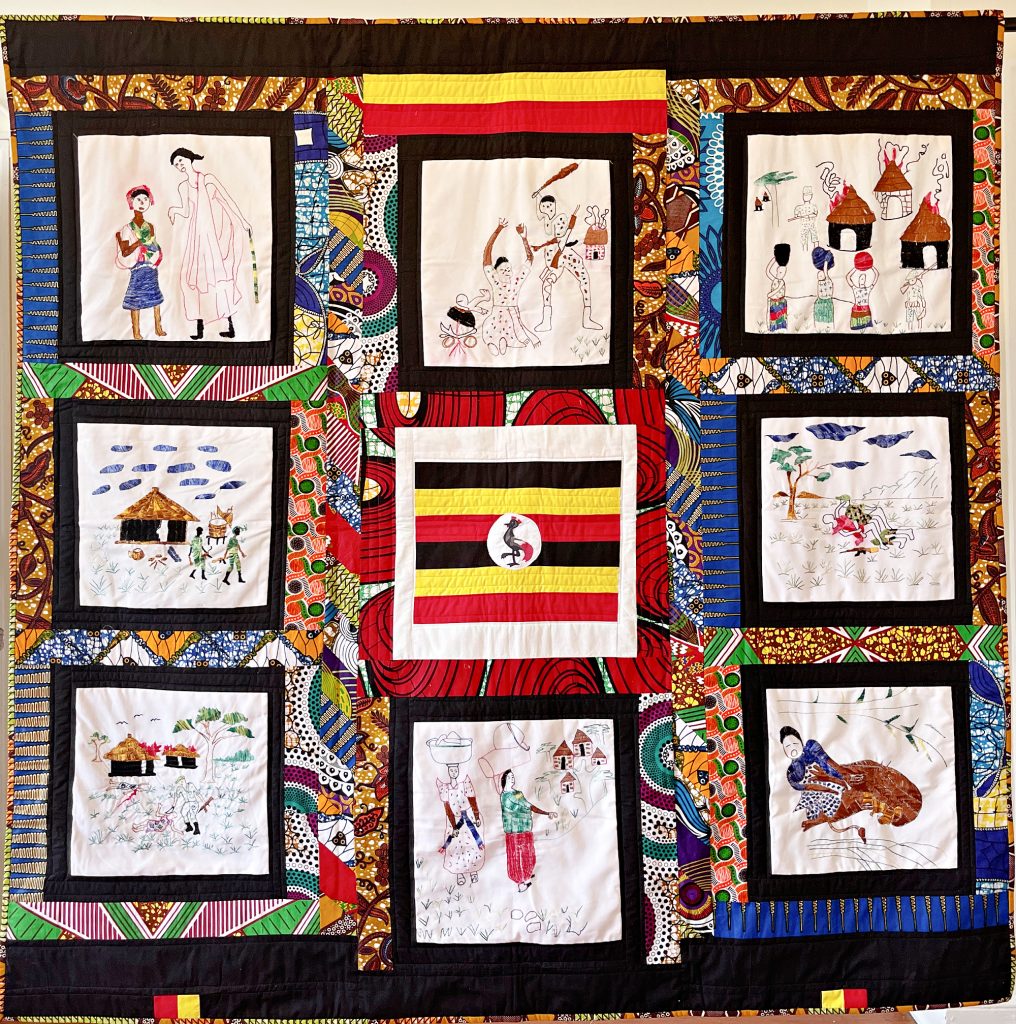 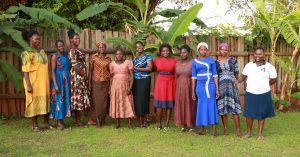