Washington DC, April 10: On July 17 1998, I watched as the Clinton Administration made a final, frantic effort to weaken the International Criminal Court (ICC) before it was put to a vote at a major conference in Rome.

The Advocacy Project (AP) was covering the conference for an international coalition of NGOs and I remember the uproar when the US finally voted against the ICC statute in the strange company of China, Iraq, Israel, Libya, Qatar, and Yemen.

Our reports then make ironic reading today at a time when the ICC holds the key to a credible international investigation of war crimes in Ukraine. Twenty-four years on, the US remains deeply suspicious. US Secretary of State Antony Blinken made no reference to the Court while laying out a 7-point response to Russian crimes during a recent trip to Brussels. Instead, he expressed support for Ukrainian investigations.

No disrespect to Ukraine, but this makes no sense at a time when the Biden Administration is seeking a coordinated international response to Russian atrocities.

The ICC could have been designed with Ukraine in mind. It was modeled on the two international tribunals that were established in the 1990s (with US support) to prosecute crimes in Rwanda and the former Yugoslavia. This background will help in exposing Russian atrocities that are beginning to resemble the behavior of Bosnian Serbs between 1992 and 1995 (photo below).

Added to which, the government of Ukraine has given the ICC authority to investigate, going back to the first Russian incursions in 2013.

Ironically, the very features of the ICC that anger the US are those that also allow the Court to act creatively in Ukraine and other complex conflicts. This begins with an independent prosecutor who can take the initiative (known as “proprio motu”) in launching a preliminary investigation even if the government in question has not joined the ICC treaty.

The US delegation opposed this provision at Rome partly because it raised the specter of an international Ken Starr roaming around the world seeking to ensnare Americans. The same concern continues to agitate American conservatives. In September 2018, the US National Security Advisor John Bolton lashed out at the Court in a speech to the Federalist Society, claiming that the ICC’s supporters were intent on targeting not just individual US service members but “America’s senior political leadership.”

After the ICC prosecutor Fatou Bensouda launched a wide-ranging investigation into the conflict in Afghanistan, President Trump froze her US-based assets – the same treatment now given to President Putin.

Most experts agree that there is zero chance of a mischievous prosecution by the ICC because three judges must give their approval for a full investigation. In addition, Karim Khan, the current prosecutor, is a seasoned British barrister with little interest in provoking the US.

Khan does not need permission from ICC judges to investigate in Ukraine because 41 governments have referred the case to the ICC. But his independence also gives him flexibility to work creatively in other complex humanitarian crises that are of keen interest to the US. He is currently investigating 17 cases. These include two that alarm the US – Israel/Palestine and Afghanistan. But most of the others align with US interests, such as Georgia, Myanmar, Libya, Mali and Venezuela.

The Court’s mandate allows it to investigate four core crimes – aggression, war crimes, crimes against humanity and genocide – and all are relevant to Ukraine. War crimes have clearly been committed but it is far from clear that the Russians are pursuing genocide, as the Ukrainian government and President Biden maintain. The use (and non-use) of this term has embarrassed the US in past conflicts, notable Rwanda and Sudan. The ICC will provide clarity in Ukraine.

The adoption of aggression by the ICC also looks prescient. The US opposed the inclusion of aggression in the ICC statute in Rome out of concern that it would usurp the role of the UN Security Council as the ultimate arbiter of war and peace. The discussion was postponed at Rome and taken up at subsequent ICC meetings which agreed to include aggression for governments that accept its jurisdiction. Forty-three governments have signed on and they include six – Estonia, Latvia, Lithuania, Georgia, Poland and Finland – that share frontiers with Russia and could be victims of future Russian aggression.

Overall, however, the relationship between the ICC and Council remains largely untested. The Council can refer cases to the Court when none of its permanent five members object, as it has done with Libya and Sudan. But it responded to the horrors in Bosnia and Rwanda by retaining control and establishing two tribunals. These were “ad hoc” precisely because they could be terminated by the Council at any time.

The conflict in Ukraine will hopefully force this uneasy partnership into the open as part of a broader rethink about the Council’s role in ensuring international peace and security.

Chapter 7 of the Charter even gives the Council power to use force in order to preserve peace, but Russia’s behavior in Ukraine exposes the cynicism and absurdity of this formula. The fact that a permanent member of the Council is allowing its troops to systematically kill civilians in pursuit of an illegal war is terrifying. Yet there is no chance that the Council will authorize a tribunal on Ukraine because such a decision would be swiftly vetoed by Russia. The case for an independent ICC that can serve as a counterbalance to the Council is overwhelming.

We can be grateful that the US campaign has not derailed the ICC, but it has delayed the Court’s coming of age and turned several US objections into self-fulfilling prophesies. The Court has been ratified by 123 governments, but the number should be higher. The Court has indicted 46 individuals, including current and former heads of state, but all have been from Africa.

This smacks of a double standard and has provoked an understandable backlash from governments in the South that were among the ICC’s staunchest champions at Rome and should be its natural allies in any Russian inquiry. Most African governments abstained in the recent vote to suspend Russia from the UN Human Rights Council and may not be inclined to back more forceful action. This might change if the US were to endorse a role for the ICC.

Can we expect a shift in US policy? Judging from Blinken’s announcements, not any time soon. With midterm elections approaching the best that can probably be hoped for is a return to the Obama years when the US suspended hostilities and even offered the occasional act of cooperation. One example occurred in March 2013 when the US handed over a notorious Congolese warlord, Bosco Ntaganda, to the ICC. Ntaganda had turned himself in to the US embassy in Rwanda.

President Biden could start by sharing information with the ICC through NATO, as in 1995 when American satellite imagery helped to identify mass graves around the Bosnian town of Srebrenica. The US could also donate to the Trust Fund for Victims which provides reparations under the umbrella of the ICC but also accepts private gifts. Presumably it would also welcome funds from governments that have not joined the ICC treaty. A US contribution would be bold and might not provoke howls of protest from Biden’s critics.

Certainly, President Biden must come up with something other than weapons and sanctions to combat Russian atrocities. Commonsense suggests that this should include the ICC. The Court has been accepted by two thirds of the world’s governments, including all but two members of NATO (the US and Turkey). Spurning such an obvious ally seems like a self-inflicted wound and will make it harder for the US to claim the moral high ground during the difficult months that lie ahead. 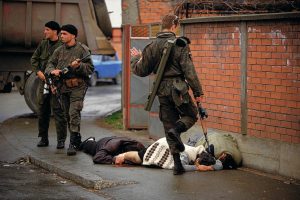 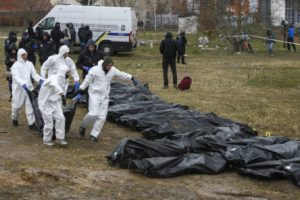