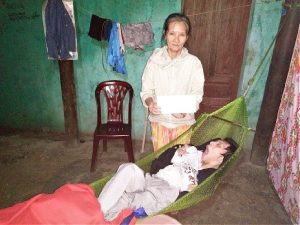 Twenty-two compassionate Americans have joined with a commune in central Vietnam to purchase a cow for Cao Ngoc Toa, a Vietnamese war veteran whose sons have been severely disabled by Agent Orange.

The gift was made possible after the 22 individuals donated $1,626 to a recent appeal by The Advocacy Project (AP) on behalf of Mr Toa and his wife, seen in the photo above.

AP’s partner in Vietnam, the Association for the Empowerment of Persons with Disability (AEPD), then used part of the money to leverage funds from the commune of Yen Hoa in Quang Binh Province, where the Toa family lives. Mr Toa also contributed from his savings. This was enough to buy the cow.

The AP appeal also allowed AEPD to purchase a cow for Hoang Thi Co, a widowed amputee who has struggled to support her two children, aged 9 and 3 (photos below). 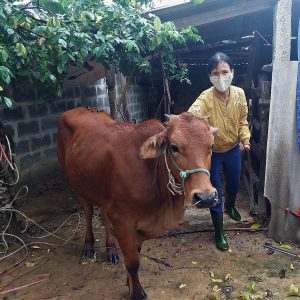 Ms Co and her cow

The commune’s role in Mr Toa’s project shows the depth of support in the villages of Vietnam for families poisoned by the dioxin in Agent Orange. The herbicide was widely sprayed by US forces during the Vietnam War and has bequeathed a legacy of suffering to future generations. Vietnamese authorities have estimated that over 3 million Vietnamese are affected.

Mr Toa was exposed to Agent Orange when he was stationed for a year close to the Ho Chi Minh trail, which was sprayed relentlessly. His wife was exposed while burying the bodies of slain soldiers.

The couple passed the poison to their sons Toan and Tien at conception, with devastating results. By their early teens, the boys were biting each other so savagely that they had to be placed in tents outside the house.

Adding to the family’s woes, Ms Luan underwent a spinal fusion. She and her husband were only able to provide food for 8 months in the year.

Ms Co, seen in the photo with her new cow, is the thirteenth caregiver in Quang Binh to receive support from AP and the AEPD since 2015.

All but one family have chosen cows because the animals provide a sustained source of income through milk and calves. Cows can also be rented out for farm work.

Although these projects would not have been possible without the support of the local communities, relations between Agent Orange families and their neighbors can be tense. One of the first caregivers supported by the program, Mai Thi Loi, was forced to restrain her oldest son in chains after he burned a neighbor’s house. Many Agent Orange families are isolated and keep to themselves.

AEPD is able to bridge the gap through outreach workers who have themselves overcome devastating injuries and are respected by villagers and Agent Orange survivors alike. Truong Minh Hoc, the AEPD worker who assists Mr Toa, was exposed to Agent Orange while serving in the Vietnamese army and seriously wounded in 1984 while deployed to Laos. 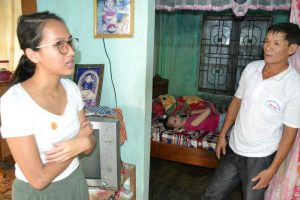 The success of the program also owes much to 12 graduate students who served as AP Peace Fellows at the AEPD between 2008 and 2019. Several have raised money for families, including Ai Hoang (Columbia University), whose own family fled Vietnam after the war. Ms Hoang is seen in the photo with Le Thanh Duc, another Agent Orange casualty, and his three disabled daughters.

Seth McIntyre (Brandeis) designed the program in 2014 and donated to the recent AP appeal. Marcela de Campos, a Brazilian national at the University of Maryland, raised money for two families. Mia Coward (UMD), the last Fellow to work in Vietnam before the pandemic, visited the families and found that their cows had produced a sustained income.

These and other Fellows were deeply moved by the patience and affection shown by ageing caregivers towards their stricken children. Jacob Cohn (Fletcher School at Tufts), who purchased a cow for the family of Ms Duong Thi An, wrote later that his own struggle with depression paled in comparison: “As unoriginal as this sentiment might be, I truly have found these families’ responses—their perseverance and willingness to keep hoping and dreaming—tremendously inspiring.”

Over $600 from the recent appeal has still to be spent and will be used by AP and AEPD to support another family in early 2022.