While thinking about how to approach this reflection about my time at AEPD, I went back and revisited the post I wrote about my first visit to a beneficiary family almost two months ago. Looking back on my conversation with Mai Thi Loi brought home two key points: I’ve gotten better at taking photos since then, and I’m as affected by her story today, my last day working at AEPD, as I was the day she told it to me. 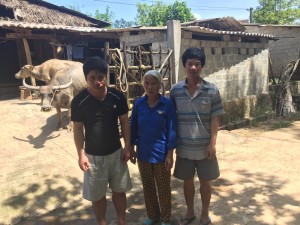 I’ve met a total of seven families (some more than once) who have at least one member disabled by Agent Orange. In most cases, even if only one or two members of the family are disabled, the whole family’s lives are contorted because of it—parents, or healthy children, must focus on caring for the disabled person while still working hard to support their family financially. That’s not even getting into a case like that of Pham Thi Do who has to support herself and her daughter while the rest of her family lives elsewhere with her ailing son.

Vietnam as a whole isn’t especially poor compared to some of the other places where the Advocacy Project works—but Quang Binh is a poor region of Vietnam without a lot of economic opportunities, and the curse of Agent Orange makes it even more difficult to make a living. These people have been through a lot and struggled with more adversity than most of us will ever experience—but the fact that they’re part of our program means they’re still striving for a better future and working hard to create better opportunities for their families. I’ve consciously tried to avoid uplifting, feel-good clichés in my writing, and done my best to just report on what I see and my feelings about it. (That’s included a few details like Mrs. An’s tears when thanking us for her new buffalo, which, while powerful in the moment, felt sappy enough when put in writing that I was tempted not to include it at all.) Nevertheless, as unoriginal as this sentiment might be, I truly have found these families’ responses—their perseverance and willingness to keep hoping and dreaming—tremendously inspiring. The director of the Advocacy Project, Iain Guest, told me during our training in Washington, DC a few months ago that everyone there who’d worked with Agent Orange victims had become emotionally invested in the work, and I’ve certainly found that to be the case. 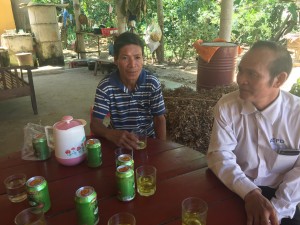 I haven’t talked about this enough on this blog, but I’ve also come to tremendously respect AEPD’s staff and all the work they do on behalf of disabled people here in Quang Binh. I’ve seen evidence of their work everywhere I’ve traveled in the province in the form of AEPD’s self-help groups, which create a space for disabled people to organize and work together for the benefit of all. AEPD’s outreach workers, all of whom are disabled war veterans themselves, travel throughout Quang Binh (which is slightly smaller than Connecticut, but with much longer travel times due to the rugged terrain) to form relationships in towns and villages around the province. Their clear dedication to their work, at an age where many would think about retirement, motivated me to work harder as well. AEPD’s director Hong and her sister and program manager Hao are talented, tireless advocates for the rights and dignity of the disabled, and the rest of the staff seems to share this motivation. They’ve also been tremendously welcoming and helpful throughout my time here. The families I’ve worked with and other people with disabilities in Quang Binh can be proud to have helped build up this organization as a resource and source of support. 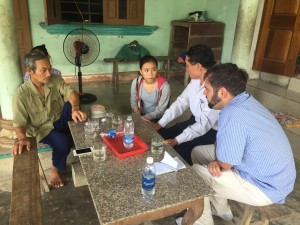 Meeting with Mr. Phan That.

This is meant to be a personal reflection—so what can I say about the work I’ve done here, and how it’s affected me? I admit I was skeptical of what I could accomplish here when I took the job, as an outsider with no Vietnamese language skills, very little familiarity with the culture, and limited expertise or work experience. The idea of me “helping” to alleviate such a complex, insoluble problem as Agent Orange seemed naïve, perhaps even a bit arrogant. I can’t be certain of the extent to which I’ve helped (and prefer not to dwell on how the families I’ve worked with could have used the money spent to get me here), but I’ve at least accomplished or exceeded most of the goals I set when I arrived. I’ve made some of AEPD’s proposals and literature more effective through my writing and research skills, and I’ve helped inaugurate AP’s program for local college students with Dat, our associate, who’s taking over some of my responsibilities now that I’m leaving. I put together our campaign for Mrs. An and saw it through to completion, an experience I expect will continue to resonate long after I leave here. Most importantly, I’ve done and will continue to do my best to spread the word about Agent Orange and its continuing impact on the Vietnamese people, a subject with which many Americans (including me, before I came here) are unfamiliar. As I’ve said previously, I think this is an important topic for us to confront as people of conscience and as informed citizens, and if I can make a small contribution to that, my work here has at least meant something.

Also, this hasn’t really come up much on this blog, but I’ve had a lot of fun here in Vietnam. I had never been to Southeast Asia before, and it’s been amazing to get to explore the country and particularly Quang Binh (a part of Vietnam with gorgeous mountains, forests, and beaches) and become acquainted with the culture. Considering the fact that I originally applied to the Advocacy Project fellowship program with the idea of going to Kenya, and had no special knowledge of or affinity for Vietnam, my time here was an especially eye-opening experience, and I hope to return before too long to explore Vietnam further (Full disclosure: I’m taking a short vacation before returning home to do some of this). I’ve discovered lots of new foods, explored cities and villages and caves, and gotten to know people in Quang Binh and elsewhere. I even got a nice suit. 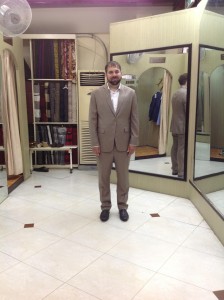 I’ve never lost sight of why I’m here, though. And I have no doubt that my work at AEPD is going to be an experience that I look back on and think about long after I return home.

I am someone who’s periodically struggled with anxiety and depression throughout my adult life. I don’t mention this to point out that working with people whose lives have been molded by hardship has made me feel fortunate in what I have—that’s certainly true, but I don’t think it has much to do with mental health. Still, I’ve been blown away by the generosity of the people I’ve met in this job, who’ve welcomed me so warmly and shared their experiences—and especially by the resilience of the caregivers I’ve had the good fortune to talk with, people who remain devoted to beating the odds and fighting for a better future for their children, all while doing the emotionally and physically draining everyday work of caring for a disabled relative. Even though I’ve had previous jobs that focused on serving others, having the chance to share these people’s stories with the world and to make it easier for them to achieve their goals will probably be one of the most fulfilling experiences of my career even at my career’s end. I don’t know what this will mean for my career or for my personal development, but I can certainly say I’ll be bringing a lot more than souvenirs home with me from this trip. 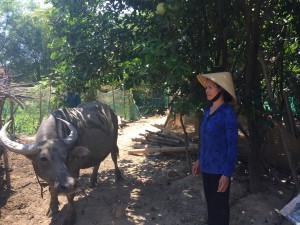 Mrs. Duong Thi An with her newly purchased buffalo.