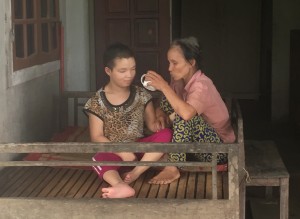 Pham Thi Do caring for her daughter Luyen, who is afflicted with cerebral palsy.

While reading our previous posts about this family, I’d been particularly intrigued by their son Toan, who developed a talent for making handicrafts and models despite losing the use of his legs at an early age; he’s converted part of the family’s home into an artist’s studio and has sold some of his work through AEPD. I was disappointed to learn from Mr. Thuan, on the way to meet the family, that we wouldn’t be able to meet Toan on this trip. My disappointment soon turned to horror as I learned more about the family’s current situation, possibly the worst of any family I’ve met so far.

Pham Thi Do and her husband Nguyen Van Xoan live around 15 minutes north of Dong Hoi, in a rural village—their home is larger than those in the city. The house appears empty as we arrive in the front yard, but Mr. Thuan walks over to a wooden bed next to the wall, and I’m startled to see the family’s daughter, Luyen, lying inert on a mat. Flies buzz on and around her body while a dog rests underneath the bed. Luyen is afflicted with cerebral palsy, and when Mr. Thuan speaks to her she stirs and sits upright slowly, with obvious difficulty. She can’t speak but seems glad to see Mr. Thuan, who stands with her for a few minutes until Mrs. Do arrives to invite us inside her home. The living room features large portraits of their two older (healthy) children at their weddings, certificates honoring Mr. Xoan’s military service, and commemorative plates bearing the likenesses of Ho Chi Minh and American War-era military leader Vo Nguyen Giap. Clearly Mr. Xoan is proud to have fought in the American War, in spite of all the pain that would come after. 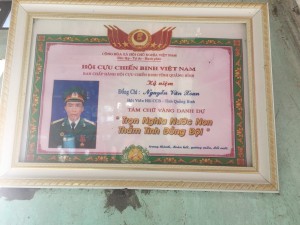 Normally, this house would have five inhabitants: Mr. Xoan, Mrs. Do, Luyen, Toan, and Toan’s older brother Trung (who has difficulty walking). But for almost 6 months Mrs. Do and Luyen have lived by themselves. Toan, a hemophiliac, had a “shock” earlier this year—I don’t press for details about this but I gather it involved serious internal bleeding—and needed to be hospitalized in Hue, the nearest big city (around three hours away by car). Toan used to go to Hue every month for treatment, at great expense, but since his shock he’s gotten “worse and worse,” Mrs. Do says. Coming to the hospital from so far away is no longer feasible for him, and the family’s health insurance wouldn’t pay for a hospital stay longer than 10 days.

With no other option to prevent his son from getting even worse, Mr. Xoan has rented a room in Hue, where he and Trung now live full-time and care for Toan. By being close to the hospital, Toan can remain under observation and get the treatment he needs even without staying in the hospital full-time. But this means that Mrs. Do, now the family’s primary breadwinner, must care for her daughter alone as well as keeping up the household in her husband’s absence.

Mrs. Do tells me that one of the few bright spots for her this year has been her buffalo, bought with funds from AP donors last summer. The buffalo is in good health, and she’s used it for farming—much of her yard is taken up by okra plants. Her cousins and other neighbors have done what they can for her, helping with chores and with caring for Luyen, and she’s gotten help with money from the community and from organizations like the Red Cross, the Vietnam Association of Victims of Agent Orange/Dioxin (VAVA), and the Women’s Union. Still, this is a very difficult time for Mrs. Do, and I can tell everyone in our party is as touched as I am by what this family is going through. 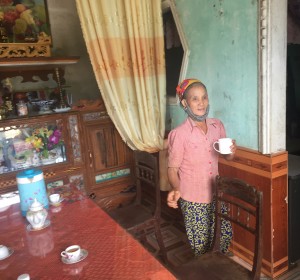 Pham Thi Do in her living room. She currently lives alone with her daughter Luyen.

Mrs. Do tells me that she’s in daily contact with Mr. Xoan by phone for updates on Toan’s condition, but she cannot visit Hue herself—that would mean leaving Luyen behind since she cannot travel. I ask Mrs. Do (delicately, I hope) if she sees a chance of Toan getting well enough to come home. “I’m not sure,” she responds; even if he were able to come home, he’d need to be in the hospital a lot, and traveling to Hue is time-consuming and expensive. Though none of us say so outright, her description implies that she may never get to see her son again.

The hot weather makes Luyen more “violent,” Mrs. Do says, but otherwise her condition is unchanged, and there’s not much that can be done for her except constant care and medication. Mrs. Do hopes to eventually move Luyen to the mental hospital currently under construction in Dong Hoi, where she can be cared for by professionals. “Does she have any understanding of what’s happening to her brother?” I ask. “Not at all,” Mrs. Do says.

Mrs. Do takes us to visit the buffalo in a nearby barn, where we’re joined by an officer from VAVA. The buffalo is due to give birth in July, and she asks me for AP permission to sell the calf—I respond that she doesn’t need permission, since the buffalo belongs to her. I resolve to think about any more ways AP could support her, though none of the problems she faces have easy solutions.

As we leave, Dat repeats something Mrs. Do said that wasn’t translated during our conversation but which obviously moved Dat: “Possessions cannot make humans, but humans can make possessions.” In spite of the hardships she’s already endured, Dat explains, Mrs. Do would give up all she has for her children.