Last Friday I had the privilege of meeting three more of the Advocacy Project’s beneficiary families here in Quang Binh Province, families that have been ravaged by the effects of Agent Orange. With AEPD outreach worker Mr. Thuan, staff member Ngoc and AP associate Dat, I headed out to meet the families of Le Van Dung, Pham Thi Do, and Le Thanh Duc.

These are all families that have already received funding through the generosity of AP’s donors, and I’m mainly visiting to check up on how everyone is doing and how the businesses that AP has helped them start are faring. However, I would soon be reminded that AP’s support, while welcome, is no shield against misfortune. 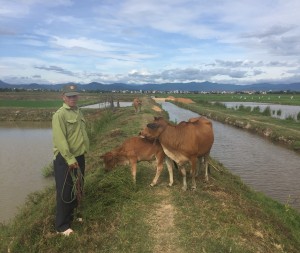 Mr. Dung with his cow and calf, funded by AP donors.

Le Van Dung and his family live in a neighborhood on the outskirts of Dong Hoi, the provincial capital where AEPD is based, so it only takes us around 10 minutes to reach him. Mr. Dung and his wife, Dan Thi Miet, live in a house typical of the area—it has several rooms and a front courtyard. We sit down with Mr. Dung in the foyer/living room of his house; Mrs. Miet also joins us, but Mr. Dung does most of the talking, a pattern I’ve seen in other families here.

As explained in greater detail here, Mr. Dung and Mrs. Miet both served in the North Vietnamese military during the American War, with Mr. Dung seeing active combat. While fighting in Quang Tri Province, close to the border between North and South Vietnam, US forces sprayed the dense jungle sheltering his unit with Agent Orange, exposing them to the poison. Mr. Dung and Mrs. Miet attempted to build a family after the war ended, but tragedy haunted them as 12 of their 13 children died in infancy. Their surviving daughter Thuy (who lives elsewhere in the city) and Thuy’s daughter Thao have experienced illness linked to Agent Orange.

Mr. Dung bought a cow and calf with AP funding earlier this year, and he tells me that not much has changed since then—both are developing “very well.” He’s had to work a bit harder to take care of the animals and plant grass for them to eat, but it’s “not too hard,” and the additional income is well worth it. Mr. Dung can’t have a full-scale farm in the city, so instead he hopes to raise and sell the calf, breed the cow again, and use the cow’s manure to fertilize the plants he does have.

Last year we’d planned to buy him a cow and a sugar cane press, which he could use to produce sugary drinks to sell from his home, and I ask him why he changed his request. Mr. Dung says that he wanted to earn money from a new source, and that he believed a calf would allow him to earn more money more quickly. Since his home is on a side street, Ngoc says, it’s not a good location for selling drinks. Mr. Dung says he’s still hoping to get a cane press for his daughter Thuy (who sometimes suffers from headaches and depression but is otherwise healthy) so she can open a business of her own, but his own health is fragile enough that he doesn’t want to create more work for himself right now. Mr. Dung tells me that Agent Orange has contributed to the worsening of his health—he’s developed a “heart condition” (Ngoc clarifies that this is not a heart attack) in the last year and now relies on medicine to keep going. He shows us some of the medications he takes—it seems like a lot for one man.

The couple’s granddaughter, Thao, lived with them during our last visit, but Mr. Dung says she’s living with her mother now. They’d previously taken in their nephew Duc, son of Mr. Dung’s late brother, who also suffers from Agent Orange poisoning and is confined to a wheelchair—since the spring, however, Duc has lived with his own mother. Now it’s just Mr. Dung, Mrs. Miet, and their other granddaughter Nan living here; Nan is with other relatives for the summer holidays, so we don’t get to meet her.

Thao’s eyesight is slowly deteriorating, and Mr. Dung tells me that hasn’t changed since our last visit. Mr. Dung took Thao to see a doctor in Hanoi, who said that Thao can undergo surgery when she turns 18 (she’s 9 now) to try to reverse these effects, but it’s possible that by the time she’s old enough for the procedure her eyesight might be totally gone. Mr. Dung and Mrs. Miet are hoping that Thao’s sight will last another nine years, but Mr. Dung says it’s not entirely certain the surgery will work even if that happens. Nan, meanwhile, has developed kidney disease in the last few years (she’s 14), which they are treating with traditional remedies; it’s unclear whether this has any connection with Agent Orange.

After I take photos of the couple and the house, we leave and travel around a quarter-mile to a large collective farm field to see the cow and calf. While traversing the field we see—and hear—a passenger jet passing overhead; this neighborhood is very close to the Dong Hoi Airport. Dat later informs me that Mr. Dung complained of gasoline fumes from the airport, and of airplane noise disturbing the family’s sleep. They’ve complained to the local government, but there’s little to be done.

We see the cow and calf, who indeed look healthy as they graze peacefully in the field next to a large rice paddy. As we prepare to leave, Ngoc tells me that this is the last collective rice field in Dong Hoi, and that there are plans to develop the area to accommodate the growing city. “If they get rid of these fields,” I ask, “what happens to the animals?” She shrugs.