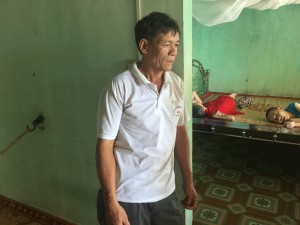 Le Thanh Duc, with his daughters Phuong (left) and No (right) in the background.

The village where Le Thanh Duc’s family lives is around 15 miles north of Dong Hoi, nestled among sand dunes near the Pacific coast. In the wake of our harrowing visit to Pham Thi Do, Mr. Duc’s warm, cheerful greeting as we arrive feels a bit jarring. That feeling only increases when we see what awaits us inside the house.

Mr. Duc’s house is fairly large, and we once again sit at a table in the foyer. As soon as we enter, I see two girls sprawled on a bed in a room to my right—these are Mr. Duc’s children, Phuong and No. Both are paralyzed and unable to speak or move; they make groaning sounds throughout our visit, which their parents can apparently understand. Another paralyzed girl, Lanh, lies on a bed in her own room to my left. Phuong and No, in particular, don’t look comfortable—their gasps put me in mind of fish out of water.

In addition to Mr. Duc, we’re joined by his wife, Ho Thi Hong (who looks frail and says little) and the president of the local branch of the Vietnam Association of Victims of Agent Orange/Dioxin (VAVA). Mr. Duc (as described here) was contaminated while serving in the military after the American War, during a cleanup operation at Da Nang Airport; he would later suffer from fevers and other ailments linked to Agent Orange, and the first three of his six children were born with disabilities, as we can see. I’m startled to realize at this point that the three daughters, who I would have assumed to be in their teens, are all well into adulthood—Phuong is 34, No is 31 and Lanh is 25. Whatever ailment has caused their paralysis has also kept them from growing into adults. 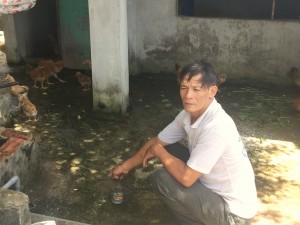 Mr. Duc with some of his chickens.

Mr. Duc had previously gotten a loan from AEPD to start a fish sauce business, but that business collapsed last year after a mass die-off of fish in nearby waters, believed to be the result of contamination from a steel plant. Undaunted, Mr. Duc, with the support of AP donors, bought three pigs and 80 chickens to raise in an enclosure behind his house. Mr. Duc tells us that a decline in the pork market forced him to sell his pigs, but that he still made a profit of 4 million Vietnamese dong (around $175), which Ngoc tells me is a respectable amount. He’s still raising his chickens, and has made another 4 million dong in net profit from them in the past few months; if the pork market improves, Mr. Duc says, he may buy more pigs to raise. Having a variety of animals is “very useful” for making money, he says. 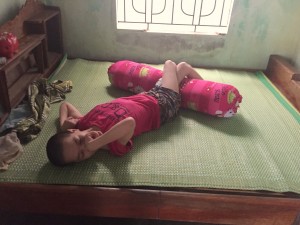 Mr. Duc seems optimistic about his business, but the tone of our conversation shifts as the subject turns to his children. Phuong, No, and Lanh are getting “worse and worse,” Mr. Duc says, and due to his wife’s weakness he’s the only one who can properly care for them and “release their pain.” The children are now unable to leave their beds. In the past he’s taken them to doctors, Mr. Duc says, but “no one can help them.” Lanh, I learn, can actually use a smartphone to send basic text messages to make her needs known, and can use it to browse social media, watch movies, and otherwise keep herself occupied. Unlike her sisters, Lanh was able to go to school until she was 9 and is thus able to read and write. Phuong and No can understand speech to some extent, but cannot communicate outside of the groans we hear.

At this point I ask about the health of Mr. Duc and Mrs. Hong, and Mr. Duc tells me that they’ve had “many difficulties.” It’s getting harder and harder to care for his daughters as he ages, he says, and he fears what will happen when he’s no longer able to keep up with them. Mr. Duc has three healthy children, and he’s hoping they can care for their sisters after he dies, but that’s only a hope—they have their own families to care for as well. “He’s very sad when he thinks about the future,” Dat tells me. 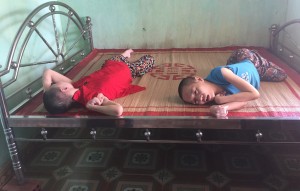 Mr. Duc’s daughters Phuong (on the left) and No (on the right).

Throughout our conversation a few children, presumably healthy grandchildren of Mr. Duc and Mrs. Hong, run around the house, their hyperactive energy contrasting with the mood of the visit. I see one of them jump on the bed where Phuong and No, his paralyzed aunts, lie, before getting bored and heading off somewhere else.

Despite his anxiety about the future, Mr. Duc says he’s hopeful about expanding his business; he’d like support in opening a grocery store to bring in more income, leading to more savings. He had wanted to open a grocery store before instead of raising animals, he says, but even with AEPD support the amount of capital needed was too great. In the meantime, he’s doing well raising chickens, and gets support from AEPD, VAVA and other organizations; he is active in one of AEPD’s local self-help groups for disabled people. The government has helped some, he says, but government support can only go so far—there are many Agent Orange aid recipients in this region, and a limited amount of aid to give them.

His “last wish,” Mr. Duc says, is to start a savings account, possibly with outside help, and raise money to ensure that his children are cared for after he dies or becomes too frail to carry on. With enough money, Mr. Duc could either hire a caretaker to look after his daughters or send them to the mental hospital currently under construction in Dong Hoi, where they could be treated by professionals. But he would still have to pay for their upkeep in the hospital, so it’s uncertain how realistic that option is. In the meantime, I tell Mr. Duc that we’ll do what we can to support his family and his new livelihood.