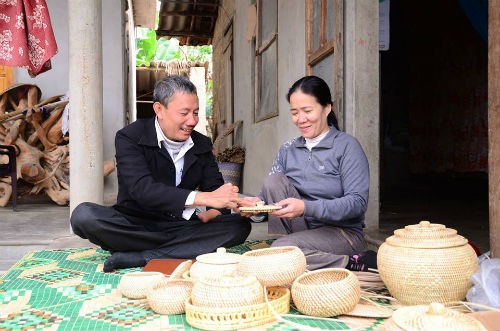 Mr. Luu’s long-term service with AEPD is incredibly remarkable, thirteen years serving some of the most vulnerable and underprivileged people in Vietnam. Mr. Nguyen Van Thuan is another outreach worker on AEPD’s team showing the same level of determination and commitment as Mr. Luu to doing good. To hear Mr. Thuan tells it, he became a security guard for the Landmine Survivor Network’s office around the time that Mr. Luu started working there as an outreach worker. Soon, he realized that he wanted to take on a more active role within the organization, so he consulted his friend, Mr. Luu, who knew that Mr. Thuan would be a great candidate for the job. They worked together through the recruitment process and remain friends today.

Mr. Thuan is no stranger to the obstacles that all Persons with Disabilities (PWDs) face on a daily basis. When he was only nineteen years old, Mr. Thuan joined the army as a young engineer. He enlisted in May 1978. Merely three short months later, Mr. Thuan embarked on a mining mission in Cambodia that would change the course of his life forever. While Mr. Thuan was working, a landmine accidentally exploded as he was holding it, blowing up his entire left hand and three fingers on his right hand. He returned home with no job prospect and no way to earn an income. Mr. Thuan began gathering wood and cassava in the forest to make a living. One of his biggest obstacles was that he didn’t have any form of transportation besides his bicycle at that point. 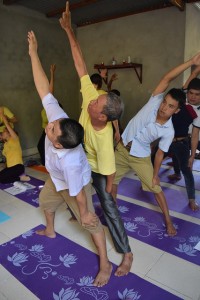 Mr. Thuan at a yoga training for PWDs.

In 1984, Mr. Thuan got married and became a parent for the first time. Knowing that he now has a family to support motivated Mr. Thuan. He bought a motorbike and taught himself to drive. Mr. Thuan and his wife opened up a sugar cane stand. The family still runs their sugar cane and grocery business at the local market today. In fact, at a recent yoga training session for PWDs of Quang Binh at his home, Mr. Thuan served all participants freshly made sugar cane juice! Mr. Thuan and his wife worked hard to grow their stand into a successful business.

As Mr. Thuan & his family saw their economic situation improved, he also wanted to give back to the community so he jumped at the chance to apply for the outreach worker position. Many survivors feel quite inferior to other people in their community. Therefore, they shy away from society, hiding in their home. Mr. Thuan is no stranger to these feelings himself. His no-nonsense support is what many PWDs in Quang Binh need to start on the road to recovery.

I think Mr. Thuan is best described through the words of some of the people he has worked with. During my first week spent at AEPD, I was able to go on a field visit with Mr. Thuan, a photographer from Irish Aid and a few local staff members. One of the first homes I visited was the home of Mr. Luong. who is also a landmine survivor. He is in his twenties, married with two young children. His accident was caused while he was out working the field. As Mr. Luong was burning some crop, he unknowingly applied too much pressure and heat to an area of the field contaminated by a landmine, which detonated. Mr. Luong woke up in a hospital bed only to find his eyes damaged and both of his hands gone.

When asked about his experience following the horrific accident, Mr. Luong said, “After it happened, I began avoiding all of my friends and family. I was depressed and afraid that if people saw me around town, they would get scared. I just wanted to hide inside my house. My wife had to take care of me everyday. I couldn’t really do much on my own. When I met Mr. Thuan for the first time, he immediately lectured me for letting my wife do so much for me. He told me I was a perfectly healthy and capable young man, who had to start taking care of himself. When I saw how amazing he is at not letting his disability control his life, I wanted to learn from him. Mr. Thuan is especially skillful with using his arms so I followed in his example. He helped me overcome my depression and got my life back on track. With his support, I learned to row a boat on the river out back so I could raise fish to earn a living. AEPD helped my family set up a grocery stand out front so we can add to our income.”

Later that day, we stopped by the home of Mrs. Huong, a local tailor. Mrs. Huong was born with her disability while her husband, Mr. Nam, lost his arm during a work accident in Ho Chi Minh City. The couple met while at a singing rehearsal at a performance organized by AEPD. Mrs. Huong received training from AEPD to become a tailor. The happy couple was expecting a child when we visited. When we asked Mrs. Huong to keep us updated on news of her pregnancy, Ms. Huong exclaims, “Of course I’d tell Mr. Thuan! He’s like a second father to us!” With one simple statement, Mrs. Huong has helped me to understand just how important Mr. Thuan’s work is to his community.

Mr. Thuan is an excellent example of why the peer-support model works so well. He not only understands what PWDs are going through, he also knows what it would take for them to conquer their obstacles and overcome their toughest struggles. His no-nonsense manner and determination allow him to help many people in dire situations adapt and overcome. After all, Mr. Thuan has been through it all once before. 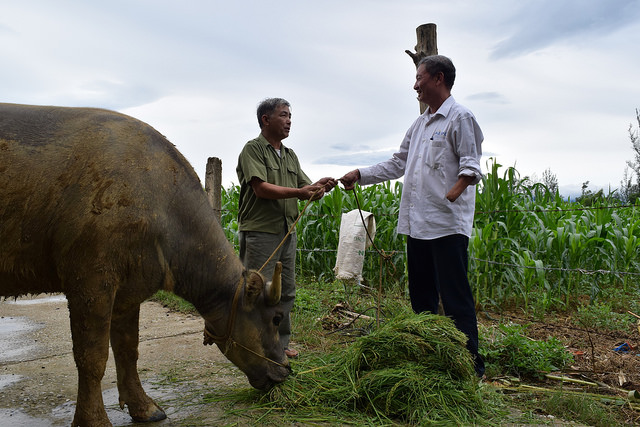 Mr. Thuan with one of the AO families we successfully fundraised for in 2016.