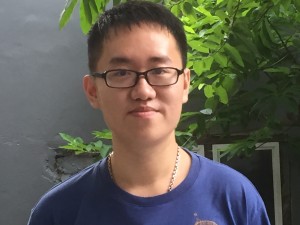 Tien Dat Tran on his first day as an AP Local Associate at AEPD.

AEPD is an organization that works to empower the disabled, but the newest member of its team was first drawn to serve a different group of people in need: children.

22-year-old Tien Dat Tran has previously served as a volunteer at the SOS Children’s Village, a program that provides foster care and social programs for needy kids here in his hometown of Dong Hoi; he spent last summer at the village as a volunteer martial arts teacher. Dat’s instinct to care for and teach children and his experiences with disabled people drew him to work at AEPD.

“I’ve talked with a lot of children who lost their parents, and seeing stories of parents raising children with disabilities inspired me…I think for their parents it’s very hard to raise them,” Dat says. “I have sympathy for them but I can’t do anything, so I want to do what I can for them.”

Dat has joined AEPD this week as the Advocacy Project’s first-ever Local Associate, a paid internship program for university students from the countries where AP sends peace fellows, who will partner with fellows to supplement and expand their work. AP is hoping that Dat will be the first of many local associates working at partner organizations around the world, and AEPD plans to continue the program after Dat’s departure. Dat is already intimately familiar with AEPD: his aunt Nguyen Thi Thanh Hong is the chair of AEPD, and during our conversation he cited one particular project—helping a veteran open a souvenir shop in the nearby tourism-heavy town of Phong Nha—as an inspiration for joining AEPD.

Dat is a native of Dong Hoi and is spending the summer break here with his family, but this fall he will enter his fourth year (out of five) at Da Nang University of Technology, located in the much larger city of Da Nang a few hours south of here, where he studies information technology and engineering. (American readers, incidentally, may also recall Da Nang as a major staging area and air base for the US military during the Vietnam/American War.) In his spare time, Dat enjoys playing badminton (in high school he won third place in a local competition) and practicing martial arts, both karate and traditional Vietnamese martial arts. He’s also fond of karaoke and the video game League of Legends.

Dat will be serving in a variety of roles at AEPD. His IT skills and his knowledge of both Vietnamese and English (abilities I don’t have, by the way) put him in a great position to improve AEPD’s website, and he’s already working on two translation projects: translating content on AEPD’s Vietnamese website into English, and translating information on Agent Orange from AP’s website into Vietnamese. However, Dat made it clear in our conversation that his skills go beyond computers.

“I think I’m strong in communication. When I’m talking with people, they often sympathize with me,” Dat said. “I don’t know why—I think maybe the way I talk with them is friendly and makes them feel comfortable.” Starting this week, Dat will be joining me and other AEPD staff in visiting families devastated by Agent Orange, where his empathy and personal skills will undoubtedly be in evidence.

Part of the goal of AP’s local associate program is for local associates to continue the work of peace fellows outside of the summer months. Dat and I will be working together during the two months we’re both here to develop a work plan for future associates, so that both of our jobs can be taken over by the next associate and AP can establish more of a presence at AEPD throughout the year. For his part, Dat hopes to grow professionally from this experience, improve his English during our work together, and burnish his CV for the future job market.

Dat says that with the IT sector booming in Vietnam, many companies will be “hunting” for members of his class when he graduates, offering lucrative jobs. But he’s become interested in a different path during his time in university, and now hopes to go to an Australian university after graduation to study for a master’s in business information. His long-term goal, he says, is to “build my future in Australia, and then when my parents retire I will take them to Australia.”

For now, though, Dat is excited to be making a difference in the lives of victims of Agent Orange.

“For Agent Orange, I didn’t do anything in the past and I feel a little bit guilty,” he says.