A Buffalo, A Calf, and an Opportunity 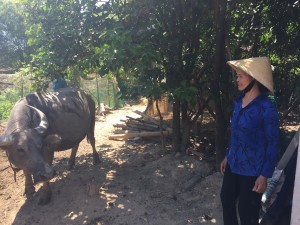 Mrs. Duong Thi An with her new buffalo.

I first visited Mrs. Duong Thi An and her children, Huong and Hoa, around six weeks ago as I prepared to launch a fundraising campaign for them. I was impressed at the time by her obvious strength and resilience, and her willingness to take chances on her children’s behalf even with a “1% chance of success”. But I knew there was no way I was actually going to complete the campaign during my time here. My goal when I arrived in Vietnam was to raise $500 for Mrs. An’s family, and leave AEPD in a strong position to raise the remaining $1000 we estimated would be needed to buy her a mature buffalo and a buffalo calf (with the goal of developing a source of income that this family desperately needed). Personally, I thought even that was a bit ambitious, and $300 or so would seem more likely.

Of course, I was completely wrong. Thanks to an outpouring of support from a total of 30 donors, we were able to not only blow past my initial goal but actually raise the entire sum for Mrs. An in an astounding two weeks. My own efforts to get the word out exceeded my expectations, with people ranging from family and close friends to acquaintances and indirect contacts feeling compelled to help Mrs. An—but plenty of support also came from complete strangers, who heard about the campaign through the Advocacy Project or our fundraising platform, GlobalGiving, and decided to help without knowing me or AEPD at all. I can’t express how overwhelmed and grateful I am, and after returning to Mrs. An earlier this week, and seeing the results of everyone’s efforts, I can safely say that she shares these feelings. 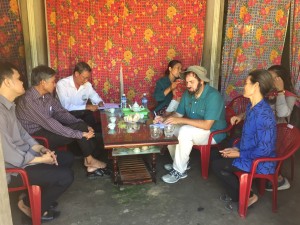 Our group talking with Mrs. An (at right) and her son Huong (at left).

After greeting our group, Mrs. An tells us that the seller of the buffalo and calf, who also lives in her village, will be walking the animals over soon, so we sit down to talk while we waited. We are joined by the president of AEPD’s local self-help club, himself a disabled war veteran—he and Mr. Thuan, the AEPD outreach worker serving this district, will be checking in on this family and providing whatever support they can. I start by asking Mrs. An about her plans for using the buffalo and calf; she speaks for a while before any of her response is translated.

Mrs. An begins by profusely thanking the Advocacy Project, AEPD, and everyone who gave, before going on to detail her plans. Her son Hai, a healthy adult who lives nearby with his own family, will be primarily responsible for raising the buffalo and calf, with the help of his brother Huong, who is disabled and lives with Mrs. An. Hai also has his own male buffalo—since Mrs. An’s new buffalo is female this will make it easy to breed a new calf, hopefully soon. Mrs. An then hopes to sell the older calf and raise the new one—the profits will help her buy food for her family, save money in case of a medical emergency, and fund the surgery Huong needs to halt the decline of his eyesight. She’ll also use the mature buffalo to work her fields, and use its dung as fertilizer to feed her crops. The animals will be fed from Hai’s and Mrs. An’s fields.

Mrs. An also gives us another bit of unexpected good news—since our last visit Huong has opened up a small business as a masseur, which he’d previously described to us as a long-term goal. Huong explains that a local businessman (who is also a big donor to AEPD) helped him by securing a location near the village market, where he’ll be able to operate rent-free until he starts making a profit. There’s not much traffic yet, only a couple of customers a day on average, so he’s only making enough for basic life costs—but he hopes that within a year his massage parlor can become a viable business whose profits can be used for medical expenses. (Massage parlors with sight-impaired masseurs are a frequent sight in Vietnam.)

I ask whether Huong’s condition had changed since our last visit, and he shakes his head. Huong says he’s hoping to eventually raise the 50 to 70 million dong ($2200 to $3000) needed for the surgery from the added income generated by the buffalo and calf, as well as his massage parlor and perhaps other assistance or loans, but it’s unclear whether the problem with his sight can be reversed at this point—the surgery is his only chance. If all goes well, Mrs. An adds, 2 calves will be born in the next 3 years; each buffalo calf can sell for around 10 million dong ($440), and each full-grown animal can sell for around 23 million dong ($1010). In an emergency, or if Huong or his sister Hoa (who has Down syndrome) worsens, Mrs. An says she could sell the mature buffalo at once and just raise the calf, but this would be much less profitable long-term so she’s hoping to stick with her own plan. 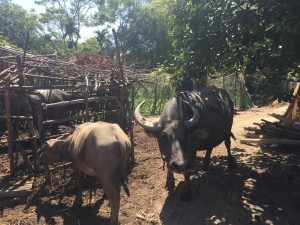 At this point we are told that the seller of the animals, Mrs. Phuc, arrived during our conversation, and we go out to see the buffalo and calf. They’re mingling with Hai’s buffalo in Mrs. An’s small barn, located behind her house, and seem healthy and strong to me. After taking some photos, I ask, through my translator Ngoc, whether it’s customary in Vietnam to name farm animals. Ngoc’s reaction suggests that it’s not, but she still asks Mrs. An the question. Mrs. An thinks for a moment, then responds that the mature buffalo would be named “Tinh” and the calf would be named “Nghia,” a combination of words that Ngoc isn’t sure how to translate. While revisiting my notes in writing this post, I decided to do it myself—it turns out tình nghĩa means “gratitude” in Vietnamese. (I’m not changing the sequence of events for dramatic effect, by the way—this is really how it happened.) 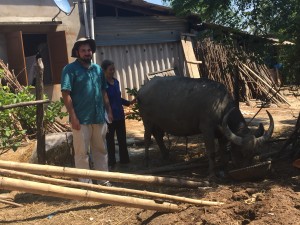 We go back inside and Mr. Thuan, the AEPD outreach worker, reads the terms of Mrs. An’s contract with AEPD and the contract of sale with Mrs. Phuc, both of which are signed. Mr. Thuan hands a stack of 500,000-dong bills, totaling 27 million dong ($1188), to Mrs. Phuc, who examines them and pronounces herself satisfied. The deal is done—our work has paid off. Perhaps because this is my last week at AEPD the moment feels like a culmination of everything I’ve done here.

Before we go I tell Mrs. An how happy everyone at the Advocacy Project is for her family, and that I’ll look forward to hearing good news about her family from AEPD. I explain that since I know many of the donors to her campaign personally I will be reaching out to them to describe my visit, and ask her whether there’s anything in particular she’d like me to say to them on her behalf. Mrs. An’s voice is generally fairly quiet, but it noticeably wavers and becomes more emotional during her response, and I see tears in her eyes. 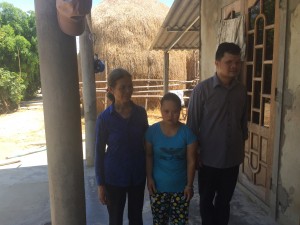 Mrs. An with her daughter Hoa and son Huong.

Mrs. An, through Ngoc, tells me that she wants to thank all of the donors who helped make this possible, as well as the Advocacy Project for launching the campaign. With their support, she says, her family can raise the income needed to take care of Huong and Hoa’s basic needs, and will eventually be able to afford medical treatment that could make a big difference for Huong. The willingness of strangers to help her family means a lot to her, she says with as much emotion as anyone I’ve met here.

Mrs. An and her children thank each of us again as we say our farewells, and I reflect on what our donors have accomplished for this family, all of whom seem more confident and happier than I remember from my last visit. My work here can’t possibly “solve” the problem of Agent Orange—I can’t even solve all the challenges faced by this one family. But Mrs. An and her children wouldn’t have gotten this opportunity without our campaign, and I’m grateful to have played a part in that.