A Path Forward for Duong Thi An 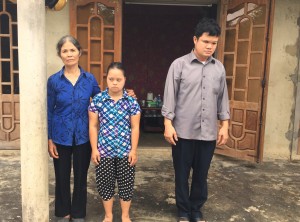 From left to right: Duong Thi An, her daughter Hoa, and her son Huong.

Duong Thi An lives with two of her children in a village in Le Thuy district, located near the Pacific coast around an hour’s drive south of Dong Hoi. A rural area, the district is perhaps best known for producing Vo Nguyen Giap, a celebrated North Vietnamese general during the country’s wars with France and the United States. Mrs. An’s modest wooden house lies on a dirt road, with a pond visible on the other side. The occasional motorcycle or bicycle passes by as we speak with Mrs. An, but overall the neighborhood is quiet; once again I’m joined by Mr. Thuan the outreach worker, my translator Ngoc and our AP associate Dat for this visit.

As we sit down with Mrs. An in her living room, we’re joined by her son Huong and her daughter Hoa, adults who still require their mother’s care due to the effects of Agent Orange. Mrs. An herself is in her sixties and seems melancholy and withdrawn—she speaks in a quiet voice I might struggle to follow even if I understood Vietnamese. It takes her a few minutes to respond to my first question about her first experience with Agent Orange, and as I wait for the translation I look around the living room; it’s dark and fairly spartan, with a prominently displayed certificate honoring the military service of Mrs. An’s late husband, Le Quoc Hung. 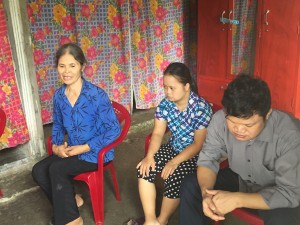 From left: Mrs. Duong Thi An, Hoa, and Huong in their living room.

Mrs. An tells me that her first exposure to Agent Orange occurred when her son Hoi, the first of three children, was born in 1976. Hoi’s father, Mrs. An’s husband Le Quoc Hung, had served in the North Vietnamese military during the American War and was exposed to Agent Orange in the late 1960s, while stationed in the forest around what was then the border between North and South Vietnam. As a result, Hoi was born with limited mental capacity, but he grew up to be functional enough to marry and start his own family; he now lives nearby, but a couple of his children scamper around the house during our talk. At one point, one of Hoi’s daughters brings another kid to gawk at the strange visitors—they peek at us over the fence as we continue our conversation.

Mrs. An and Mr. Hung would have two more children before Mr. Hung’s death in 1981. The first, Huong (now 38), was born normal, but at age 9 his eyesight suddenly began to weaken, forcing doctors to remove his right eye. The youngest child and only daughter, Hoa (now 35) was born with Down syndrome, and has never been able to go to school or grow into a functional adult. Mrs. An says that Hoa can only do simple household chores, but Huong was able to get a job as a masseur at a nearby massage parlor. However, his eyesight has been getting progressively worse since 2012 when he developed a detached retina in his remaining eye, forcing him to stop working. 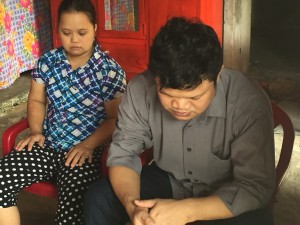 Huong tells me that he can now only see “big things”; his left eye functions at around 10% of normal sight. He’s had four operations in the last five years to prevent from going blind, which has been a major expense for the family, but the retina becomes more easily broken after each reattachment, and Huong’s has since become detached again. He and his mother are hopeful that another operation could stabilize his vision, but the cost is more than they can afford. Mrs. An has a small farm where she raises rice, sweet potatoes and other vegetables, and she also raises, pigs, chickens, ducks and geese, but she tells me that the family has still struggled to make ends meet. There have been periods where Mrs. An’s family hasn’t had enough to eat, which is particularly damaging for Hoa; without nourishment she can suffer serious fevers.

The solution we’ve developed with Mrs. An’s help is to buy her family a buffalo, which Hoi and Huong will care for together. Mrs. An hopes to breed the buffalo and produce a calf that she can raise and sell—she can also use the buffalo for farm work, to generate fertilizer, and to rent out to other farmers in her area. Mrs. An seems dispirited for much of our visit, but she is noticeably optimistic about the possibility of improving her family’s status with a buffalo. She’s owned a buffalo in the past, she says, but had to sell it to pay for treatment for Huong; breeding her buffalo will allow her to build a more sustainable income, which she will use to buy much-needed food and medicine for Huong and Hoa.

Mrs. An’s longer-term goal, she says, is a surgical procedure for Huong that could stop the decline of his vision. But this would involve a trip to the eye hospital in Hanoi (over 300 miles away) and a long-term stay so that doctors can monitor him; it would end up costing 50 to 70 million Vietnamese dong (around $2200 to $3000), which even with the buffalo is too much for them to afford. Mrs. An says that selling the calf, and possibly breeding the buffalo again, would help her eventually save enough money to afford the surgery for Huong. I ask Huong if there’s a deadline for the surgery, and he responds that he isn’t sure—but sooner would surely be better, while he still has eyesight left to preserve.

Dat will eventually talk with me about some of the nuances of this part of the conversation that don’t get translated. As he will report, Mrs. An says that she’s offered to give Huong one of her own eyes in order to repair his sight, only to be told by doctors that this wasn’t possible. She then quotes a proverb that Dat has difficulty translating, but summarizes by saying that when you have a goal and there’s a 99% chance of failure, that still leaves a 1% chance of success. In other words, as long as there’s any chance at all of improving her children’s lives, she’ll sacrifice anything for them.

When Huong’s eyes began to fail at age 9, Mrs. An recalls, she had to carry her son into the hospital and up a long flight of stairs for his operation. Thinking about this now, Mrs. An despairs. She wondered then, and wonders now, why none of her children were spared from the effects of the poison.

I ask about Hoa and whether there’s anything that can be done for her—Mrs. An tells me that there is no cure for her condition, but that medicine can at least make her life more bearable, and a buffalo would bring in the income necessary to buy the medicine Hoa needs. At this point, Huong adds that his ultimate dream, assuming he can retain some of his sight, is to open his own massage parlor and use his training to support himself and his family. This is well out of reach for them even with the buffalo, though, and medicine for Hoa and surgery for Huong is a much more immediate priority. Ngoc adds that this may eventually be something AEPD could help with, however. 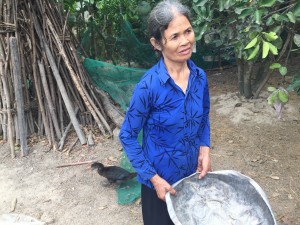 Mrs. An feeding her birds.

At this point we all go outside to look at the animals Mrs. An has now. Next to the house is a wooden barn, which will be the home of the buffalo once it’s purchased, and the backyard includes a pond where dozens of ducks and geese live. It’s feeding time, and Mrs. An gently calls the birds to her. As she scatters food for them to eat, she tells me that her larger fear is that nobody will be able to take care of her children when she’s too old to provide for them, and that she hopes someone can help her find a place for them after she dies. I can only tell her we’ll do our best, and that I hope we can raise the money for her new buffalo soon.