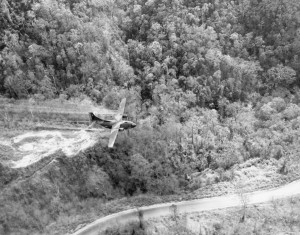 A US plane spraying Agent Orange in Vietnam during the Vietnam War. Courtesy National Museum of the US Air Force.

In working with disabled people here in Vietnam, I’ve often had to stop and remind myself that the disabilities and diseases from which most of them suffer aren’t natural. Mai Thi Loi’s children and Duong Thi An’s children weren’t just born disabled for no reason—their disabilities are a direct consequence of US policy in Vietnam, and the military’s decision to contaminate the land with Agent Orange. (And yes, I’m aware that there’s some controversy over the extent of Agent Orange’s health effects—I hope to address that in a later post so I won’t get into it here.)

The reason I’ve had to remind myself about this is that the Vietnam/American War almost never comes up in conversation. Back in my very first post I predicted that the war would be central to my experience here, but that hasn’t been as true as I’d assumed. Most people I talk with are interested in my life in America and American culture, but none of them bring up American politics, Vietnamese-American relations, or the war. Perhaps that’s just politeness, but I suspect it’s indicative of something deeper. Most Vietnamese don’t remember the war, and even those who do have plenty of images or impressions of the US that aren’t focused on the war. (By contrast, I’d imagine the war is the first thing, maybe the only thing, most Americans think of if the subject of Vietnam comes up.) Even my conversations with individual victims of Agent Orange haven’t addressed the reasons why they were exposed in the first place, and none of them have seemed concerned or angered by the fact that I’m American.

In other words, during the course of my work in Vietnam, the issue of guilt or responsibility for the use of Agent Orange hasn’t really been an issue. But should it be?

Legally, at least so far, the answer seems to be no. Chemical weapons are illegal under international law, but Agent Orange wasn’t actually meant as a “weapon”, at least not officially—it was an herbicide used to destroy forests and crops at the South Vietnamese government’s request, and its impact on humans was only understood later. (Whether, and when, the US government knew it was poisoning civilians is hotly debated.) A treaty signed after the Vietnam War (and ratified by the US) outlawed this kind of “war against the environment”—but in the 1960s, the US government says, there was no law against using herbicides in war. This argument has prevented Vietnamese victims or the Vietnamese government from claiming reparations in court.

In the early 2000s a prominent victims’ rights group called the Vietnam Association for Victims of Agent Orange/Dioxin (VAVA), which works with many of the same families as AEPD, filed suit in a federal district court against the US companies that manufactured Agent Orange. VAVA claimed that the use of Agent Orange violated international law and that its manufacturers owed compensation to the victims. The court’s 2005 ruling, later upheld by an appeals court, found that Agent Orange “was used to protect United States troops against ambush and not as a weapon of war against human populations” and that its use didn’t violate international law at the time. (VAVA has been unable to sue the US government itself because of a legal doctrine called “sovereign immunity,” which prevents lawsuits against the federal government without the government’s consent.) 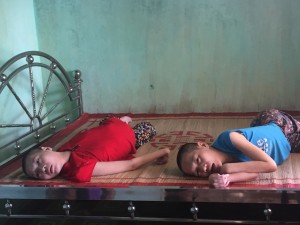 Two paralyzed victims of Agent Orange, Phuong and No.

I don’t have enough legal knowledge to properly defend or rebut this line of argument. Based on what I’ve read, it seems to make sense based on the letter of the law. But from a moral standpoint it also feels like a dodge. The fact remains that the US manufactured and used a poison that has destroyed or horribly warped the lives of thousands of Vietnamese and Americans—many of them civilians, many of them children—and that’s not something we can simply turn our backs on. Having met some of the victims, I can’t imagine looking any of them in the eye and telling them that their disabilities are simply an accident, that they don’t have a right to some form of justice. My own belief is that Americans who love their country, as I do, should have the courage to confront the true consequences of our policy in Vietnam—not so much out of a sense of guilt as a sense of responsibility to do what we can, even at this late date, to support victims and right wrongs to the extent that we can.

American victims of Agent Orange have had some success in the long, slow battle for the recognition and support they deserve (see this excellent series for details on how that battle is being fought today). Vietnamese victims receive compensation from the Vietnamese government (usually around $17 a month in 2010)—but most of the families I’ve spoken to, while acknowledging this support, add that there’s not much assistance to go around. Many still can’t afford basic expenses, let alone proper medical care. International NGOs and foundations, including American ones, also provide humanitarian assistance to Agent Orange victims, but so far, the US government’s contribution has been minimal.

The good news is that the last decade has seen some positive steps, especially as Vietnam and the US have grown closer diplomatically. Since 2006, the US has spent tens of millions of dollars through USAID on environmental decontamination efforts around former US military bases in Vietnam. A fraction of these funds go to support public health and assistance programs for persons with disabilities. Yet victims’ advocates say that the money contributed so far is a very small percentage of what is needed, both to compensate victims and to remove the last traces of contamination from Vietnamese soil. Perhaps more significantly, all US disability assistance programs apply to any disability, regardless of cause—the government hasn’t formally acknowledged Vietnamese victims of Agent Orange as a group.

A few politicians have been supportive of Vietnamese victims, and a congressional committee actually invited one to testify for the first time in a 2010 hearing on the subject. More recently, Representative Barbara Lee of California introduced a bill, the Victims of Agent Orange Relief Act of 2017, which would recognize the rights of Agent Orange victims in Vietnam and designate funds specifically to support them. But I know enough about politics to realize that the chances of such a bill passing anytime soon are pretty much nil (Lee has introduced the same bill before to no avail), and that US assistance is if anything likely to decrease as the foreign aid budget is cut. Right now it’s hard enough for Americans to mobilize our government to work for us, and Vietnamese victims of Agent Orange—poor and marginalized citizens of a faraway land—are without votes, money, or other means of influencing the makers of US foreign policy.

The only hope for justice, and for true reconciliation between the US and Vietnam, is for enough Americans to support it that our government is compelled to act. I’m not optimistic about this, but if I can accomplish one thing while I’m here, I hope it’s to share the stories of Vietnamese victims of Agent Orange and draw people’s attention to their plight and to this issue more generally. We haven’t really reckoned with Agent Orange as a society, but it’s not too late.