The Good Ship Mayadip Revives An Island Community In Bangladesh

Fishing is the main source of food and employment on Mayadip

The Mayadip first set sail in September 2021 with a crew of two and a weighty mission – to improve the lives of 250 largely destitute families who live on an island in the Meghna, the largest river in Bangladesh.

Six months later, the mission is well under way. The Mayadip (Bengali for “Affection”) has caught over 9 tons of fish, provided temporary employment to 193 young crew members, paid for a community feeding kitchen and given opportunity to boat-makers, cooks, teachers and volunteers across the island (also named Mayadip). 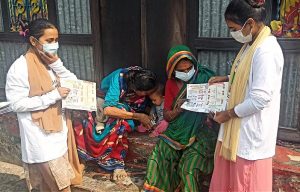 So far, the project has reached 524 islanders – almost half of the entire population. It began covering costs after just 2 months.

“The Mayadip has done so well,” said Shahed Kayes, a well-known poet and advocate who launched the project in Bangladesh. “We never expected this when we began the journey!”

The Mayadip is the centerpiece of an experiment by the Subornogram Foundation, which was founded by Mr Kayes, and The Advocacy Project (AP). Its goal is to revive the fortunes of the island through a package of education, food, employment, health care and women’s culture. The latest initiative is a vaccination campaign (photo).

The River Gypsies are part of a larger group known as River Folk and among the most marginalized minorities in Bangladesh. They are also desperately poor. Mayadip Island is dependent on fishing and does not support any agriculture. As a result, said Mr Kayes, the poorest families struggle to earn $1.50 a day and are always short of food.

Mr Kayes added that River Folk will be among the first casualties from floods and sea level rise in Bangladesh triggered by climate change.

The pandemic has added to Mayadip’s woes and pushed many families close to starvation. With COVID-19 infections in Bangladesh near the peak of last August, Mr Kayes is worried about the virus reaching the island, which does not have a health center. 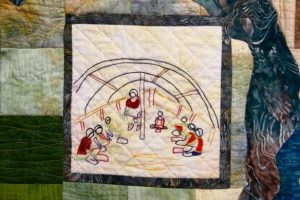 Mr Kayes has been committed to the River Gypsies since he first visited Mayadip in 2006, before the island even had a name.

He proposed the name of Mayadip and celebrated with a poem after the government agreed: “Red scratch of fire in sleepless eyes on the shores of this rushing Meghna River….. ”

Subornogram’s first investment in the River Gypsies addressed education. With help from AP, Mr Kayes opened four schools, two of which were on boats. Several gypsy women artists depicted the schools through embroidery in 2013 (photo).

But Mr Kayes’s campaign for social justice infuriated local businessmen and he was almost killed in a knife attack. After he fled to Korea, his schools stayed open but kept a low profile.

Mr Kayes returned in 2019 when local politics changed, and re-energized his team. AP put up $1,000 for a fishing boat last July and the craft was completed by two expert ship-makers, Binod and Sujan, within a month.

The Mayadip employs two crewmen who keep half what they earn from fishing. The remainder pays for a community feeding kitchen, which offers a hot meal every day for a week to 8 needy individuals. (photo)

After showing what can be done with education, food and employment, Subornogram has now turned to health. Using another small grant from AP, Mr Kayes’s team has begun to register islanders for vaccination and accompany them to a health center on the mainland. 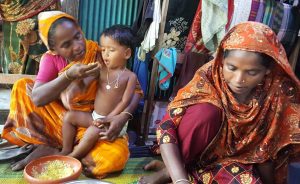 The Mayadip project continues to spin off new ideas. Mr Kayes has started posting recipes by Saleha and Rubpan, who cook for the feeding kitchen, to be tested out in the US. AP has also commissioned embroidered stories of COVID from twenty Subornogram volunteers for a global COVID story-telling project. (photo)

Subornogram’s bottom-up approach offers a clear model to aid agencies that want to invest in local solutions and build the resiliency of threatened communities. The boat project comes entirely from the River Folk and draws on their skills, particularly fishing.

In Mr Kayes and his team, the gypsies have also found a staunch ally with an international network. AP’s current contribution is to provide friendship, start-up funds ($2,496 in 2021), and help with monitoring through a weekly “output tracker.” A student Peace Fellow will provide more remote support this summer.

Mr Kayes’s main goal for 2022 is to reach more families on the island. Working with AP he plans to post a fundraiser on GlobalGiving in April and purchase at least one new boat. Subornogram and AP are also exploring new ways to strengthen food security on the island.

* Read this for background on the River Gypsies

* Want to help? Try Rupban’s fish curry and give us feedback.