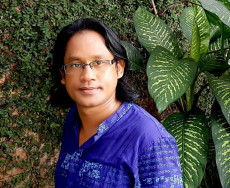 Shahed Kayes was born in Dhaka, Bangladesh on 16 September 1970. He was brought up in the ancient capital of Bangladesh Sonargaon, and educated in Sonargaon, Dhaka, Chennai (South India), and Gwangju (South Korea). Kayes started writing poetry in the early nineties. He has published six volumes of poetry in Bengali and edited an anthology of Bengali love poems. He also edited the book “Who Really They Are?” (Human Rights situation in 12 Asian Countries) published in English by 'May 18 Memorial Foundation', in Gwangju, South Korea. He is also editor of the book “Remembering Scientist Maqsudul Alam” (A memoir). Kayes’s poetry is both the instrument and the outcome of his attempt to come to terms with himself. One finds in the poems the imprint of a keen mind trying to explore and communicate on a personal level feeling of loss and deprivation. Kayes is conscious in his poetry of the contradictions in society and the human struggle. Kayes is also involved with social work and human rights activities in Bangladesh. With his passion for social change, experience in cultural diversity, background in creative writing, and Human Rights activism he is dedicated to People's sovereignty, Multiculturalism, Rule of law, Democracy, and Human Rights. Several times his life was under threat, for working for the human rights of his countrymen.

The shadowy game of life and death
Pulls me very close;
When the dawn light childhood of the day
Darkness wraps its solitary wings
The illusion is cut down

Walk along the middle of the two sighs
With a narrow path between dreams and nightmares
House of golden clouds, the world of water
And the children wake up in the morning one by one.

How I came to know about this island?

I visited this island for the first time in September 2006. I went to the neighboring island named Nunertek with my friends to attend a program. After the event, I just started walking around and came to the end of that island. Then I saw another small island and crossed the river. It was really very beautiful and rich with natural beauty! I was surprised at the first sight! It was an awesome island surrounded by the Meghna river!

I came to learn that there was no name for the island. The next week I enquired at our Assistant Commissioner (AC) Land office, a Land related Govt. office in the Mainland Sonargaon. They confirmed to me that the island was not recorded.

The day I was visiting the island, I talked with the Islanders. There was no electricity, no schools, no hospitals. The islanders are full-time fishermen and part-time farmers. They fish in the Meghna river. Almost all of them are illiterate, they can neither read nor write. People are very poor. They just live hands to mouth. They do not have their own Boats and nets for fishing in the river. They work as day laborers, and work for other rich fishermen from the neighboring island ‘Nunertek’. At the end of the day, they just earn less than 2 dollars a day.

When I came back to Mainland Sonargaon in the evening the same day, I could not stop thinking about the beauty of the island and the sufferings of the people there. At night I wrote a poem based on my experience and feelings for the new island. I named the poem “Mayadip”. The meaning of the title of the poem is the land of affection. This poem was published in a national newspaper’s weekly literary journal in October 2006.

We started school in January 2007 on the island. I suggested a name for the school. “Mayadip Jeleshishu Pathshala.” (Mayadip School for the Fisherfolk children community) after the name of my poem ‘Mayadip’. Everybody liked the name and the school was established. The islanders helped us build the school. They worked physically to build the school and we used the local materials to build this school.

After 2 years one of my journalist and writer friends named Saymon Zakaria visited my home at Sonargaon in 2009, and I took him to Mayadip. He was very excited about the island after hearing things from me, then he decided to interview the islanders and write a feature on Mayadip.

The feature was published in the most popular Bengali national newspaper in Bangladesh named, “Prothom Alo”. Prothom Alo is the most widely read newspaper in my country. The title of the writing was “Mayadip-er Pathshala” (The School of Mayadip). It was published on 8 August 2009 in the supplementary journal of the newspaper named “Chhutir Dine”. It was the cover story of that issue, with 5 pages writing. After the feature was published Mayadip became very popular among the people in Sonargaon and outside of Sonargaon. and many people started visiting Mayadip. Not only the tourists, but some Govt. people also started coming to the Island.

An island is born from a poem. Then a non-privileged children’s school was born after the island’s name, popularized by the media. Then, after a couple of years, a movement started called “Save Mayadip Movement” in 2010 against the illegal sand miners involved with the real estate company to save 1200 peoples’ lives, livelihood, and environment.