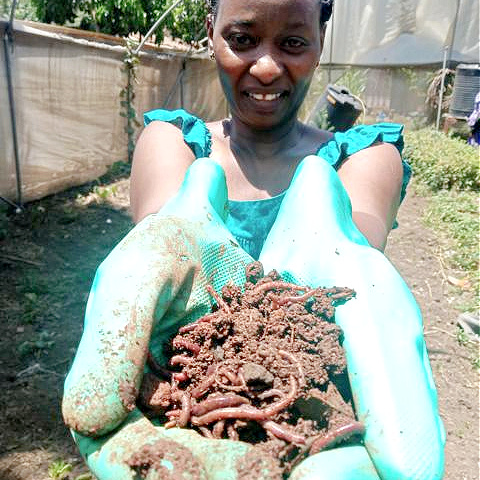 Red Wrigglers as Agents of Change

Stella Makena (photo) felt queasy when she purchased her first batch of Red Wriggler worms for a vermiculture start-up in the informal settlement of Kibera, Nairobi.

Six months later her views have not changed much. “I still hate having worms in my house,” she explained during a recent Zoom with The Advocacy Project (AP). “Seeing them crawling across my vegetables is the yuckiest thing I have ever seen.”

But Stella’s distaste is also mixed with admiration. Her worms have munched their way through 30 kilos of kitchen waste since September and revolutionized the way she manages food and garbage in her corner of the sprawling Kibera settlement. 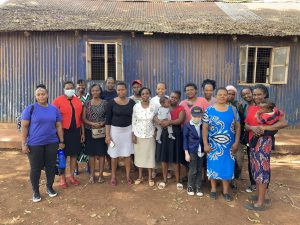 Together, Stella and nine friends have composted over half a ton of kitchen waste that would otherwise have been buried in a landfill; grown and eaten organic vegetables; reduced food bills; and secured government recognition as a women’s association.

Topping it off, they have also produced leachate, an evil-smelling but highly effective fertilizer secreted by the worms, which is starting to sell.

Stella likes the fact that her wrigglers have become agents of change in what is often described as Africa’s largest slum. “They have taught us to value waste! I can actually eat organic vegetables that came from garbage. This is really life-changing.”

The composting project dates from November 2019, when Stella organized women from Kibera to produce embroidery for an advocacy quilt at the UN Summit on Women and Girls (ICPD25). The women decided to continue stitching together and helped to make wildlife quilts for the Sister Artists 2 project that were exhibited and auctioned on March 8.

But stitching goes only so far in a community where food is expensive, flooding is common, jobs are hard to find and garbage is everywhere. Many in Stella’s group are single mothers.

In the spring of 2021 Stella sought funding from AP for a vermiculture start-up. Using a YouTube video, she designed a composting bin out of buckets and co-opted several members of her stitching group. She was working at the Tandaza Trust, a church organization, at the time and the Trust also began composting. 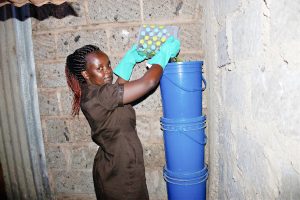 The early months were full of trial and error. The women had to find space for their composting bins in crowded houses, although smell became less of a problem once the worms got to work. They had to adjust to the idea that egg-shells and banana peel could be an investment. With agricultural land at a premium, several set up kitchen gardens on their roofs. One garden was washed away twice by flash floods.

But they persevered and awarded prizes to their best composters. One prize went to Winnie for figuring out the right ratio of leachate to water after her lettuces turned yellow.

Under their agreement with AP, the women began keeping records in September and composted a combined 1,189 pounds by December. Stella now grows 40% of her vegetables and has reduced her weekly food bills (which cost the equivalent of $21) by a fifth.

Between them, the ten women have also produced about 150 liters of leachate, which they have branded as Lishe-Grow. (Lishe is the Swahili for “nutrition.”) A laboratory has analyzed the liquid and given it an A rating. Delaney Rogers at AP designed a label and Stella purchased 5-liter bottles which are currently stacked up in her son’s bedroom waiting to be filled.

Through it all, Stella’s relationship with her worms has remained ambivalent. She still shrinks from handling the wrigglers and weeks passed before she agreed to pose with them in the photo above. Even then she kept the animals at arm’s length 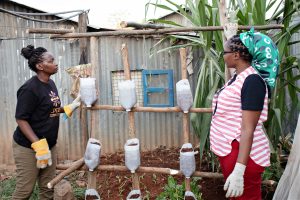 Growing food in the crowded settlement of Kibera

But Stella is also reminded of their contribution in changing attitudes as well as behavior. Kibera is notorious for its poverty, which is usually measured by the average daily income (just over $1). After three stitching projects and a successful composting start-up, Stella’s team views this assessment of their worth as deeply demeaning.

“Poverty is about individual choice,” she said. “Our women can now work from their homes and control their lives, instead of being defined by the need to earn a daily wage.”

As their composting inches forward so does their association, Shield of Faith, which has been registered by the government. The women have also invited several mothers of children with albinism to join their composting project. They hope to offer Lishe-Grow to a program of the Kenyan government that aims to plant a million kitchen gardens throughout the country.

AP will continue to invest in the start-up in 2022 and seek new partners for Shield of Faith. The group recently received a visit from Peter Ash, a vermiculture expert from California, at AP’s suggestion. AP is also hopeful that Stella’s worms can even inspire composting projects at High Schools, churches and community centers in the US.