Girls in Zimbabwe Beat the Odds and Build a Soap Business 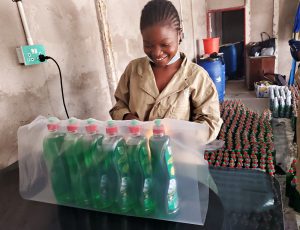 Green and gooey, Clean Girl soap seems an unlikely agent of change. Yet it has given 68 determined girls in Zimbabwe a way to defy early marriage, the pandemic, inflation and now food shortages caused by war in Ukraine.

In the process, the girls have shown how hard work and innovation can boost incomes in inner-city neighborhoods of Africa, with help from American students not much older than themselves. 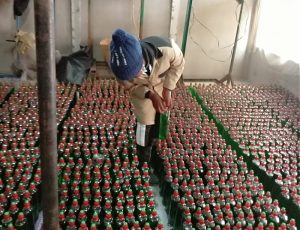 Clean Girl soap at the new WAP factory in Harare

It started in 2018 when Women Advocacy Project, AP’s partner in Zimbabwe, took a stand against child marriage.

Helped by Alex Kotowski, an AP Peace Fellow at Columbia University, Constance Mugari the founder of WAP came up with the idea of asking girls to serve as “ambassadors” and organize clubs that would rally around girls at risk.

McLane Harrington a Peace Fellow at the Fletcher School, Tufts Unversity, followed up in 2019 by helping WAP to launch a soap-making start-up. By the end of the year the girls had developed their own brand of soap, which they named Clean Girl, and sold over 3,000 bottles.

The arrival of COVID-19 in March 2020 put soap-making on hold. Undeterred, the girls distributed the unsold soap to struggling families, which won them friends and future customers. They also turned to stitching to describe the savage impact of COVID lock-downs.

As the pandemic began to recede, the girls resumed soap-making and WAP produced this sparkling video which helped to secure a 2-year commitment of $107,000 from four donors: Together Women Rise, Action for World Solidarity, Rockflower and AP. 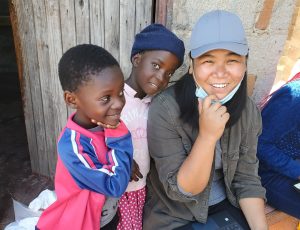 Finally freed from lock-downs and assisted by Dawa Sherpa, another Peace Fellow with a deep commitment to community development (photo), the young soap stars have taken their business to the next level.

They still worry about early marriage, but none of them has married since the program began and they now see a much larger threat from poverty. This has worsened with the war in Ukraine, which has led to food shortages, and with soaring inflation. Some families earn as little as $2 a day.

Soap remains their best hope for supplementing the family income and the girls are closing in on their 2022 target of selling 16,000 bottles, helped by savvy investments and cost-cutting.

A grant from Rockflower has paid for a new factory where soap can be produced without interruption. Six new solar panels allow WAP to avoid crippling power outages. Peace Fellow Dawa secured a new vehicle from the Swiss embassy. WAP has improved labelling and packaging.

All this saves time and money.

The production of soap has been assigned to four veterans of the program – Trish, Dorcas, Lynes and Rosemary. But all 68 girls sell soap and share the financial rewards. Over the past three years they have built up a loyal customer base in the small stores known as “tuck shops” and in supermarkets. This has allowed WAP to raise the price of Clean Girl soap by 50%.

The soap-sellers no longer work in teams as shown in our video. Instead, each girl is given 11 cases – 66 bottles of soap – to sell in her neighborhood. She keeps 70% of what she sells and the remainder goes to WAP to be re-invested. The girls will share over $12,000 this year – a major boost to the family income. WAP expects to have over $10,000 in the bank by December. 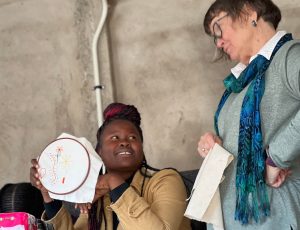 Trish Makanhiwa, a WAP girl ambassador, tests out an embroidery design with Bobbi Fitzsimmons from AP during training in Harare

Their success with soap has given the girls a taste for innovation, starting with the environment.

Clean Girl uses a lot of plastic but recycling barely exists in Zimbabwe and the bottles are too fragile to be re-used. The caps, however, are sturdy and account for 40% of the cost of bottles. WAP has promised the girls an additional dollar for every 20 used caps and retrieved 500 caps after just two months.

At a time when food is short, WAP may also suggest that the families follow the example of Stella Makena in Nairobi and consider composting food waste.

Education is also on the agenda. Fifty girls have yet to complete secondary school and AP and WAP will launch a new fund in January to offer scholarships. The first donation of $682 will come from students at the Wakefield High School near Washington DC who sold their own Clean Girl soap in solidarity with the WAP girls. 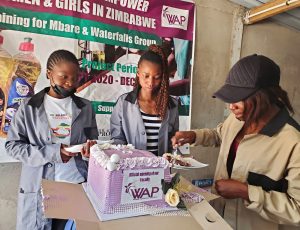 How sweet it is: celebrating the opening of the New WAP factory in style

It is hard to remain immune to the charm of the young WAP soap artists. Their enthusiasm was captured in this blog by Peace Fellow Dawa, who helped to organize a party to inaugurate the new factory and contributed an impressive cake. The event turned into a succession of hugs and gifts.

Looking ahead, however, the business will need more than charm to maintain momentum.

Constance Mugari estimates that WAP could sell up to 50,000 bottles next year, which could bring in another $25,000 for the business. But this would not be enough to cover the increased cost of material or make up for the loss of a major grant, which ends in December.

More innovation – and more hard work – lie ahead for the young soap stars of Harare.

This article was adapted from a report to GlobalGiving where our appeals have raised $6,321 for WAP’s soap. Click here to donate.