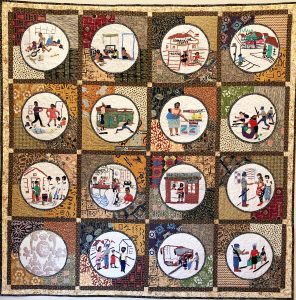 Early in the summer of 2020, when the impact of the COVID-19 pandemic was becoming clear, ten girls from the Women Advocacy Project (WAP) in Zimbabwe decided to describe their experience with the pandemic through embroidery. 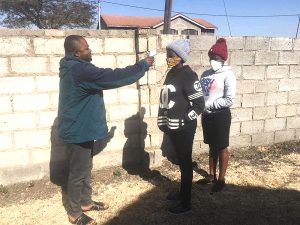 Temperature check: Arriving at the training.

The virus was surging in Europe and the US at the time. It was not yet clear how Africa would be affected but everyone feared the worst. As we reported, the crowded communities of Harare seemed particularly vulnerable. Zimbabwe had almost no testing facilities and just one Intensive Care Unit (ICU). If the virus was allowed to enter communities like Chitungwiza and Epworth, there was a real fear that it could spread like wildfire.

WAP was already playing a leading role in supporting vulnerable families in Harare. Starting in 2018, WAP trained two teams of girls to make and sell soap as a way to reduce the threat from early marriage, and help cover the cost of the girls’ education. The project has generated over $6,000 to this point, and created a tightly-knit and highly effective team.

In 2019, eleven WAP girls produced blocks for the Zimbabwe Child Marriage Quilt, describing their experience of early marriage. Their blocks were assembled into an advocacy quilt by Allison Wilbur, from Rhode Island. Constance Mugari, the founder of WAP, took the quilt to Nairobi in November for the ICPD 25 summit on Women and Girls and used the quilt to promote WAP’s work with delegates. 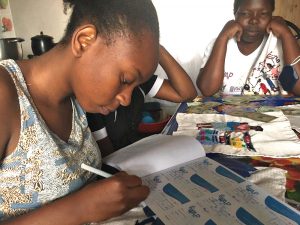 We were delighted, but not surprised, when the girls decided to use their stitching skills to describe the pandemic in May 2020. We asked WAP to come up with a budget and drew on our own COVID-19 community fund to cover the costs of training, transport, and material (around $1,500).

WAP had additional reasons to take on a new quilt. In the first place, they were actively supporting their communities during the pandemic. The WAP team produced over 1,000 facemasks and prepared emergency kits with masks, soap, and essential cooking material for over 100 vulnerable families and six medical centers. The kits were given out by the girls, who took the opportunity to inform families about the importance of personal hygiene and masks.

Second, the girls were in touch with the Girl Up chapter at Wakefield High School in Arlington Virginia. They had hoped to teach each other how to make soap. When that fell foul of the pandemic, they decided to tell the story of COVID-19 from their respective countries.

The story from Zimbabwe has been worrying. As of September 18, Zimbabwe has reported 7,733 cases, which is less than was predicted and feared. Given the country’s limited testing facilities, the true figure may be much higher. 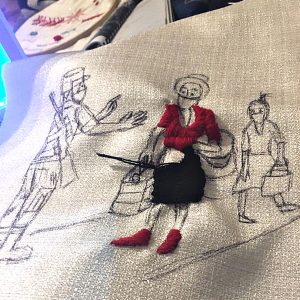 But the real question is – at what cost? Poor families in Chitungwiza and Epworth earn as little as $1,50 a day. The lockdown has prevented them from taking their goods to market and shopping for essential food stuffs. The regulations – on travel and masks – have fallen most heavily on poor families. Evelyn’s block warns of hunger. Vimbai is worried at the increase in domestic violence. Trish finds that rising costs are putting basic food commodities out of reach.

These Zimbabwe squares form part of a international initiative to describe the ravages of CPVID-19. In Nepal, three women artists in the district of Bardiya have produced seven powerful squares which can be viewed here. Nine High School students in the US have also told their stories through embroidered squares and developed a strong friendship with the Zimbabwe artists. The contrast between the three approaches is dramatic.

The squares were assembled into the wonderful finished quilt, pictured above, by Colleen Ansbaugh in Wisconsin. Colleen produced one of the finest art quilts from Malian embroidery for the first Sister Arttists challenge.

Contact Evelyn Sachiti in Zimbabwe evelynksachiti@gmail.com. Meet Evelyn and her team in this video profile. Donate here to support WAP’s soap-making project.  Our thanks to Humanity United for supporting this project. (March 25, 2021) 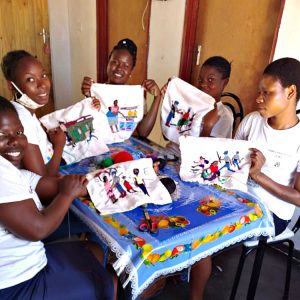 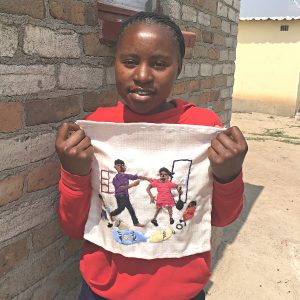 The Covid-19 lock-down and high unemployment have increased the level of domestic violence and divorces in many Zimbabwean households.   Wives and husbands fight over the lack of provisions in their houses. 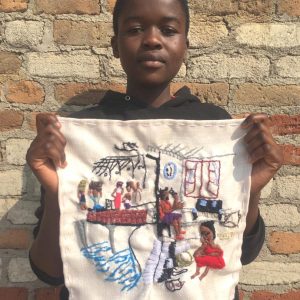 Because of high unemployment, many parents decide to leave their children behind and cross borders to find job opportunities in neighboring countries. They then send money and food assistance to their children and families at the end of every month. However, during this lock-down all borders are closed. Many parents remain stranded in neighboring countries, while children suffer at home with no one to help. 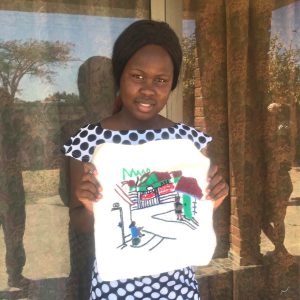 When the lock-down was announced all schools closed immediately. Students in ordinary and advanced levels became desperate. They could not believe that they might lose the whole year and be forced to  repeat the class. Some kept on checking at their school doors, thinking maybe their teachers would come back to the class. 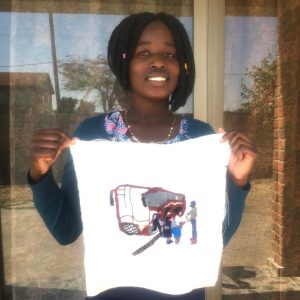 During the lock-down, the Zimbabwean government has opened borders to all Zimbabweans from the diaspora who wanted to come back home. Returnees were required to spend 21 days of quarantine at different centers which were situated just inside the country’s borders. However, these quarantine centers did not offer a hospitable environment and many people decided to flee from them. 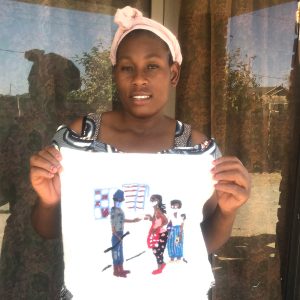 It is obligatory that every person going to work or town should produce a curfew pass/letter at a police road block in Zimbabwe. Police stop every vehicle passing by and ask people to produce their letters.