Daughters of the Disappeared Find Their Voice Through Embroidery in Nepal

Observing International Day of the Disappeared 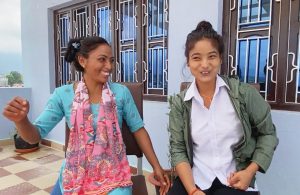 When The Advocacy Project (AP) first met Kushma Chaudhary and Kanchan Chaudhary (photo) in 2015, they were still struggling to recover from the loss of a father and brother during Nepal’s brutal civil war many years earlier.

Kushma was seven when her father, Ton Bahadur, was taken from the family home at night by soldiers in 1999, never to reappear. Kanchan also remembers the awful afternoon in 2002 when her brother was killed by an army patrol that was passing though their village in Bardiya district.

The two families, which are not related, were plunged into poverty by the loss of their breadwinners and ostracized by neighbors who assumed they had connections to the Maoist rebels. United in grief, Kanchan and Kushma became close friends. They also retreated from social life.

Years later, their confidence has returned thanks to their artistic talents, a shared passion for embroidery and the friendship of Peace Fellows who have worked with family members in Bardiya since 2016.

The process has been slow but steady. Kushma and Kanchan, who are both from the Tharu minority, learned to stitch during a training in 2016 organized by Peace Fellow Megan Keeling. They went on to use their new skills to contribute embroidered stories for a powerful advocacy quilt that was shown to a UN working group on disappearances in Geneva.

When COVID-19 struck in 2020, Kushma and Kanchan turned to embroidery to record the tragedy through these haunting images. On a happier note, they have since produced sparkling designs of Nepal’s favorite festivals and made hand-embroidered Tiger bags that will be offered for sale later this year.

Capping it all, Kushma and Kanchan recently completed a week of embroidery training in Dang district for Tharu women who live on subsistence wages (photos below).

Their passage from shy survivors to confident instructors has been captured in an affectionate blog by 2022 Peace Fellow Therese McCarry, who accompanied Kushma and Kanchan to the training in Dang.

“They felt nervous on the first day, but hid their nerves very well,” reported Therese. Nor did they hesitate to apply “tough love” when their trainees failed to follow instructions.

Kushma and Kanchan were rewarded with the sort of respect that they had felt for their own trainers in 2016. Kanchan told Therese later that this would help her at the insurance company where she works “which requires her to be outgoing, proactive, and convincing with strangers.” 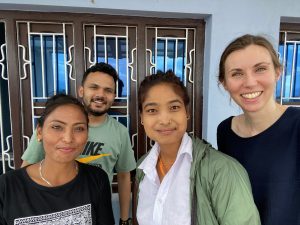 Embroidery seems an unlikely response to the crime of disappearances, which is remembered today on International Day of the Disappeared (August 30) – but only if the focus is on the legal challenge, as opposed to the human impact on family members who are left behind.

The UN working group on disappearances has recorded 59,212 cases since it was established in 1980 and sent 651 new cases to 30 governments in 2021. The group’s 2022 report is expected to cover the crisis in Ukraine, where Russia has been accused of mass deportations, torture and war crimes.

A government-created commission in Nepal has collected files on 2,518 disappearances that occurred in the country between 1996 and 2006. While this is far fewer than many other counties in conflict, most of the cases are unsolved and this continues to trouble Nepali society.

Human rights groups have pressed the government to exhume graves and punish those responsible. But that has been rejected by the government under pressure from the army and Maoists, who signed a peace agreement in 2006. A new bill on transitional justice is currently before parliament.

The Network of Families of the Disappeared (NEFAD), an AP partner, is lobbying for the new law. But Ram Bhandari, who founded NEFAD after his own father disappeared on December 31, 2001, has never hidden his belief that empowering family members takes priority over the legal struggle. In a podcast with AP on August 30 2020, Ram ranked the needs of family members as commemoration and truth-telling first, followed by prosecutions.

Embroidery helps by enabling family members to commemorate loved ones, draw comfort by stitching with others who experienced a similar trauma, learn a new skill, earn money and – finally – work for social justice.

With this in mind, Kushma and Kanchan plan to put their training skills to more good use in 2023. In between growing food for her family and making her embroidery, Kushma works for the Tharu Women Upliftment Centre. AP hopes to fund another training through the Centre by Kushma and Kanchan.

Family is never far from their thoughts. One of Kushma’s recent designs shows her mother painting a tika on her forehead during the Dashain festival, the most popular holiday in Nepal, when she was a child. A small image on the left shows her mother and father watching together.

“In her imagination Kushma celebrates the day with both parents and receives a blessing from her father as well as her mother,” reports Therese.

With thanks to 2022 Peace Fellow Daniel Gurevitch, who supported Therese and the Bardiya artists from the US 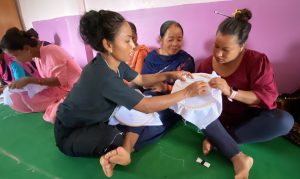 * Background on disappearances in Nepal and the Bardiya Fiber Artists

* Travesty of Justice – How the human rights movement has it wrong in Nepal, December 19, 2016

* Relatives Refuse to Close the Book on Disappearances in Nepal, March 1, 2018

* Forever Haunted by the Disappeared, September 15 2020