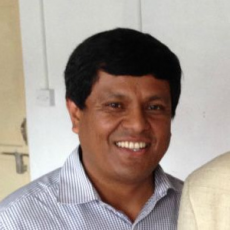 Ram has led the struggle to secure justice for victims and survivors in Nepal. He has over a decade experience working with marginalised communities (in particular the families of the disappeared, victims and survivors of conflict, ex-combatant youth, ethnic minorities, rural youth and women groups). Ram's activism began when his own father disappeared in 2001. In the years since he has pioneered many new techniques of grassroots mobilisation, campaigning and networking. Ram helped to launch the community Radio station, the network of families of the disappeared (NEFAD), the Committee for Social Justice, and the Conflict Victims Common Platform for transitional justice. He has also submitted petitions to the UN Human Rights Committee, the UN Working Group on Enforced or Involuntary Disappearances, and the Nepali Supreme Court. Ram has written extensively on victims' rights and nonviolent conflict in English and Nepali. He is a PhD candidate at Nova School of Law in Lisbon.

Over the past few months of the pandemic, I have reflected on the years of my own  personal pandemic caused by enforced disappearances. Looking back, the journey has been long and hard. It is like a horror movie.

Nineteen years ago on December 31, 2001 my beloved father Tej Bahadur Bhandari, 56, disappeared after being arrested by security forces from the streets of Besisahar and taken to the district headquarter of Lamjung, He was handcuffed, blindfolded, heavily tortured and pushed to the ground. My father was a dreamer, educator, and cultural activist, well known in local communities. He was a school teacher for more than three decades and worked to transform local communities through schools, arts and culture. 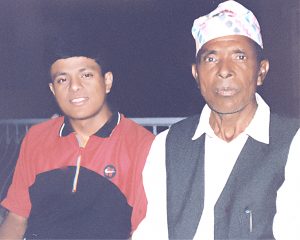 A dreamer and his son: Tej Bahadur Bhandari (right), a respected former teacher and campaigner for social justice, disappeared in Nepal on December 31, 2001. His son Ram has never stopped demanding an explanation.

My father’s dream was kidnapped with him by state-sponsored security forces. He has never been seen again, but his dream is still alive with me.

What happens when a family member is lost not to death or relocation, but to an enforced disappearance?  How do the people left behind cope with that loss and move on?

These questions have been part of my personal life for years. From 1996 to 2006 Nepal was ravaged by a civil war between Maoist rebellion and State forces.  The country suffered a great deal of material and infrastructural damage. But more importantly, the citizens of Nepal have been left with a great psychological burden brought about by ten years of nearly constant conflict.

Some victims were thought to be sympathizers of the Maoists as they moved through small villages. Others were viewed as State supporters. Whatever the reason, these people disappeared and to this day no information has been revealed regarding their whereabouts or what happened to them. The actual number of victims is several times higher than the published figure when one considers parents, spouses, friends and young children that will never know a parent.

Often it was men that were taken, robbing a family of its breadwinner and source of income. The disappearances also robbed the surviving family members of the opportunity to conduct appropriate burial rights and rituals that are culturally important to Hindu families.

As of today, there has been no comprehensive account of these events.  It is very important to tell the stories of the disappeared citizens and celebrate their memory. But the story of how their families have changed and adapted since the loss must also be told.

I became involved in the search for my father after he was forcibly disappeared on December 31, 2001. I still recall the clothing that he wore that fatal day. It was a light grey shirt, half sweater, and black pants. He also carried a golden color watch. Each detail gives me a small visual memory of a father whose fate still remains unknown.

A forcible disappearance acts as a double form of torture and suffering because victims are kept ignorant of their own fate, while family members are deprived of knowing the whereabouts of their loved ones. In Nepal many families went through habeas corpus cases, but the court dismissed them for lack of evidence or because presiding judges remain loyal to the offending regime. We do not yet have full accountability. The government’s attempt to forget, and to provide amnesty to the perpetrators, has created new conflicts and tensions in communities.

I personally went through all the entire process and have achieved nothing in my search for the truth about my father. Gradually, I became engaged in the victim rights movement and have spent the last two decades working for the families of the disappeared. It’s a very personal cause for me and I never imagined how hard the fight would be. But the world has not done enough to acknowledge the suffering of the families, or listen to them. We have to tell our stories to the world, reorganize, and prepare for a long battle to keep the voices of the families alive.

I remember and commemorate all of relatives of the disappeared who have fought for social justice, access to education, equality and expansion of democratic spaces—like my father. The state authorities can never compensate for the absence of our disappeared relatives. But they can listen our voices, address our needs and stop the cycle of violence and re-victimization of survivors.

As I continue on my journey I am optimistic that we will some day find answers and justice. I dream of a world without disappearances.

“What happens when a family member is lost to an enforced disappearance?  How do the people left behind cope with that loss and move on?”