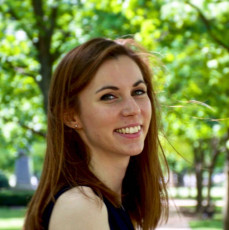 To give you a sense of what Kanchan and Kushma are like as co-leaders, I have an anecdote to share.

On our way from Bardiya to Dang we first took a local bus to a neighboring town to catch a van that would take us to Dang. On that first local bus, it was Kanchan who verbally wrestled out the price with the bus conductor (all the buses or vans have at least one driver and one conductor who takes the fares, tries to bring in more passengers along the roadside even when it doesn’t look like there are any available seats left, and jumps in and out of the vehicle at each army or police road stop). They had quite the back and forth as she negotiated a lower price for the four of us; me, Prabal, Kushma, and herself. She settled down into her seat once she was satisfied with the results of her haggling.

Meanwhile, on the second van ride Kushma sat on her own in the front row to avoid getting car sick while the other three of us were further back. I could see her delicately rearranging her scarf to place a barrier between her nose and the incoming dust from the road. Later she told us that she was using that time in the car to think through her teaching strategies and how best to structure their upcoming training sessions. Both of these observations really make sense when you know that Kanchan is the treasurer for the co-op and Kushma is the president. 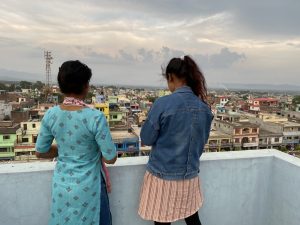 Upon reflecting on the training experience, both Kushma and Kanchan shared that they felt nervous on the first day, but I can confidently say that they hid their nerves very well. From their initial introductions on day one, their voices and gaze were steady. They provided instruction in an even tone and over the course of each day figured out how to transition from general instruction for the whole group to trouble shooting while each trainee worked on their own embroidery square.

They were unafraid to tell someone they needed to redo a portion of their work, or even to pull the stitches out themselves. Based on how Kushma and Kanchan learned to embroider, I think the most foreign part of leading the training was standing in the front of the room and giving directions to everyone at once. When the course of the training transitioned more to troubleshooting, they seemed more used to that from their own embroidery journey with the Bardiya cooperative.

Especially in the beginning when the training participants were still uncertain of themselves, they would call over Kushma or Kanchan (called them “miss”) much more than later on. Sometimes guidance would require Kushma or Kanchan to physically rearrange the way someone was holding their embroidery hoop or hold their hand through a stitch to feel the proper form. 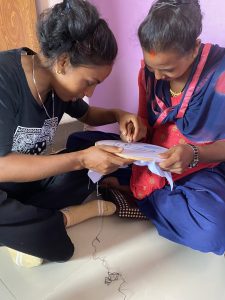 Kushma guiding a trainee through a stitch

Kushma and Kanchan shared after day two that they were getting called over when the thread would fall out of someone’s needle, but that the participants needed some tough love so that they would stop doing that since rethreading the needle is the most basic task. Each day, the trainers were exhausted after spending hours jumping back and forth between people. I think it was helpful for Kushma and Kanchan to have the other there so they could cover more territory as a team. 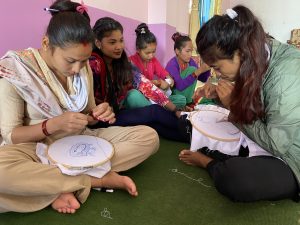 Kanchan helping to rethread a needle

The two trainers worked together in their instruction process in other ways as well. There was one woman in attendance who did not know the Tharu language, so during the first day’s general overviews, Kanchan sat beside that participant and translated what Kushma was saying from the Tharu language into Nepali.

On the last day when Prabal and I were conducting participant interviews, Kanchan noticed that one woman was struggling to understand one of Prabal’s questions in Nepali, so she stepped in and translated the answers back into Nepali for Prabal who then translated into English for me. 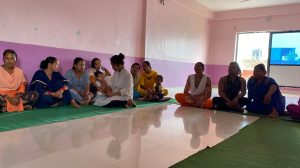 I assumed that maybe the two languages were similar to each other, but Prabal shared that when Kushma and Kanchan would chat between themselves he had no clue what they were talking about. Not only is this bilingualism so impressive, I think it’s also a good example of how important their Tharu identity is in their lives. I found this to be reflected in visual format from one of Kanchan’s embroidery squares.

When the training plans were finalized for Kushma and Kanchan to lead the training with BASE in Dang, Kanchan designed an image representing her and Kushma coming to Dang and encouraging a woman working as a dishwasher to join them. The trainers are confidently standing upright, but rather than representing a power hierarchy, Kanchan specifically dressed all the figures in traditional Tharu clothing to show their shared identity and community membership. 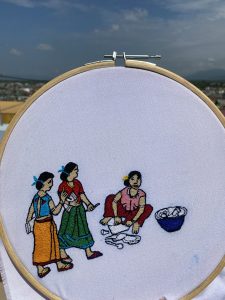 Kanchan’s design of the trainers’ arrival in Dang

Beyond embroidered representation, during our meals together at the hotel I learned that Kanchan owns a ceremonial dress and sometimes performs in group dances traditional to the Tharu community. Kanchan is bringing that pride you gain from celebrating your identity to the training in Dang by supporting other women from the same background to find strength in community and power in sharing your story.

Speaking of storytelling skills, after witnessing a training for the novice stitcher, I’m convinced that what makes the embroiderers in the Bardiya cooperative artists of their craft is not just about their stitching skills but about their ability to create a design that tells a story that is simultaneously universal and incredibly personal. The storytelling design was hands down the most difficult step in the process for the trainees in Dang, but the embroidery cooperative members are pros.

As a further example, take Kushma’s recent depiction of the Daishain festival. She shows a common scene of the festival, but also includes a “what if” alternate reality of this festival living in her mind’s eye. She is able to show how the loss of her father lives within every holiday celebration. Sharing the background behind her design was emotionally overwhelming for Kushma and she had to take a step back. But despite the difficulty in sharing a story verbally, she knows she can always share what is on her mind in a visual medium. 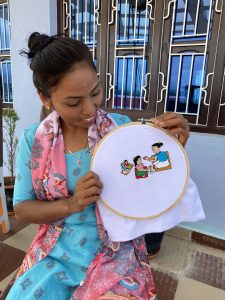 After asking Kanchan and Kushma to compare when they first started the embroidery project in Bardiya to today, what they shared shows how the confidence to tell your story that developed through the fiber arts visual storytelling process years ago translated into using your voice in the community. They both credited the experience with bringing them out of their shell and out of the home.

Today, Kanchan works at an insurance company where she has to have the confidence to interact with clients and put herself out there to gain new customers. Kushma is a regional lead for a NGO focused on empowering Tharu women, and in this role she has to be comfortable in the spotlight as a community organizer.

Even members from the cooperative who are no longer active have stayed involved in initiatives that support women raising their voices in the community. As an example, Sarita, despite working a full time job as a psychosocial counselor, still collected about 100 profiles from women in the Bardiya district about their experience during the COVID-19 pandemic for a NGO whose goal is to raise the voices of women in Nepal.

Writing profiles of the trainers

I’m continually amazed by this group of women, and feel lucky to meet them at a time when their experience in the cooperative is translating into skills and involvement in the broader community.