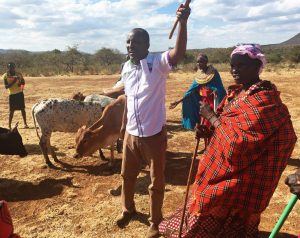 Tribal visionary: Hilary Bukuno sees the pastoralist cow camp as a friend of the environment and a way to end conflict

A leading Kenyan advocacy group has launched a bold experiment with warriors and women from the Pokot and Samburu tribes in Northwest Kenya to mitigate the impact of drought that is killing cows and fueling conflict over shrinking pasture.

The initiative takes the form of two start-ups begun this summer in Samburu County by Children Peace Initiative Kenya (CPIK), a long-time partner of The Advocacy Project (AP).

CPIK has worked with the Pokot and Samburu for over a decade and helped to end open warfare between the two tribes. But tensions are resurfacing as a result of drought, which is forcing herders to encroach onto the land of neighboring tribes in search of pasture.

The drought is also taking a heavy toll on the wives and mothers of herders who are seeing sources of water dry up and their gardens wither.

One start-up will organize cow camps to help competing tribes share natural resources. Over 200 Pokot and Samburu herders, known as “warriors” in their communities, met at a first camp in July and agreed to share their grazing land when the other tribe is facing a severe shortage of rainfall. They also agreed to open up “no man’s land” that lies between the tribes but has lain fallow because of fighting.

The second start-up, known as The Women’s Entrepreneur Network, connects ten women who run small businesses on both sides of the Pokot-Samburu divide. The women met in the Pokot village of Amaya and agreed to expand trade between their villages and set aside part of their profits to help the other group during times of need.

The start-ups were funded by an appeal on GlobalGiving that raised $7,031 from 31 donors. AP assigned Julia Holladay, a student at George Washington University, to volunteer with CPIK as a Peace Fellow over the summer.

Mr Bukuno is from the Gabra tribe and has worked for peace in the Northwest for most of his life. The core idea behind the start-ups, he said, is to build inter-dependency between traditional enemies that will reduce the temptation to fight. This in turn will strengthen resilience against the common enemies: drought and climate change. Mr Bukuno described this as “a clear win-win.”

Mr Bukuno also expressed the hope that setting realistic goals will turn climate change from a “vast and terrifying threat” into practical action that can be taken by communities at risk like pastoralists. This will likely be discussed at the UN conference on climate (COP 27) which opened on Sunday in Egypt.

Another goal of the start-ups is to encourage tribes on both sides to identify and exploit comparative advantages, said Monica Kinyua, who co-founded CPIK with Mr Bukuno and manages the Women’s Entrepreneur Network.

The network was inspired by Josephine Lengapiani (photo below), one of its five Samburu members. Ms Lengapiani, 37, has built a successful business trading with Pokot families. She buys maize from Pokot women, grinds the maize at her small posho mill in Longewon village, and sells the meal back to the Pokot women when they visit the market in Longewon to sell charcoal.

She told Peace Fellow Julia Holladay that on a busy market day she serves about 30-50 Pokot customers: “Without peace, you can’t do anything.”

Ms Lengapiani uses her mobile phone to communicate with her Pokot clients and transfers money through M-Pesa, a phone service that is widely used throughout Kenya. This is an example of how simple technology can help build peace between pastoralists, said Ms Kinyua.

CPIK’s experiment is taking place in one of Africa’s most striking but fragile environments. Samburu County is home to some 310,000 Kenyans, including herders who measure their wealth by the size of their herds and move across huge distances in search of pasture.

But drought has upset the balance between traditional pastoral practice and the environment, as CPIK discovered during a visit to the Northwest last year. Mr Bukuno and Ms Kinyua found village elders “in a state of panic” about their ailing cows. As if to underscore the crisis, one animal collapsed and died at the recent cow camp.

Mr Bukuno said that a tipping point appears to have been reached, and that all sides are now aware of the threat. But, he said, this presents risk as well as opportunity.

“They understand that they face a common threat and must collaborate,” he said. This explained why over 200 warriors attended the camp in July – far more than expected.

But drought is also adding to the pressure to resume raiding. Ms Holladay spoke to a former Pokot warrior, Amosilia, who turned his back on fighting after a close friend died in his arms during a raid. Amosilia has turned into an advocate for peace and now enforces a ban against raiding by Pokot warriors in Amaya village. But this has exposed him to insults and threats.

The two start-ups were made possible by years of patient peace-building by CPIK in Samburu County. The group begins by organizing peace camps for children from the two tribes and follows up by arranging for visits (“peace holidays”) between villages. This builds friendships between parents, village elders and eventually warriors, who are often parents themselves.

CPIK held its twentieth peace camp in May. Most families that are participating in the two start-ups enrolled their children in peace camps.

Looking ahead, CPIK is seeking $50,000 for a year-long program to monitor the two start-ups, expand the model to more frontline villages in Samburu County, and organize peace camps in Baringo County, an area that has been plagued by violence in recent years.

If, as is feared, the drought worsens, CPIK may also invite government agricultural extension officers to attend cow camps and advise herders how to better manage their animals. This could help to reduce the size of herds which is a major factor behind the loss of vegetation and pasture, said Mr Bukuno.

“Healthy cows will live longer and produce more income for their owners,” he said. “That will reduce the pressure to buy more cows. It’s another win-win.”

* Read Julia’s blogs about the launch of the start-ups