In a previous blog, I talked about what happens at peace camp. On June 16th-19th, CPI Kenya held a peace camp part 2 of sorts, known as a holiday peace exchange between the same two villages, Chepkalacha (Pokot) and Kiserian (Ilchamus). This time, we were hosted by Chepkalacha Primary School. Unlike peace camps, which are mostly focused on building friendship through fun and games, the holiday peace exchange teaches students about feelings and conflict de-escalation…

It was particularly hot that day, and the two of us both needed a break from playing games that Hilary was leading nearby… so Dickens, a young Ilchamus boy from Kiserian, and I took a seat under the shade of a big tree in a field near Chepkalacha Primary School. 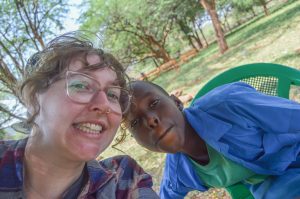 Dickens and I talking and cooling off in the shade.

Dickens and I talked about the U.S. and Kenya, how long it takes him to walk to school (1.5 hours each way!) and bonded over how we both love school—sharing our favorite courses and what we like to study. (Dickens enjoys English best and I like history). I asked him if he had made any friends over the past month and what he felt about the peace camp. “I’m sad to leave my friend today. But I’m excited for Brian to come to my house soon so we can kick the ball together out front,” said Dickens. Brian is Dickens’ Pokot friend from Chepkalacha—they became friends at the peace camp in Kiserian just two weeks earlier. He continued: “I hope that one day even our parents can become friends and that there will be peace.” 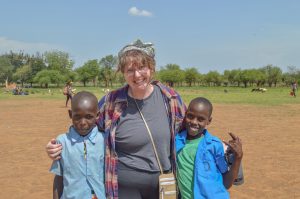 Brian (left), myself, and Dickens (right)

A month ago, Dickens’ hope for friendship and peace was not achievable. The people from Chepkalacha belong to the Pokot tribe, and Kiserians to Ilchamus. They’re in the midst of conflict because as natural resources like water dry up, some pastoralists engage in cattle raiding to refill their herds. Cattle raids by one tribe are repaid with retaliation from the tribe whose cattle were stolen, and on and on it goes as animosity builds between Pokots and Ilchamus.

But because of CPI Kenya’s work the past month with Pokot and Ilchamus students, over 100+ students like Dickens and Brian are now friends and examples in their communities that peace is possible between the two communities.

On the last day of the holiday peace exchange, Pokot family members came to Chepkalacha Primary School for the closing ceremony. The same tree that Dickens and I sat under a few hours earlier was now filled with Pokot family members gifting Ilchamus students chickens, snacks, money, and homemade goods. There was an air of celebration and excitement, with Pokot parents lining up to have their picture taken with their children’s Ilchamus friend. 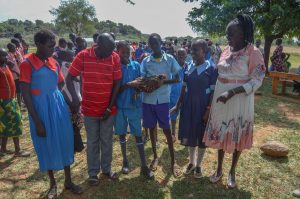 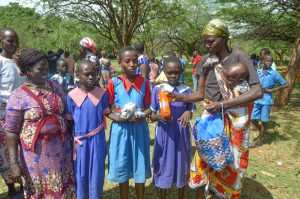 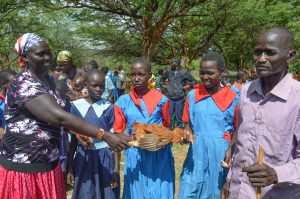 Goodbyes have always been hard for me. I once cried saying bye to a dog I met during a two-week high school exchange program. So I won’t pretend that the closing ceremony didn’t bring some happy tears to my eyes, especially as the Ilchamus children loaded up in the military vehicle to go back to Kiserian. Pokot women danced around the military vehicle in a traditional send off, with children waving and yelling bye to each other (some even yelling, “bye Julia Holladay!”). 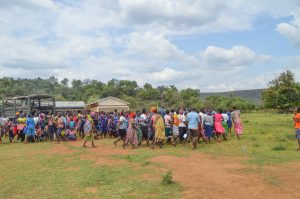 Pokot families dance around the students before the Ilchamus students leave for Kiserian. 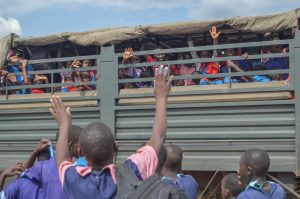 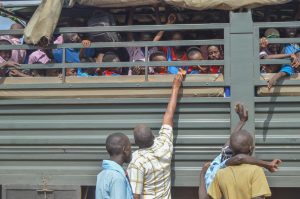 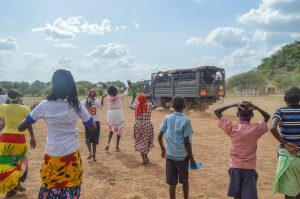 While goodbyes may not be my strong suit, the energy and emotion from both communities poured into the peace camp and holiday peace exchange make it so poignantly clear that CPI Kenya’s approach to peace building is undeniably transformative.

Dickens and Brian are sparks who are helping their communities understand that their shared humanity is greater than the conflict at hand. Sparks ignite flames, just as students like Dickens and Brian are an important part of the larger picture leading the way to peace.