When Mr. Dung first told us his story, it sounded as something that was coming from one of the many documentaries done about Agent Orange; His wife, who also helped during the war by building roads, had 13 children and out of all of them only 1 made it alive. The rest of them didn’t make it more than 8 months. 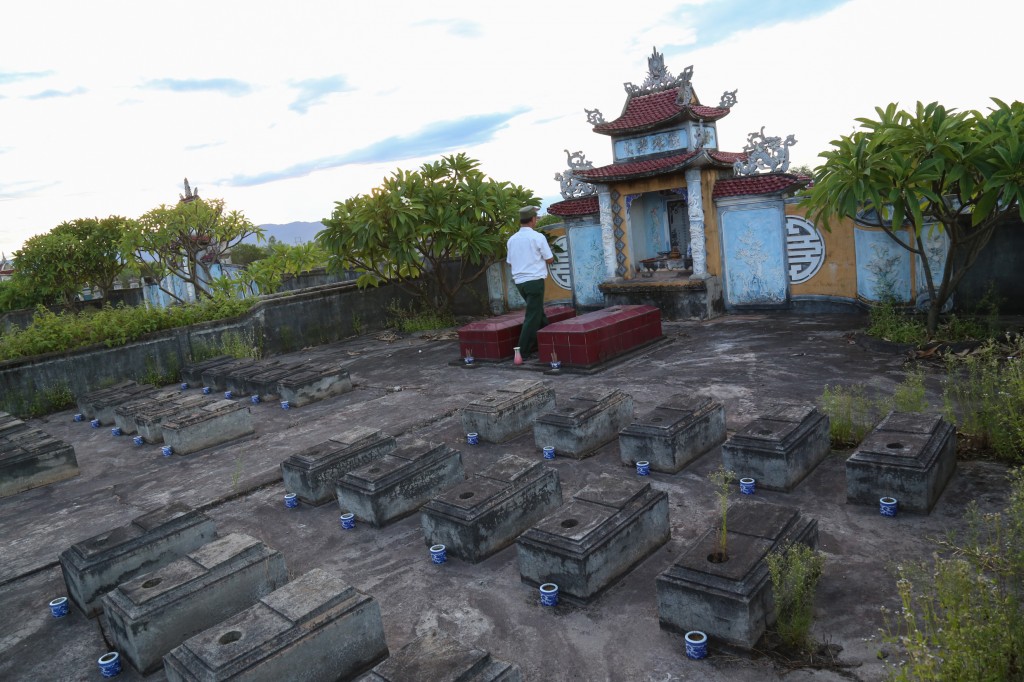 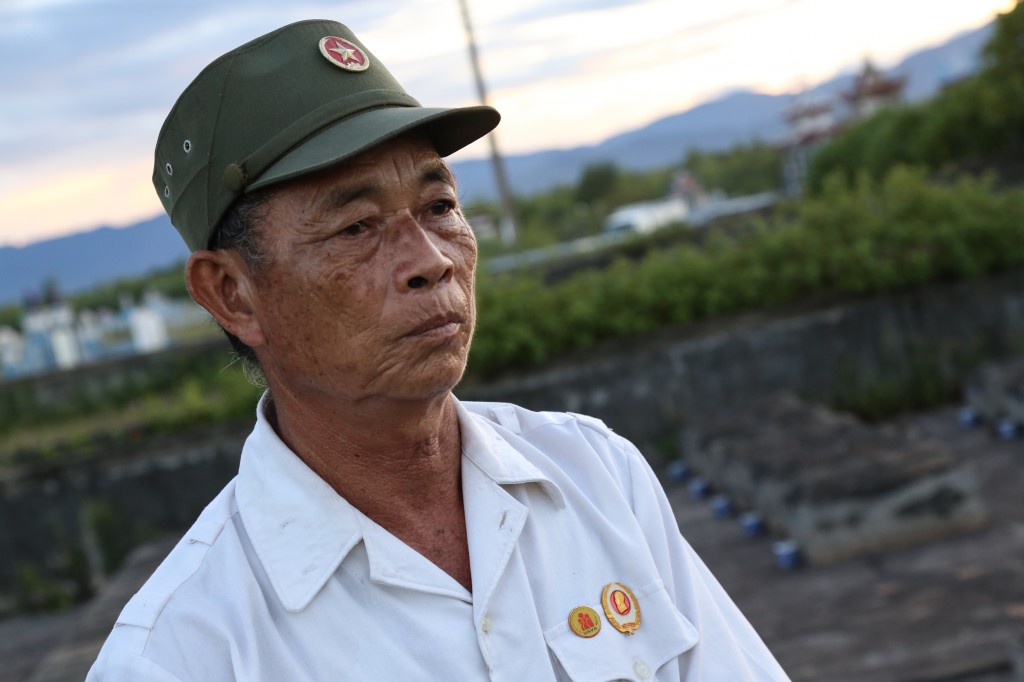 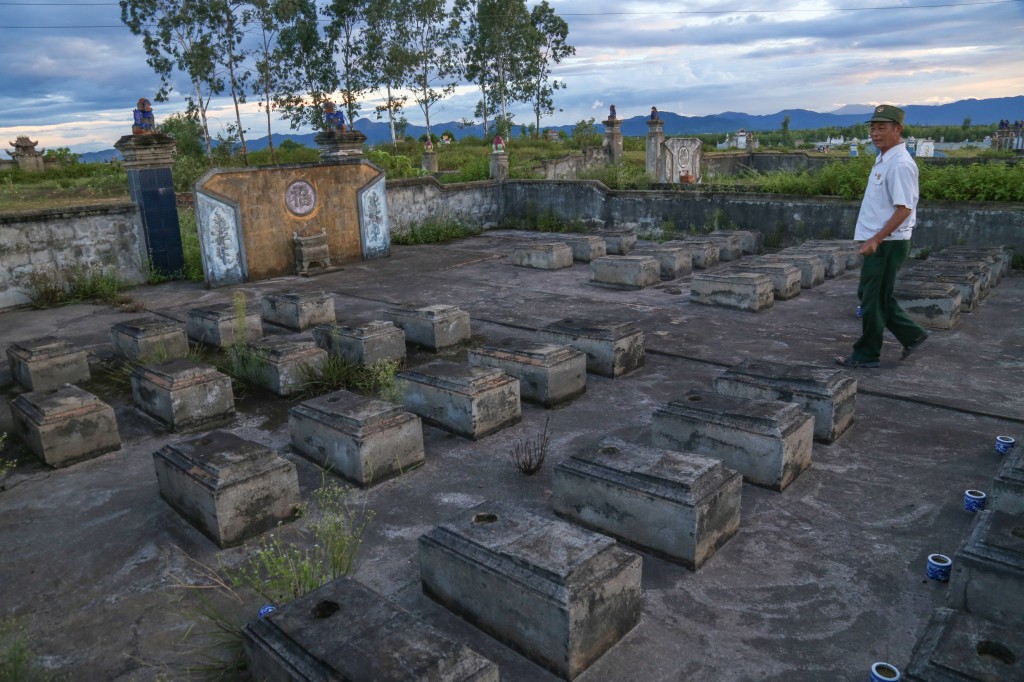 The overall feeling you sense from them is of sadness and exhausting, after all they invested several tough years fighting for what they thought was right and getting affected by AO while doing so. When Mr. Dung describes AO he tells us, like many other soldiers we visited, how he saw the forest burn as the American troops sprayed the herbicide. What we hear that is new is how hard it was to breathe and the strong smell that it had as he got closer. 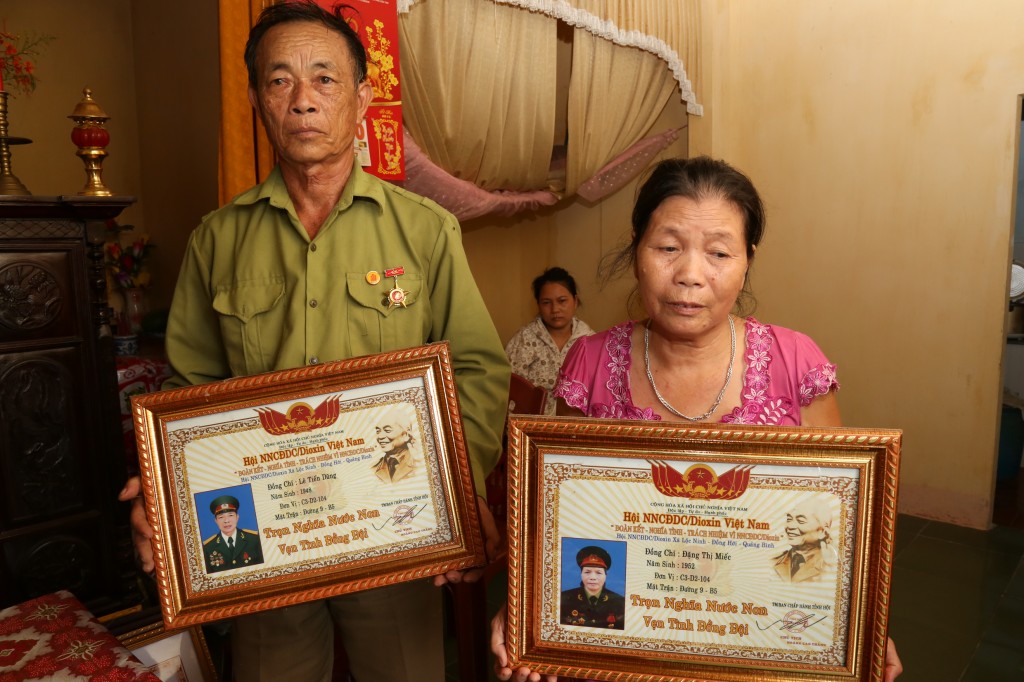 After 12 attempts, Mrs. Dang was able to conceive 1 child, a daughter, who received 700 000 vnd (31 dollars per month) as a certified Agent Orange victim. Mr. Dung and Mrs. Dang receive 3.2 million vnd ( 142 usd) per month for their respective illnesses related to AO.

The daughter looks, or rather doesn’t, at me in a way I would not forget – a rather defeated look with little to no reason to smile. From afar she looks healthy but maybe going through some dark moments, an understandable feeling given her condition. She doesn’t have any malformations, cerebral palsy or anything like that. Instead, it’s her IQ which has been affected along with the never-ending headaches that so many AO victims have already mentioned to us. Given all this issues, she has developed a severe depression which seems to have taken over her life. 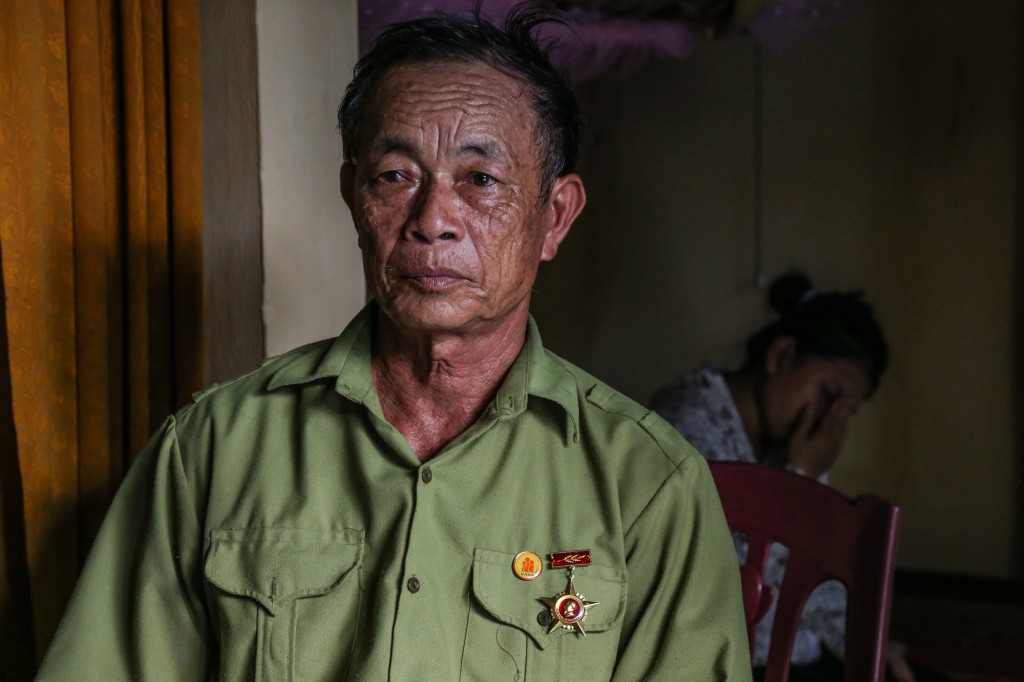 ‘She has a daughter’, says her mother. I follow on this lead and ask where’s the husband then and I see no sign of him. ‘He left and has not returned’ she adds. This is a common issue that a lot of AO victims face, the rejection not only by society but by those who should love them the most. The daughter looks down and feels ashamed but what her mom just told us and I certainly feel uncomfortable as I don’t want for anybody’s feelings to be hurt. ‘And this is my granddaughter’, says the mom and she introduces me to this very sweet girl who is wearing glasses and is 7 years old. 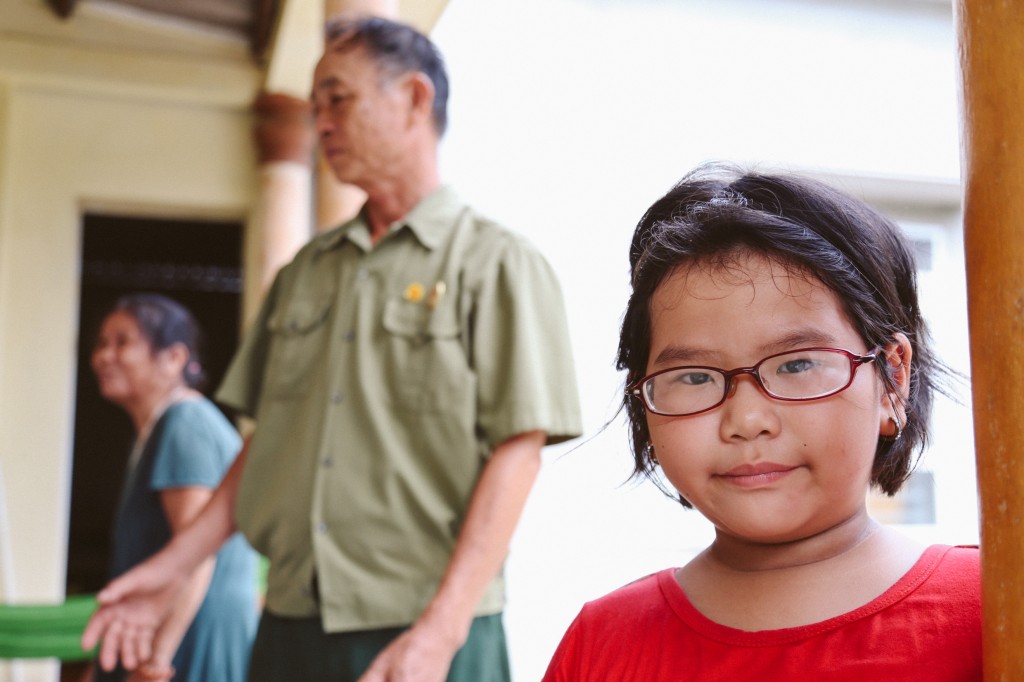 We find out that the granddaughter as healthy as she looks has started developing ‘eye issues’ but it is still to early to know how much further are these symptoms going to develop. As a rule of thumb though, her eye doctor has recommended for her to visit every 6 months, advice that she follows religiously.

As we start discussing the benefits that she might get, something comes up which we have been warned about before; third generation AO victims don’t get any money from the government. Basically, their families have to come up with any money for any kind of medical treatment, as it is with her case. For this reason, several of the families simply drop the third generation AO victims in orphanages that take them in without asking any questions.

Yet I notice we are missing 1 more person, Mr. Dung’s nephew it is. His resting on a wheelchair and showing signs of some kind of neurological disorder that have left him unable to speak, weighting very little but still reacting to people and smiling whenever possible. Mr. Dung’s brother died a few years ago from AO exposure and the family decided to bring him in. 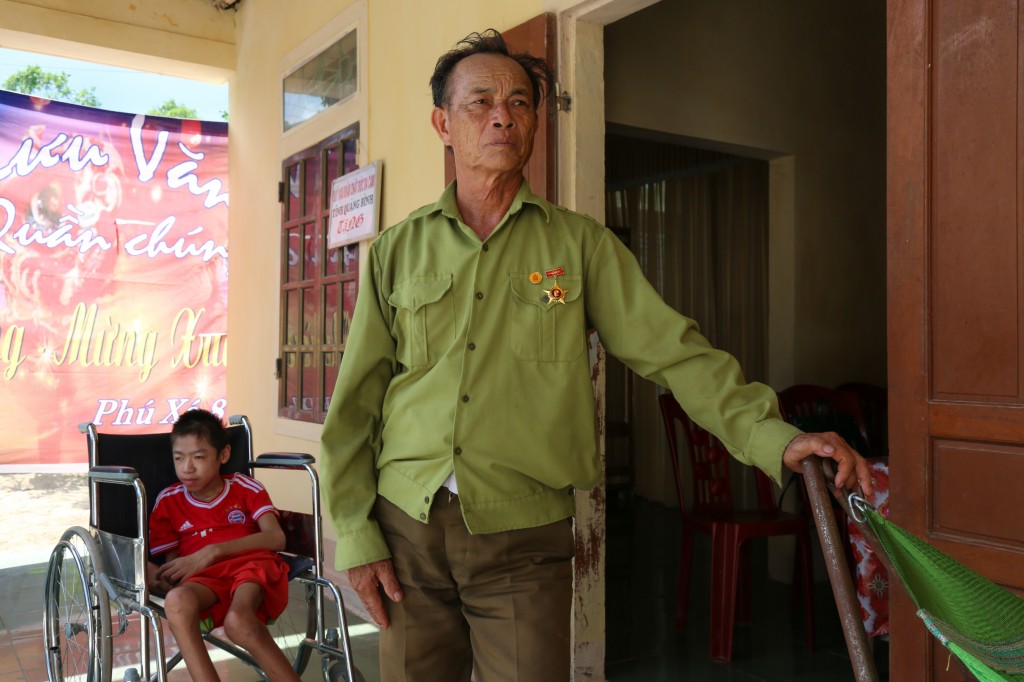 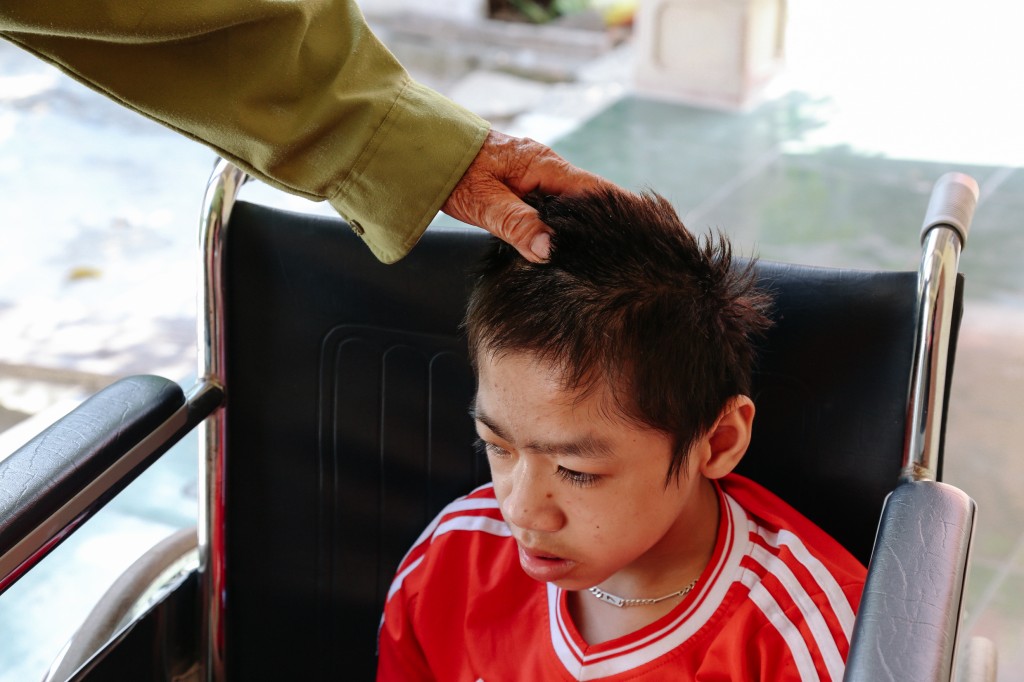 Mr. Dung family’s story is one very hard to digest but one necessary to better understand some of the challenges, legacies, and sadness that some of these families have been left with.