For those who study communications, media or journalism, language is everything. As a matter of fact, the different languages we speak might potentially even shape the way we understand what is being said or the information that is given within a sentence. Yet, this is something that not many of us take the time to think about.

Take for example an article from the New York Times titled “Does your language shape how you think?” in which the author states this simple comparison,

‘Suppose I say to you in English that “I spent yesterday evening with a neighbor.” You may well wonder whether my companion was male or female, but I have the right to tell you politely that it’s none of your business. But if we were speaking French or German, I wouldn’t have the privilege to equivocate in this way, because I would be obliged by the grammar of language to choose between voisin or voisine; Nachbar or Nachbarin. These languages compel me to inform you about the sex of my companion whether or not I feel it is remotely your concern.’

One of the first things I learned when reading about the Vietnamese language is that when you talk about personal pronouns, specifically ‘You’ or ‘I’, there’s more to it than what the English language tells us.

In English, we use ‘I’ and ‘you’ in a very non-descriptive, non-comparable, and informal way. In Spanish, when we refer to ‘you’, we have the informal ‘tu’/‘vos’ (depending on what part of the world you are at) but also the very formal ‘usted’. Spanish then goes one step further than English by establishing how close you might be to the person you are referring to by the simple usage of a personal pronoun.

In Vietnamese things get even more descriptive. As with most Asian cultures, Vietnamese people have deep respect for their elders so they use age as the variable for their personal pronouns. Therefore, when you are taught Vietnamese pronouns, it is wise to shift from wondering how to refer to him, her or them. Instead, it’s better to understand that personal pronouns change depending on your difference of age with the subject which you are referring to. The question that we should then ask ourselves should be, Is the person younger or older than me?.

Here are a few examples of how ‘I’ and ‘you’ should be used. 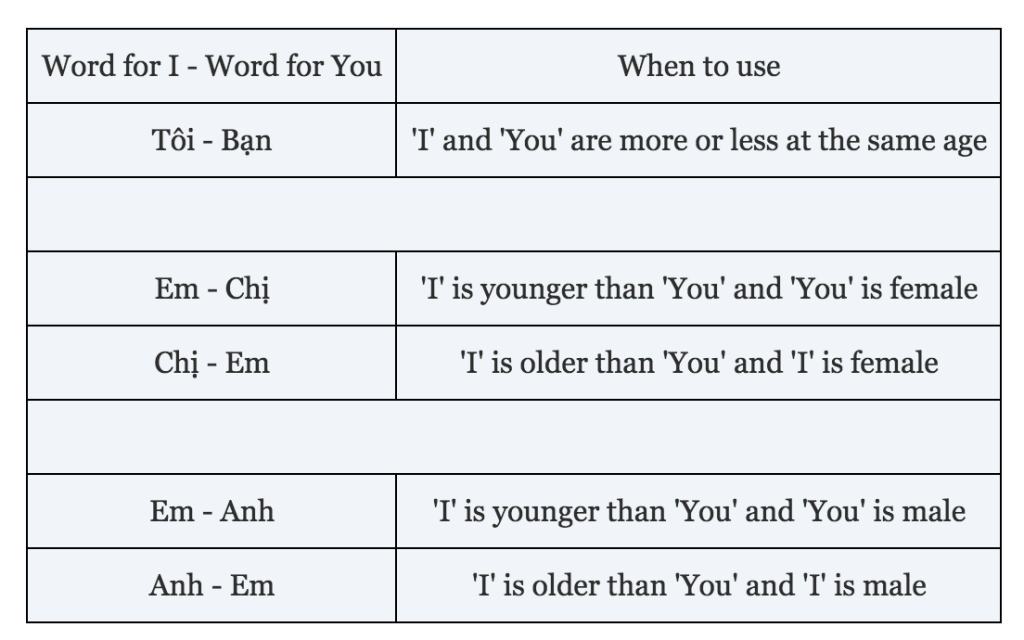 Now, so far so good -as long as the other person is within a ‘moderate’ age difference of you (let it be approximately 10 years or you feel as if they are part of your generation). If that’t not the case then you might just have to refer to this other table. 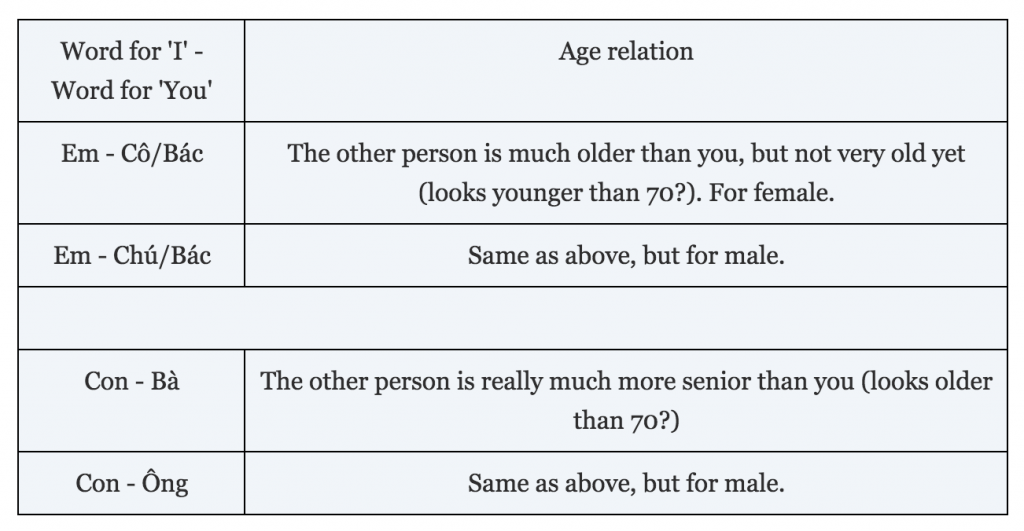 Given that you probably won’t be using Vietnamese as your primary language anytime soon, I won’t confuse you with the rest of the personal pronouns. Let it be known though that they continue to change in even more creative ways, also depending on what part of the country you are from.

Just as with Spanish there’s also the informal and formal way to refer to something or someone, which are to be used with caution. Yet, if you are foreigner you get get a little bit of leeway if you mess up. Moreover, at first your pronunciation will most likely be wrong. In this circumstances, a pen and little notebook will come in handy to write down the sentence.

If you’ve gotten this far in this very dense blog post then you might be wondering, How the heck do you, Armando,  communicate with people then? Taking in consideration that most people in Dong Hoi don’t speak English, that’s a certainly a fair question. The answer is fairly simple and quite amusing: Google Translate.

Yes, that Google site that you might have used to figure out what your friend miles away from you is posting about on Facebook in his/her mother tongue. The Google Translate app (for mobile phones) not only allows you to type but also speak directly whatever you want to say, then types it and even says it in Vietnamese. After you are done, the other person can reply in their language and the app will interpret and translate just as it did for you before. (Video coming soon)

I know what you are thinking,  ‘This sounds like the most ridiculous process, not to mention the awkwardness’. Yes, it might just be that, but I have found that people in Vietnam really love seeing it work and are even willing to go through a few awkward moments to be able to communicate with you. It really is the stuff I imagined from watching ‘The Jetsons’ or ‘Back to the future’. (If only they could have also delivered on their flying cars promise).

How does Google know what’s the right personal pronoun to use?, you might be wondering. Well, it plays it safe and uses the most formal or respectful way in which people refer to each other; something that people find rather endearing. This process has had me communicating with perfect strangers in the most unusual but also wonderful way possible- passing the phone to each other, speaking in our own language, at times laughing but, more importantly, with a deep desire to engage and don’t let the language barrier stop us from further discovery.

Another fascinating language difference in Vietnamese is the use of , what I’m gonna call,  a ‘root word’ plus its modifier to make a completely different word all around. Let’s take the word ‘water’ or ‘nước’ in Vietnamese. If you want to ask for soy sauce you ask for ‘water + soy bean sauce’ or ‘ nước tương’ and the same process for a soda, ‘nước ngọt’. ‘‘Nước’ being the ‘root word’ and the rest taking the action of the modifier.

Granted ‘nước tương’ is certainly the most common way to refer to soy sauce there’s also ‘xi dao’  (pronounced zee-yaoh) which is derived from its Cantonese name and sounds an awful lot to the way we call it in Peru, sillao (pronounced sea-yaoh). This discovery was quite a surprise but made perfect sense given the slave trade that took place in the 19th century which brought Chinese slaves to work at the guano islands in Peru. Eventually, these immigrants integrated into Peruvian society by opening their own small business but that’s a story for my next blog post.

As I mentioned above, Google Translate has become my best friend but don’t you for a second, dear reader, doubt that I’m trying to speak the language. Vietnamese is a fascinating language with so much history within it that it makes me constantly want to inquire more about the most simple phrase and practice it like there’s no tomorrow.

Stand by for the second part of this blog post, coming to you sometime next week. Part II will discuss everything I originally wanted to include in this post but that got pushed back by my desire to explain how intricately fascinating my linguistic experiences are here, in the good land of Pho.