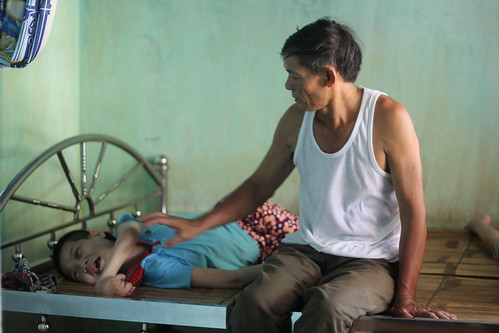 Phuong is the first person to see us as we park the car in front of their home. Mr. Duc welcomes us inside and we sit on a mat in their common space. Phuong and No’s and Lanh’s rooms open toward the common space.

Ms. Hong is not at home during our visit. Mr. Duc candidly describes her mental health decline after the death of their youngest son in 2014. At the time of our visit, she had been in the Hue hospital for nine days tending to her mental health. Mr. Duc mentioned that she “ends up in the hospital every few months, about 2-3 times per year” and that her niece accompanies her during those times.

Despite her absence, Mr. Duc’s positivity and charisma fill up the room. It is no wonder that he and his family were selected to appear on a charity television program advocating for disability rights. (Of which, he says pointing to the TV, he was gifted his TV from by a company in Ho Chi Minh City that was deeply moved by his family’s story.) 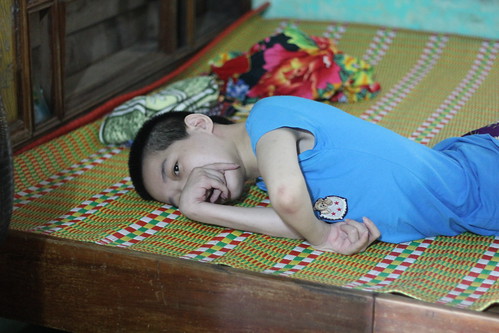 Le Thi Lanh (30 years old) lays on her bed overlooking the common space. Mr. Duc explains that she understands things well and is even able to use a smart phone to select videos she wants to watch. Lanh flashes a sheepish smile and puts her head down.

While she Ms. Hong is away Mr. Duc is responsible for everything and seems to have a very small (if nonexistent) support system–he seems to prefer it this way. He is proud to tell me that his youngest daughter has gotten married and is now a teacher on Phu Quoc Island and his only surviving son has become a policeman in the commune. Phuong, No, and Lanh are doing well. While chuckling and looking over at Lanh (who had been engaged in the conversation), Mr. Duc remarks that she is able to use the smart phone and look up videos she is interested in watching. Lanh flashes a sheepish smile and puts her head down. 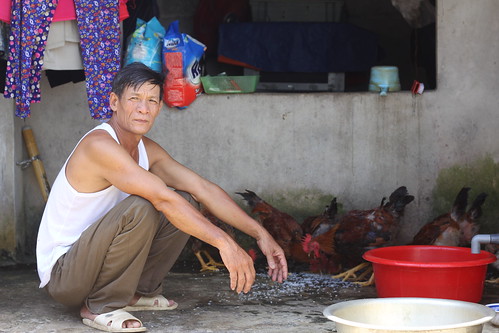 Mr. Le Thanh Duc walks us to his new chicken coop and feeds his chickens. He was able to improve this area using the income from the pig sales.

Since the Formosa environmental disaster in 2016, Mr. Duc has been raising chickens and pigs to supplement his income. He sold all of the pigs in 2017 for 15M VND (~$650 USD). There was a rampant pig disease at the time and he wanted to get out ahead of it. Mr. Duc used the profit to invest in his chicken-raising business model and relaunch his fish sauce business in early 2018.

The government facilitated an environmental clean-up and has since declared the water in Quang Binh clean and clear of pollutants. Interestingly enough, Mr. Duc had started to plan to open a grocery store but did not have enough capital to get the business off the ground. Once he learned the ocean was clean again, he leveraged the capital from the pig sales and existing knowledge to pick up where he left his fish sauce business in 2016. 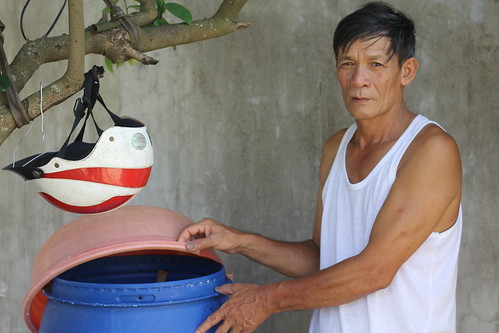 The blue barrel is where Mr. Duc makes his fish sauce. The barrel is full of fish sauce and he hopes to sell it this fall. He would like to expand this business and hopes to qualify for a loan from the AEPD-Zebunet micro-credit program to do so.

Mr. Duc explains that it takes nine months to make fish sauce and he anticipates being able to generate 5-6M VND per year from it. If he were able to produce more sauce, he would be able to generate a greater profit. Unfortunately, however, he does not have any additional capital to invest at this moment.

As Mr. Duc was recounting and sharing his experiences, Mr. Thuan (Outreach Worker) mentioned the credit program AEPD currently implements with the support of Zebunet, a French nonprofit organization. Mr. Thuan believes Mr. Duc could qualify for a 10M VND loan and offered to connect him to the program and/or Zebunet to scale the business and thus, improve his annual income. Currently, the family makes 15M VND per year (which includes the 500,000 VND per month generated by chicken sales) and it is just enough for food and their expenses.

But a bigger question and worry remains for Mr. Duc: “What will happen to my children in the event of my passing?” Like other Campaign beneficiaries, Mr. Duc is thinking toward the future and wondering how best to set up a contingency plan in case of an emergency. And that is truly the big and very real question that haunts these caregivers. 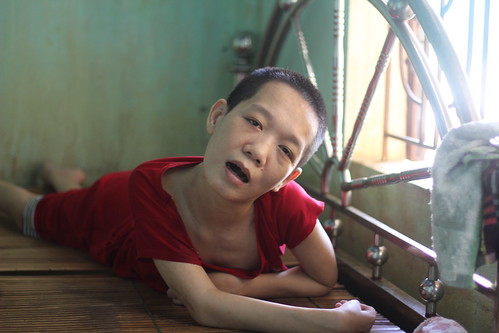 Le Thi Phuong (35 years old) is Mr. Duc’s oldest daughter. She shares a bed with No and is constantly peeking out of the window. She was the first to greet us when we arrived at Mr. Duc’s home.

The best he can do is save enough money such that his daughters can live at the only home for persons with disabilities in Quang Binh after his passing. In the meantime, though, the best we can do for/with them is to support his sustainable endeavors, provide guidance, and advocate for “contingency plans” and holistic institutional support.

Mr. Duc is prepared to do it and we are confident in and inspired by his abilities. It is a true pleasure to work with Mr. Duc’s family.