Today’s blog I wanted to talk about a really interesting crime prevention program that I was reminded of this past weekend while in Trujillo.  A few years ago, when I was still working at the Wilson Center, I edited a book on citizen security and crime in the Americas.  I consulted with a highly experienced criminal defense lawyer, at that point he was basically also an expert on crime and violence in the country.  We discussed a bit about his work as a criminal defense attorney, as well as an interesting occurrence, in which he described a pilot project taking place in the province of Lima.  This district had a number of gang-ridden neighborhoods and a dearth of police officers, thus creating a perception of fear and insecurity amongst citizens. So the local police, along with neighborhood groups, decided to take inspiration from the other youth patrols around the province of Lima and set up a broom factory in the neighborhood.  They would train former gang members in how to make brooms (and other cleaning products), make the brooms during the week, and sell them in the neighborhood on the weekends.  They would receive 40% of the profits from the brooms, and the other 60% would go to the factory.  They would also have the opportunity to take classes in drug prevention, leadership, and STD prevention.

What was the conclusion of this project? According to the study, the broom factory had a positive effect on lowering the level of gang activity. Interviews showed that the program was not only positive for crime prevention, but also for helping the community to understand the social circumstances that often propelled the youth into gang membership from the start.

This is all related to my visit to Trujillo, I promise. On Sunday, we happened to pass a little fair off of the main square, where various members of the police apparatus were explaining their work to those that stopped by. After a brief saunter around the fair, I came to a booth operated by a bunch of young men wearing matching vests.  They were the guys working in the broom factory and citizen patrol in Trujillo! 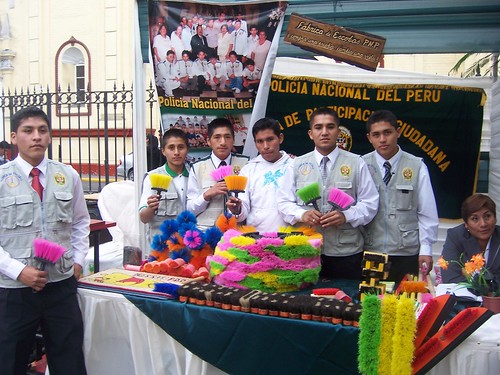 I was so excited to learn that a project that I had read about a few years ago had spread throughout Perú. Of course, I was also thrilled to come face to face with the same social actors I had read about in the aforementioned work.  While they might not fit directly with the work of EPAF, they do certainly fall under the umbrella of the Advocacy Project’s mission to work with those that are underrepresented and marginalized in society.  Gang members tend to be just that, and I was glad to see evidence of successful, organic, sustainable projects spreading across the country in order to address this issue.