Charlie Walker (SOS Femme en Danger – SOSFED): Charlie completed an undergraduate degree in International Relations and French at the University of Leeds. Charlie earned a Masters degree in Post-War Recovery at the University of York, and her research took her to the Eastern Congo where she encountered SOS Femmes en Danger (SOSFED). Charlie has also worked with vulnerable migrants in Spain and Britain, and with the British Red Cross. After her fellowship at SOSFED, Charlie wrote: “Perhaps the most significant cultural understanding that I gleaned from the experience was a deeper knowledge of the position of women in Congolese society, and of the value of women’s rights education to empower women and encourage their husbands, fathers and brothers to support such a process of empowerment."


Back to Uvira: “The Horror!”, Quilts, and a goat named Janosch…

Hello and welcome to instalment #1 of my blog from Uvira, DRC, which will trace my journey as a Peace Fellow for Advocacy Project. For the next 3 months, I will be working with SOS Femmes en Danger (SOSFED), a small Congolese organisation who since 2003 have been supporting victims of sexual violence in South Kivu by supporting women following incidents of sexual violence, promoting measures to minimise exposure, empowering women through education and training so they can better support themselves and their families, and advocating for an end to sexual violence and its appalling after-effects.

As I discovered during a research trip there earlier this year, shockingly few organisations provide much-needed support to the thousands of women every year whose lives, often already more difficult than most of us in the west can comprehend as a result of almost two decades of conflict and chronic poverty, are further ripped apart as a result of being raped. SOSFED is one of such rare lifelines.

I arrived safely on Friday after a looong trip from Manchester, (via Amsterdam, Nairobi, and Bujumbura, no less)! Things don’t appear to have changed a great deal in Uvira since I left in May, although the run-up to the elections is becoming more evident, notably in Uvira centre a giant billboard has appeared sporting Kabila’s face next to “before and after Kabila” images of children in Primary Schools – those (apparently)of yesteryear in dirty clothes on rugged benches without books, and those of the shiny new DRC under Kabila in sparkling uniforms, books open and beaming behind their new workbenches (watch this space for more on the run-up and preparations for the elections due in November)!  In other (and perhaps somewhat less significant) news from Uvira – I now appear to own a goat. We’re calling him Janosch.

I can’t wait to start work! The rape recovery programme has two centres in Fizi territory (see map below) which offer women a safe place to stay, medical care, individual and group counselling, empowerment sessions and skills training for up to three months following their arrival at the centre, in addition to reintegration support when they return to their communities. They also run educational on health, women’s rights, financial management and literacy, and recently launched a campaign to create a culture of rape prevention, purchasing land which women can cultivate together, minimising their exposure to sexual violence (many women are raped whilst alone cultivating their crops). 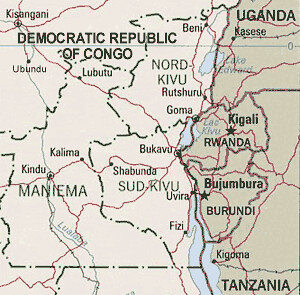 Security permitting, we’ll be making trips in the near future down to the two centres, in order to deliver materials for vocational and therapeutic sewing projects which a previous Peace Fellow began in 2010, and which we are planning to revive this summer, and to meet the centres employees and women currently part of SOS FED’s recovery and rehabilitation programme – stay tuned for photos and updates from our visit soon!!

As I mentioned in my earlier vlog, media reports of sexual violence in the Congoare widespread – newspapers periodically churn out articles complete with shocking taglines and horrifying statistics regarding rape in the Congoin a near-hysterical and largely analysis-free tone echoing “The horror! The horror!” of Joseph Conrad’s protagonist’s journey into the Heart of Darkness so many years ago (see Cara Kulwicki’s astute article on media coverage of rape in the DRC ). In an effort to steer readers away from this rather useless and unhelpful understanding of the situation in eastern DRC, in this blog, I’ll be doing my absolute best to provide a more nuanced and analytical view of the underlying causes and consequences of sexual violence in the region, and highlighting how SOSFED and the women of South Kivu believe it can be brought to an end.

Stay tuned for more news from South Kivuand my journey as a Peace Fellow with SOS FED!