A (Brief) History of the Railroad Expansion and Its Woes

The history of the railroad expansion really starts with the history of Nairobi.  It was founded in 1899 in the middle of a swamp.  Breaking the distance between Mombasa (on the coast) and Kampala, Uganda, it was established because of the railroad, founded as a depot.  Six years after its founding, it became the capital of the British protectorate and then the capital of newly independent Kenya in 1963.

Independence increased the boom of urbanization, and the city centers began to swell.  Nairobi’s population more than doubled ten years after independence, and now its population sits at over three million.  The slum creation can be traced back to urbanization; the infrastructure of the city could not handle such a rapid influx of people; the people could not handle the high cost of living.  The general consensus is that there are 183 informal settlements or slums in Nairobi, which hold anywhere from 40 to 60% of the city’s population.  A Shack/Slum Dweller International (SDI) report estimates that 63% of the land dedicated to the settlements sits on public land that has been privatized since the particular slum came into existence.  The rest of the land is public land, either contested or uncontested.  The 60 meters of railway corridor in Kibera and Mukuru count as contested public land.

And that’s what the disputed land is, just a corridor of 60 meters – that’s 100 feet on either side of the railway – that stretch along 11km of track.  But the track has become an everyday part of life for these people; some traders literally sell their wares on the track, simply moving off when a train goes by.  It is a road, a community hub.  And while 60 meters doesn’t sound like a lot, the Relocation Action Plan (RAP) counts that there are over 4,600 homes, 4,300 businesses, 280 institutions (including churches, medical clinics, and schools), and 790 public facilities situated in those 60 meters.  And it seems to treat these figures as trivial.  The people of Ngazi Ya Chini, on the other hand, think those estimates are low.  It seems like not much has changed in a year…

The story behind Ngazi Ya Chini can be found on Christy’s and Louis’ blogs.

Here are the basics of the issues.  The expansion is going to happen, and it is scheduled to conclude in 2012.  The community is now trying to form a resettlement plan that is fair.   Or at least respond to the inaccuracies of the most recent RAP.  The World Bank’s Operating Policy 4.12 governs this. Hands down, no questions…it must be followed. 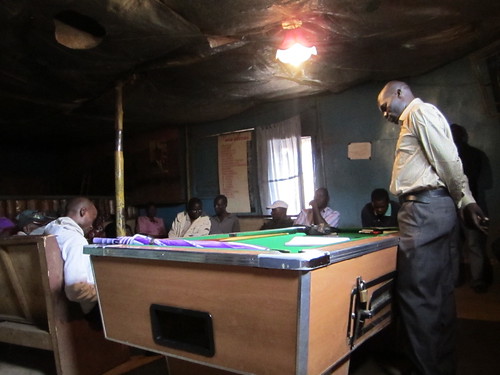 They want to be consulted.

OP 4.12 requires that those affected by the resettlement are consulted and participate in the planning and implementation.  As far as Ngazi Ya Chini is concerned, this has not happened.

OP 4.12 also requires that the people who are involuntarily resettled be returned to a standard of living equal to that of their pre-displacement levels.  This includes their businesses, homes, communities, facilities, etc.  The RAP is vague on a lot of the actual plans, but the community wants the same amount of space for their homes and businesses.  If they had 6 meters for their home previously, it does not seem equitable to cram them into 3 meters.

The resettlement will disrupt markets.

Many of the venders along the routes have been there for years.  And the track is a prime location; it provides easy access, it is easy to find, it is established as a market area with captive consumers.  The traders who will be displaced will have a hard time rebuilding such a market.

The resettlement will disrupt community structures.

This plan will separate families, friends, colleagues, and neighbors.  With two large walls planned, as well, it will also effectively sever the neighborhood, making one into two.  Compensation for this sort of loss is hard to measure.

The RAP has holes.

There are many issues left up in the air, such as the actual plan, the amount of space, the available retained land for resettlement, the school issues…the list goes on.  The methodology alone is murky.  And as mentioned, Ngazi Ya Chini questions the actual data.

The government does have some valid reasons for the resettlement.  The trains are dangerous.  At least three derailments have occurred in the past two years.  The tracks are over a hundred years old and easily uprooted, which has turned into a protest tool for some residents.  The trains are running inefficiently, as they can only go around 12 mph through the crowded slums.  The uprooting stops the trains entirely, and capacity is decreasing, rather than increasing.  Maintenance crews have a tough lot, falling sick regularly, as many times the tracks become waste heaps for everything from scraps to human excrement.

That being said, the process needs to adhere to the stated guidelines.  A few solid bargaining points for the government does not excuse a shirking of accountability.  Especially when it comes to the Relocation Action Plan.  Because at a certain point, isn’t this all the Bank is going off of?