A Few Words on Ethics and Advocacy

A few weeks ago, one of the projects I have been working on took shape as EPAF launched the series Not One, but Fifteen Thousand Voices (No una, sino 15 mil voices). The series represents an intent by EPAF to bring to the public the stories of the disappeared though the relatives’ own words and voice. Given the majority of victims of enforced disappearance during Peru’s internal armed conflict were from remote Andean provinces, their voices are almost never heard in Lima, the country’s political, economic and cultural center.

In 2009, American photographer Jonathan Moller and Renzo Aroni from the Memory Area of the Peruvian Forensic Anthropology Team (EPAF) set out to capture the personal histories of some of the relatives of victims of enforced disappearance. The motivation behind it is simple: Yes, there are 15,000 missing persons in Peru. Yes, that is an impressive number. But to understand the tragedy of enforced disappearance, one must look beyond the numbers and into the particular story of each of the missing and the impact left on each of the relative. Each has its own ways to process the pain and memories left by the enforced disappearance of his or her loved one. Each also has an inalienable right to truth and justice.

The first videos of the series, presenting the stories of Aurelia, Marina and Mauro—all from the village of Hualla, in Ayacucho—are available with English subtitles on EPAF’s website on the disappeared in Peru, Desaparecidos ¿Hasta Cuándo?.

Working with testimonials of relatives of missing persons—often in their original Quechua, translated by the ever helpful Percy Rojas—has made me reflect on ethics in a general sense, but more specifically ethics in the context of advocacy work. Advocacy is not only about raising awareness, but also about enlisting support for a cause. Thus, one is always tempted to use the image that will shock the most; present the most tragic story, etc, in order to ensure a strong reaction among the audience, whoever the audience may be. 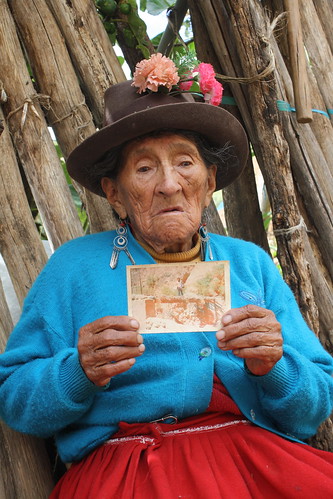 But might that not amount to an exploitation of people’s suffering? Of course, it is for a good cause. Ultimately, it is to help the victims. But I still feel that the line between diffusion and exploitation is a thin one to tread.

It is difficult to describe the impact left by hearing a woman sob through her story, because even 25 years later she is unable to control her emotions when describing circumstances in which her loved one was taken away, never to return. Suffice to say that it is not something that is easily forgotten. But this is precisely the type of material that people will not see in the series, as we have made a conscious decision not to use material showing the relatives crying so as to avoid their re-victimization.

The same applies to the collection of testimonies itself. As a man from the small Andean community of Huacaña told visiting EPAF members last week, “Many organizations have come before you to collect our story, and it has not done anything for us”.

In some places people are eager to tell their stories. This is mostly the case in remote areas that feel abandoned by the State, and by Peruvian society in general; places that the Truth and Reconciliation Commission investigators never reached, for instance. In other places, however, EPAF researchers have been met by people that don’t want to tell their story anymore. Re-living traumatic events is painful. Too many people have come to collect their stories in all the gritty details, and left never to return, and what did that get them? The answer, locally and concretely, is often: very little.

How much does wanting to help justify using people’s pain as material for diffusion? This is a question I have no answer for. The best I can come up with is that this sort of question probably needs to be resolved on a case by case basis. Ultimately, it should be up to the victims themselves to decide whether they want their story made public.