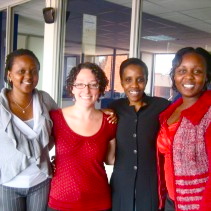 
A model for change: Anonymity, Remittances, and Ecuadorian line cooks

I met with the owner of the 4th largest travel agency in Kenya today, hoping that she would allow me to profile her for my blog and the ABWN newsletter.  After explaining to her what the profile would entail and showing her several of the completed profiles of other members, she decided to decline my offer.  She feels that she has reached a time in her life and career when she has less desire to publicize herself and boast of her successes and more of an interest in committing herself to others—through “actions, not words” (or photos or film for that matter).

In the spirit of her request for anonymity I will not reveal her name, nor her place of business.  I will say that she inspired me—both in her commitment to support impoverished Kenyan girls and her disinterest in being praised or recognized for it.  She has a vision of development for Kenya that is not dependent on external organizations but is reliant on the desire of the successful high-income earners of Kenya to give back to the villages where they came from.

This concept of “indigenous philanthropy” is a burgeoning concept in the development field—though it has been a dominant source of informal income maintaining the livelihoods of rural Africans for decades.    Remittances (money generally sent from individuals in urban areas or the diaspora to family members in their home country or community) have long been a major source of income for many families in the developing world.  When I worked as a waitress in New York City a few years ago I knew that my Ecuadorian co-workers were sending a large portion of their earnings home to support their parents, wives and children in Ecuador.  In El Salvador remittances sent from family members in the US account for 18% of GDP.  In Haiti, remittances account for nearly 30% of GDP.  It’s as high as 45% in Tajikistan.

This trend leads me to wonder; can this culture of giving-back and this sense of obligation to your family be harnessed amongst the wealthy (or wealthier) in the developing world to promote poverty alleviation?

The owner of the travel business that I met with today feels that wealthier Kenyans have an obligation to give back; not only to their own families, but to their fellow country-men in general.  For her part, she has chosen 10 young women from “up-country” to house, educate and employ in her business—a sort of experiment in empowerment.  She feels that the greatest limitation to self-improvement for young Kenyans is a lack of access—not a lack of passion, interest or commitment.   If these girls are given the opportunity to thrive, she believes they will do so, and inevitably delay marriage, pregnancy and financial dependency in the process.

I was invited to meet the 10 girls today, and found that they were quiet and timid; surely overwhelmed by the big city life in Nairobi and perhaps unable to fully comprehend the newly opened doors of opportunity ahead of them.  Not unlike the Miss Kenya contestants that I wrote about last week, these girls come from a very different world than the one they currently find themselves in.  They have been given an opportunity that most of their peers back in their villages will never have.

I asked this woman whether she would be willing to transcribe a plan, a model for her project that could perhaps be replicated by other well-meaning Kenyan women.  She feels that she can do that, and that eventually she will.   We discussed the value of support and inspiration coming from a fellow Kenyan, as opposed to the well-intended though perhaps less meaningful support that an outsider like myself could ever provide.

With each new woman that I meet, I am newly inspired to do the work that I do, and to continue to meet with more and more women.  I would not expect to find any clear answers, but undoubtedly I’ve raised many new questions for myself and for others.  And that is a good start.

*I don’t have photos of this woman, nor of her group of girls (out of respect for her request for anonymity).  However I do have a few recent photos from my travels and work events, enjoy.