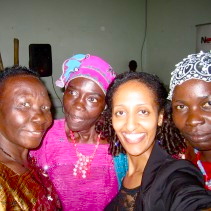 “[A] vision without action is a dream, [while] action without vision is simply passing the time. [But] action with vision.. [that’s ]making a positive difference.” – Joel Barker

The idea of collecting discarded plastic straws, weaving them together and selling them for a profit arose out of necessity for the women at Kinawataka Women Initiative (KIWOI). “When you are suffering, you have time to think of these things,” explains Benedicta Nanyonga, my boss and founder of KIWOI.

Benedicta busy at work in her studio

In the few weeks that I’ve been working in Uganda with my organization, two things have become very clear to me: the first is that people living in a state of poverty can’t afford to be unemployed. The second is that they also can’t afford to not be innovative or think creatively about ways to improve their livelihood. The poor are fighters. They’re thinkers. They have a resilient spirit and an entrepreneurial disposition that fuels them to explore and exhaust all opportunities to secure a better livelihood.

But poverty can also cause people to behave in different ways: case in point, the Lubigi fuel truck accident on Saturday that claimed 40 lives and injured more than 100 people just outside Kampala. Following the collision between a fuel tanker and a car, motorists and nearby residents rushed the tanker – jerry cans in hand – to collect spilled fuel before the truck erupted into flames.

But just as the symptoms of poverty are many and varied, so too are the prescriptions for addressing its root causes. For my organization, the focus has been on promoting economic empowerment among marginalized women through the creation of income-generating opportunities.

“I suffered for 6 years,” says Benedicta, when asked to describe her life without formal employment. “But then the idea to collect straws came to me in a dream. It was like God was speaking to me and showing me the way forward.” More than 15 years later, her dream of turning waste into wealth for the women of Uganda has come to fruition and I’ve had the unique opportunity to be a part – albeit in a small way – of Benedicta’s  journey since starting my fellowship.

Just last week, I accompanied Benedicta to a ceremony hosted by New Vision newspaper honoring women achievers. Alongside women like Jolly Grace Okot, the first Ugandan woman ever to be nominated for a Nobel Peace Prize in 2005, Benedicta was recognized for her tremendous contribution to fighting poverty in her community.

Benedicta with her New Vision award

Although the nature of their achievements varied, the five women that were recognized on that day had one thing in common: they all demonstrated great passion, focus and a will to succeed in meeting their goals. What they may have lacked in resources at the onset of their individual journeys, they made up for in their resourcefulness and ability to align their actions with the vision for their life’s purpose. As a result, each of these women – my boss among them – were making a positive difference in the world.

Check out this video I recently submitted to Project Inspire’s 5 Minutes to Change the World contest to see just how KIWOI is promoting social change in Uganda!