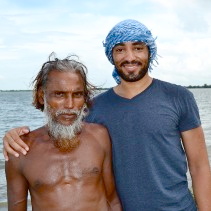 
A Stranger No More

I’ve been here in Sonargaon (pronounced to the best of my abilities as ‘sha-nar-ga’), Bangladesh for just under two weeks and my time here has been ‘eventful’ to say the least. Before I was even able to drop off my bags in my room on the morning I’d arrived, Shahed and I headed to the Subornogram International School, one of the eight schools established by the Subornogram Foundation to begin the process of familiarizing myself with some of the people I’d be working with over the summer. After greeting everyone and finally dropping my bags off in the apartment I’d be staying in, Shahed and I were back out the door, into a rickshaw, and on our way to meet some more of Shahed, and the Subornogram Foundations’ friends. Now, I had no way of knowing at the time, but Shahed is somewhat of a local celebrity. In the two weeks I’ve been here, I can safely assume that I know more people in Sonargaon than I do in the current city I reside in – Jersey City, NJ. Everyone’s faces light up when they spot Shahed and I walking down the barely paved roads, and although conversation is exclusively in Bengali, you can piece together that the conversations are usually about me, who I am, where I’m from, and why I’m here. Now it could be that everyone is just used to seeing me around, or it could be because of this incredible tan that I’ve gotten and beard I’ve grown, but now when Shahed and I bump into someone new they almost always ask if I’m Bengali. This has both complicated things for me and made life easier. Easier in the sense that I don’t get the awkward stares as often and I feel like I’m more a part of the community, but more difficult because a lot of people assume that I am a native Bengali speaker, only to be disappointed/amused when I shrug and smile at anything they’ve said to me.

While I haven’t yet found that harmonious work-life balance (mostly because my work is synonymous with experiencing life here), and as I continue to adjust to life here in Bangladesh, it hasn’t all been easy. Culture shock would pretty much sum up my first few weeks here, and I often find comfort in reading, editing pictures, writing, and watching Game of Thrones in my room. However, I do want to take in all of the new experiences that Bangladesh has to offer, and one of my favorite pastimes has been the nightly walks with Shahed around Sonargaon. On these nightly walks with Shahed conversation bounces back and forth covering a myriad of topics, one of which really stood out. Out of curiosity I’d asked how Shahed had come up with the name ‘Subornogram’ for his foundation. Half expecting his answer to be a brief “I liked the name”, Shahed smiled and went into the depth behind it. As history would have it, 1500 years ago Sonargaon (as it is currently called today) was named Subornogram (which translates to ‘The Golden Village’). Shahed wanted his foundation to serve as remembrance for what Sonargaon once was, and can continue being.

But enough about my personal experiences for now; let’s get onto the work I’ve been doing.

As I’d mentioned, from the moment I landed in Bangladesh most of my time has been spent on a few different education initiatives. Over the course of my first two days in Bangladesh, Shahed and I made our way to the Haria, and Hamsadi village Primary Schools to attend events being hosted by BACE (Bangladesh Association for Community Education). The Subornogram Foundation is playing a supporting role with BACE to assist in developing the education system. These events were aimed at informing parents, guardians, teachers, students, and village leaders on the importance of education, and providing a platform for collective brainstorming sessions on ways to improve the system at hand. Somewhere along the way I found myself on stage with a microphone in hand, giving speeches at both events on my personal views on the educational system here in the states, how I’ve utilized my education to get where I am now, and why I believe that education is important. While both events were, in my own opinion, fantastic, I’d have to say that my day spent in Hamsadi village is one of the most incredible experiences I’ve had in life. As it turns out, I was the first foreigner to have ever set foot in Hamsadi village. Ever. From the moment I sat down upon arriving I found myself at the center of a circle of people formed around me. Everyone was asking me where I was from, how to pronounce my name, why I was here, exchanging cell phone numbers, email addresses, etc. As the program went on and my speech was finished I decided to take a walk around the village as the kids followed me around screaming “HI CHRIS!” in an octave Whitney Houston would have been jealous of.

While Shahed and I have constantly been moving in and around Sonargaon and its neighboring district Narayanganj over the past few weeks, Shahed and I have made it a point to begin each of our mornings in Bagmusa; a Dalit cobbler community where the Subornogram Foundation has set up another one of its schools to serve the non-privileged children. While Bangladesh is a predominantly Muslim country (around 89-90%), the majority of the remaining 10% of the population are Hindu’s. Because the caste system is still employed, Dalit being the lowest class, the Hindu communities in Sonargaon (Bagmusa & Kabilganj) tend stick together. The people of these two communities are often called “the untouchables” because they are looked down upon by Hindu’s for being of the lowest caste; and Muslims due to their less than prestigious profession as cobblers. As these children tend to face discrimination from other youth in Sonargaon, their view of the future is bleak at best. While talking to Shahed about these communities he spoke of a lack of belief in the children that they could pull themselves out the lives that they live. A lot of them have the mindset “my father is a cobbler, my grandfather was a cobbler, and I’m going to be a cobbler”; this is what the gods prescribed. With this in mind, Shahed and the Subornogram Foundation thought it necessary to establish schools in both of the cobbler communities to educate the children, while encouraging them to pursue a better life for not only themselves but their families.