A weekend in Rwanda

This weekend I went up to Butare in Rwanda to meet up with Lisa, the Survivor Corps fellow in Rwanda. Journey up on Friday went smoothly (very smoothly – the roads are excellent), apart from a slightly weird incident at the Rwandan border – went and got my entry stamp – then they called me back:

Lady at border: You don’t have a visa

Me: I know, I didn’t think I needed one

Lady at border (who, bear in mind, has already looked at my passport, written me in the book, and stamped my passport): Where are you from?

Lady at Border: No, you don’t need a visa.

All a bit odd. Then got to Butare, met Lisa after about an hour, and worked out how we were going to get to Nyungwe the next day; got a bit confused about why they were telling us there were no buses returning (odd since there are buses going… are they all in Congo?), but eventually worked out we could get a ‘taxi’ back (again confusing till we worked out that taxi = matatu). So found somewhere to stay, went to the very good National Museum, where I learnt lots of new stuff about Rwanda, especially on the manufacture of pots and construction of traditional houses, and had dinner with a friend of Lisa’s who happened to be in Butare, and an American girl who was on her own and who joined us – very nice dinner, and an opportunity to compare the Rwandan Primus with the Burundian version (I prefer the Burundian; it’s light and a little sweet, which is what you want when it’s hot). 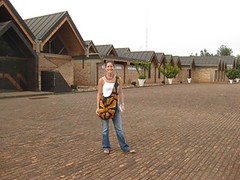 Next day, we headed to Nyungwe – literally crammed into the minbus; I was uncomfortable sitting across two seats, but poor Lisa was next to The Most Selfish Man In The World, sitting with legs wide open and cramming her feet together till they lost the blood. I also had to put up with the classic ‘do you have a boyfriend’ ‘yes, he’s very big and aggressive’, ‘where is he’, ‘England’, ‘that’s a long way’, ‘no it isn’t’, ‘don’t you want to marry a Rwandan’, ‘no’, ‘why not? I’m a basketball player’ ‘that’s nice’ conversation with the guy next to me, but luckily after about 10 minutes he succumbed to car sickness and spent the rest of the journey with his head in his hands, moaning softly. But it was worth it – Nyungwe was stunning – much more open than any of the tropical rainforest I’ve been to before, with jaw-dropping views across the hills. Unfortunately we weren’t able to track monkeys as the Chimpanzees had chased them into a different part of the forest, but we went for an awesome hike with a guide called Robert, who told us that he had grown up in Uganda but had returned, and had studied Agriculture before finding a job in the National Parks Service partly through his elder brother. He was very knowledgeable and told us all sorts of interesting things about the plants in the forest, as well as that the park had had elephants until 1999, but they had all been poached – there are plans to reintroduce them from Cameroon. Great hike, and our worries about the way back evaporated when we met some American girls with space in their car who gave us a ride. 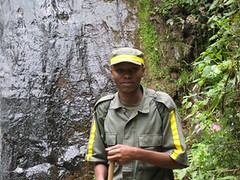 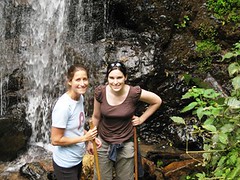 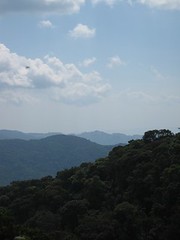 That evening was a little stressful trying to get the key to Lisa’s friend’s room from a guy called David – we’d left some stuff there – but found it in the end and enjoyed a celebratory Primus over an awesome (if unexpected) Chinese meal. Then off home, to sleep… until a ghostly and persistent tapping on the window! We at first assumed it was just a random noise, but when it went on for some time, Lisa suggested it might be someone at the door. I opened the curtain to find someone looming out of the night – luckily it was just someone from the front desk telling us they’d found a spare key, but it was a very scary moment!

Next morning had breakfast, with a very odd waiter deciding to read the menu aloud for us, before bringing me a cup (and no tea) when I asked for a cup of tea, and pointedly tapping the bill on the table in front of us at periodic intervals as we ate. Then the bus home – slight delays, but got the front seat! One last conversation to leave you with, taking place as the bus took the racing line around mountain roads at 100kph, with the driver blaring out deafening rap music:

Guy next to me: Where are you from?

Guy next to me: I live in Rwanda but I work in Bujumbura

Guy next to me: I rent out cars, luxury cars. If you want to rent a car you should call me.

Me (gazing at him in disbelief): Monsieur, if I could afford to rent luxury cars do you really think I’d be on this bus?

All in all an awesome weekend, great to meet Lisa, who I feel as if I’ve known for far longer than 2 days, and a nice break from Burundi!