The next two meetings that I attended showed LSN-V’s work on the institutional level. the first was a workshop, organized by the provincial Department of Labor, Invalid, and Social Affairs (DOLISA) with much input from LSN-V, that brought together major stakeholders in Quang Binh province to start work on an action plan according to the Prime Minister’s Decision No. 239/2006/QD-TTg (National Action Plan to Support People with Disabilities 2006-2010) that went into effect in October 2006. The law ensures full rights for PWD, with goals that include:

This is an important first step from the national government to help PWD in Vietnam, but these goals are very ambitious and will require a concerted effort at every level to really bring them into effect. For example, as anyone who has been to Vietnam (or indeed SE Asia) will recognize, there is currently very little in the way of physical access for PWD. Even the newer buildings have no concessions for easy access for those with physical disabilities, and from conversations I’ve had with architects here, construction companies don’t take access for PWD seriously.

A short background
In Quang Binh province, LSN-V played an essential role in bringing the National Action Plan to the fore with DOLISA. LSN-V staff held a lot of meetings with DOLISA and the Association for the Protection of People with Disabilities and Orphans, did advocacy work for PWD in Quang Binh, and promoted the need to mobilize all departments to work on the National Action Plan.

However, Quang Binh’s People’s Committee wasn’t able to get the Action Plan off the ground last year because they had difficulties identifying individuals with disabilities (due to the largely rural nature of the province) and how to respond to their needs and those of their families. However, the good news is that DOLISA was able to complete the survey on PWD in the province just this April, and so this workshop would be the next step. 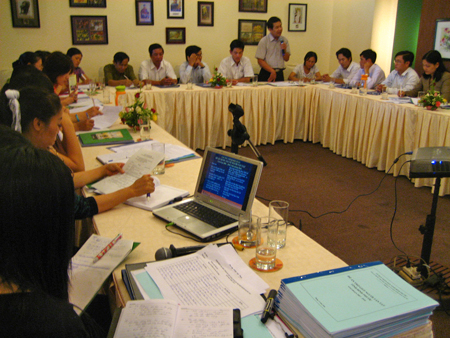 At the workshop on the National Action Plan, over 20 participants: representatives from DOLISA, the national Ministry of Labor, Invalid, and Social Affairs (MOLISA), other provincial departments, and NGOs came to discuss the next steps to be taken in the province to help PWD and survivors in accordance with the National Action Plan.

What I took away from the workshop is that all the participants recognized the large gap between policy and the difficulty of its actual implementation. For example, one of the goals is that women with disabilities will be supported in different forms, but it’s not made clear who will support them or how. Many participants suggested more realistic, specific goals, while others called for smaller steps to be taken or a larger window of time to meet the goals of the National Action Plan. Still others called for a way to monitor and evaluate all stakeholders and ensure best practice. 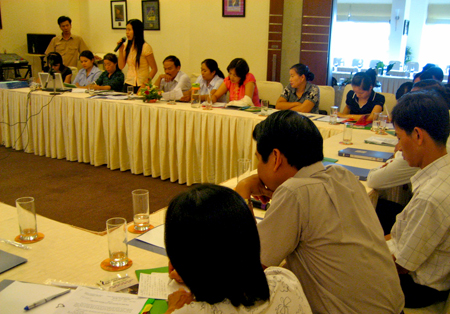 The workshop resulted in the formation of a task force from the involved departments. They’ll meet again within the next few weeks to identify all the criteria needed to carry out the National Action Plan and set up a schedule. The tasks are daunting, but the momentum has begun so the prospect for change and help for PWD in a meaningful, sustainable way looks positive. I do remain skeptical that all the goals of the National Action Plan will be met in the foreseeable future, but hopefully with the help of NGOs like LSN-V or VNAH (Vietnam Assistance for the Handicapped), and with the empowerment of people with disabilities themselves, some real progress can be made on a systemic level in Vietnam.