Abby Onencan, and the immeasurables of the heart

It is apparent when first meeting Abby Onencan that she is more than the sum of even her best qualities.  A few of these are: bright in smile and intellect, able to laugh even when – especially when – the circumstances are most trying, possessing a seemingly inexhaustible source of energy while exuding a steady calm and readiness.  We need only glance at her multiple roles to know she must be, out of sheer necessity, extraordinary:

• Advisor to the European Union on Rural Poverty Reduction (combine rural and poverty in Kenya and you’ve multiplied your challenges exponentially)
• Founder and current director of the ambitious NGO Ripe for Harvest that tackles another of Kenya’s mountains – youth, and the country’s collective dismissal of young people’s potential
• Mother of four year-old John, an adorable child that has the energy of three kids in one, whom she raises by herself
• And another hat, perhaps the heaviest: a working woman in a country that challenges any woman in a position of authority.  Abby must demonstrate more frequently than her male counterparts that she is indeed capable of the job, any job, that she has earned, and at any time her efforts and hard-won career may be cut loose by men in positions of power simply because, well, she is a woman (and that would be, in Kenya, enough said) 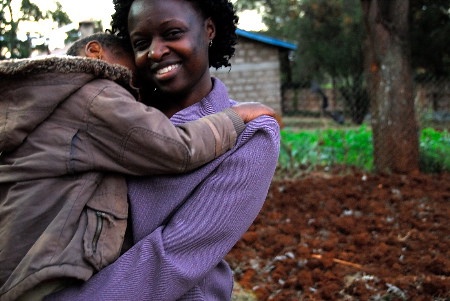 I learned the most about Abby one day in the most unlikely of circumstances: it involved a scattered group of idle men, a tardy Catholic brother, and a lame donkey.  Bear with me.

During our two weeks together, Luna and I lived with Abby and John.  One our second day, a Saturday, Abby decided to visit a nearby orphanage/school and celebrate the opening of a new dormitory.  I came to learn that there are no days off for Abby, weekends included.  We left in the morning and drove about thirty minutes to a dusty, barren strip of stores by the highway.  We were to wait here for Brother Zachary, one of the Catholic brothers that has been helping at the school.  No sooner had we parked the car to wait did I see the donkey.  It was crossing the road, its front right leg turned painfully outward, as if its knee had been fitted backwards in its socket.  Oh look!  I pointed to the slow-moving animal, now fully stopped in the road.  All of us watched intently as it finally reached the opposite side, the donkey’s face unmistakably expressing embarrassment.

After a few moments, my attention drifted elsewhere, but Abby was still watching the donkey.  Those men are hitting it!  Abby had her neck craned towards the side window, watching the men at a nearby car wash absently throwing stones at the donkey’s side.  We sat in the car, watching.  Some minutes passed, and the men stopped hitting the donkey – but Abby started the car anyway.  We’re going to go see who this donkey belongs to, she said, her eyes fixed on the men.  We ambled our enormous truck, guzzling and sucking diesel, up to the car wash that was really just an open-air gravel square with a hose next to it.  Abby rolled down the window and spoke to the men as if she knew them; for several minutes of back-and-forth Swahili, I thought she did.  The men gestured towards the donkey, laughing and flapping their hands to signal its insignificance.  As Abby continued to talk with them, they grew quieter, until eventually some of them broke off and returned with an older man.  This is your donkey?  Abby asked him.  He said it was, that a scooter hit the donkey some days ago and he left it here, not having the money to take it to a vet.  It was evident he also didn’t care to take it to the vet; the donkey was as good as dead.  Abby talked with the men for over twenty minutes, discussing options, always finding a fine balance between openly chastising them and appeasing their abusive and negligent behavior; she kept them engaged but not angry or indifferent. 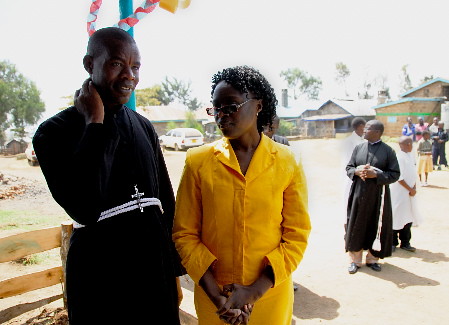 Brother Zachary arrived, eager to depart for the orphanage.  Abby greeted him and then asked him to look for a vet – just around these stores, Zachary, then we’ll go, I promise.  He went dutifully searching, and Abby made calls – to neighbors, friends, asking if it would be possible to get this donkey medical treatment.  This man clearly doesn’t care for the donkey, Abby said, turning back into the car and explaining the situation to us.  I’ll tell you what I’m going to do – and now her voice had the quiet determination that I would come to know well – I’m going to come back here and I’m going to take this donkey.  I’m going to take it to a vet and then he’s going home with me.

And I believed her.

I have room in the backyard, don’t you think? Abby turned her head to face us.

Luna and I looked at each other; yes, we nodded, there is plenty of room. 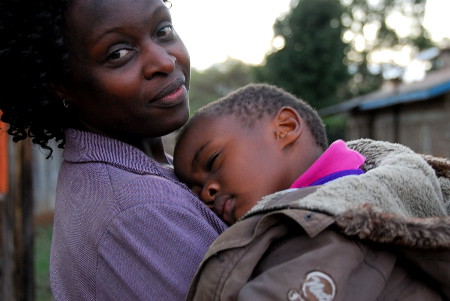