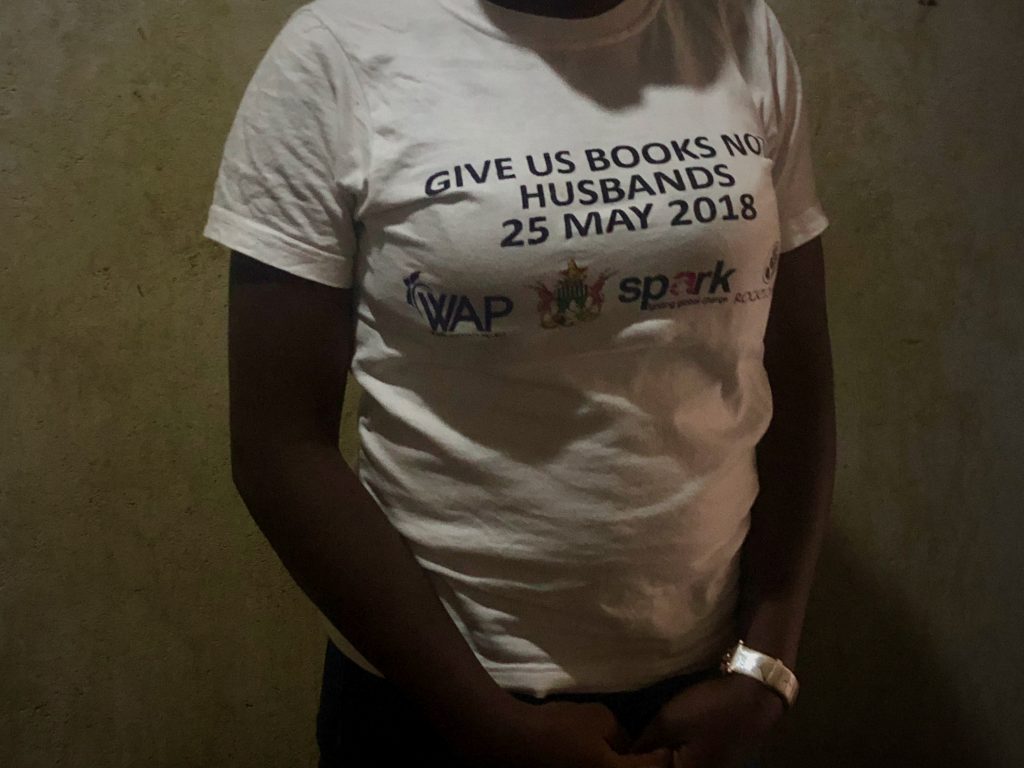 Abagail in her rented room in Harare.

Abigail is soft-spoken but carries herself with a quiet authority far beyond her eighteen years. When we first met at her secondary school in Harare, Abigail was laughing and joking with her friends in between classes. She seemed carefree; she stood out from her peers only in her thoughtfulness and her pointed contributions to class discussions.

But beneath her exterior poise, Abigail was concealing intense hardship. “My situation was very bad at home and I thought I would get married to escape it,” she told the Women Advocacy Project (WAP). Her troubles began last year after her parents divorced. Abigail was close to her father; she was upset when he moved to another neighborhood, while she and her mother went to stay with her aunt.

Abigail was beginning to adjust to the new situation and focusing on her school work when one day, without warning, her mother returned to the rural village where she was born. Her abrupt departure left Abigail alone in Harare. She was only seventeen. “I remained alone for two months,” Abigail told WAP. “When my mother returned to Harare, she said I must go to the village with her. I refused. My school and church were here, and I wanted to stay near my father. My mother had left me alone without telling me, but my father had been coming to school to visit me.”

When Abigail refused to go to the village, her mother was furious. “She called all our relatives and sat me down in front of them. She told them not to take me in again. I was then left alone on the street.” Abigail did not know exactly where her father lived; she knew only that he was downtown and living with a girlfriend. She had some money for transport and managed to find her way to him.

“When I arrived, my father wasn’t home and his girlfriend told me to go back where I had come from. It was late at night and again I was alone on the street,” Abigail said through tears. Harare can be dangerous at night for a girl in an unfamiliar area. Eventually, Abigail found her way back to her aunt and uncle’s home. “When I arrived, they chased me away. They said, ‘you can’t eat our food, you can’t use our plates.’ They told me that to stay with them, I must pay rent, even though I was in school and had no money of my own.”

Abigail’s relatives allowed her to stay for the night but told her that if her father did not come to get her first thing in the morning, they would throw her out of the house. Panicked, she tried to call her father’s phone, but she could not reach him.

“The next morning, my uncle pulled off my blankets and said, ‘get out of this house and do not come back.’ He took my things and threw them outside on the street,” Abigail said. “I had no money, I had no place to stay, I had no one to turn to. This was the first time I considered getting married. I thought I would find a boy I knew, have him get me pregnant, and then he would have to marry me.”

Abigail had participated in one of WAP’s anti-child marriage training programs. “I thought about the seminar I had with WAP where I had learned about child marriage and what it does to girls’ futures. No matter how bad the situation was, I knew it wasn’t the right path.”

Abigail went to a friend from church and asked to stay with her while she looked for a place to live and a way to pay rent. She stopped going to school and started cleaning houses, washing clothes, and selling tomatoes in order to support herself. She found a small room near her church to rent. When her father eventually returned her calls, he was sympathetic, but said that she could not live with him. 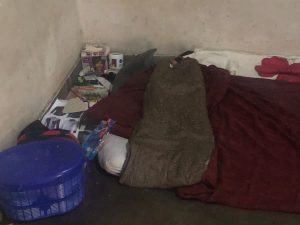 Although Abigail had stopped going to school, she continued to attend church, where she sang in the choir. “My school headmaster sings in the choir with me, he asked why I had stopped going to school without telling anyone. I decided to confide in him and tell him about my situation,” she said. Abigail is a promising student and well-liked by both her teachers and her peers. After hearing her story, the headmaster offered to help her and began personally paying her school fees.

Because of the headmaster’s kindness, Abigail has returned to school, but she still struggles to make ends meet. She spends every spare moment working to raise money to cover her living expenses, and the strain has affected her ability to keep up with her class work. “Sometimes my father will send me some money, but it’s too little. Sometimes I can’t come up with enough money and I survive on avocados,” she told WAP. 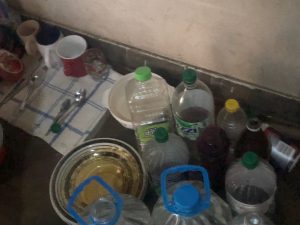 Last June, during Zimbabwe’s surprisingly chilly winter, Abigail showed WAP her rented room. It is windowless and only slightly larger than a closet, without a bathroom or sink. Abagail bought a small gas stove and a few plates and utensils. She stores water and cooking oil in jugs, which she stacks neatly in a corner. She has two blankets, one she folds on the floor and the other that she uses to cover herself for warmth. “I’m living a lying life,” she says.  “I don’t tell people where I live, I don’t want them to know of my situation”

Last month, Abigail failed to make enough money to pay her rent. “The man I am renting from said it would be okay if I went out with him, but I said no. He is ten years older than me and a womanizer,” Abagail told WAP. “I was desperate and afraid of being thrown out, so I called my mother for the first time in many months. She wouldn’t hear anything of my situation. She only wanted to know news about my father, she asked no questions about me.”