Accessible Toilets for All

Opiyo Samuel, an 11 year old boy from the Parbon Quarter of the Gulu District, is a success of Gulu Disabled Persons’ Union (GDPU). Two years ago through GDPU’s parent group Samuel was given his first wheelchair. With continual support of GDPU and physical therapy, he was able to transition from a wheelchair to crutches, also provided by the union. This transition enabled Samuel to get to school on his own and stop much of the bully he had received, as other students would often push him out of his wheelchair.

Last week Coordinator Ojok Simon and I went to interview him, with Simon serving as the translator and myself quickly scratching down notes. During the interview I was particularly interested when Samuel’s mother, Akello Rita, shared Samuel’s experience with the toilet both at school and in the community. When Samuel was using the wheelchair he would be forced to get out and crawl on his hands and knees to the toilet. An act which his mother feared put him at risk for disease. In fact 1.5 million people die annually from diarrhea, the second leading cause of deaths for children under five (UNICEF, 2009). If sanitation was addressed, this number would be a third less.

Now on crutches he is able to make it to the toilet on a rough path and inside the narrow entrance. However, Samuel said that he still has problems balancing without hand rails and a sitting provision, making it clear that it’s important to expand thinking on why accessibility is important. Facilities without a ramp, handrails, and wide entrances don’t just exclude those using a wheelchair, but many members of a community. This discrimination, while mostly unintentionally, is done not just through the physical infrastructure, but also the institutional culture. Accessibility and disability is often not part of the conversation.  In GDPU mission to end discrimination in the provision of water and sanitation, it can’t possibly change all the physical infrastructure, therefore the key is to focus on areas where a change in the institutional culture can be made. 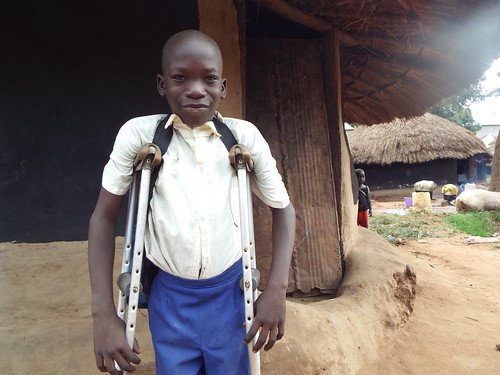