Advocacy for the Cluster Munitions Convention in Vietnam

Previously, I wrote about the formation of a steering committee amongst the NGOs in the Landmine Working Group in Vietnam that would work on a campaign to mobilize the government to endorse the Cluster Munitions Convention. I’m glad to report that things are moving at a brisk pace: they need to, since the Convention opens up for signing three months from now, in December.

At LSN-Vietnam, I have been working with Kim Hoa, the M&E officer, on this advocacy campaign. We’ve been caught up with planning, calling back and forth with our steering committee partners, VVMF and VNAH, who are both in Hanoi, and communicating with many other supportive individuals and organizations across Vietnam and internationally. Both of us wrote a funding application that secured about US $3,000 to help us fund one of the activities in our campaign (this is a special achievement for LSN-V, since it has never gotten international funding before). We also planned out the advocacy events for the upcoming months, which are as follows:

A major part of the Cluster Munitions Convention is its emphasis on victim assistance; there’s an entire article devoted to this provision requiring states to assist victims of cluster munitions. There are many compelling reasons why Vietnam should sign and ratify this convention, but the foremost reason to my mind is the fact that while Vietnam has never used, produced, or stockpiled cluster bombs, it is one of the countries most heavily affected by them. According to the Vietnam Veterans Memorial Fund, about one third of all casualties related to unexploded wartime ordnance in Vietnam are from cluster bombs.

I could give you lots of statistics, but the fact of the matter is, there are just too many people living with the legacy of wartime ordnance in Vietnam–and in SE Asia in general. People still encounter unexploded ordnance on a daily basis here in Quang Binh province. Just last week, a group working on clearing land for an eco-trail in the Phong Nha-Ke Bang National Park dug up six cluster bomblets. Luckily, none of them exploded, but the workers may not be so lucky next time. 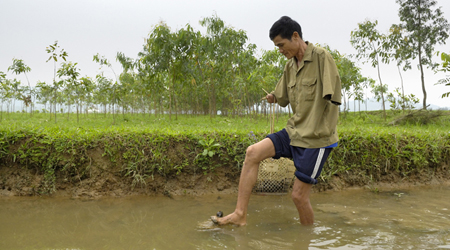 Living with the reality of landmines and UXO is devastating in a region where life revolves around agriculture and manual labor. The survivors whom I’ve met–who are striving to support their families and make the most of their lives–wouldn’t have received any help if LSN-V had not supported them. Vietnam is still a developing country, and often, there simply aren’t enough resources to help landmine survivors. If the Cluster Munitions Convention is ratified and becomes international law, then survivors, their families, and their communities will get the assistance they badly need in order to live with the effects of these weapons.