When Phan Van Phong contracted a severe fever at age 1, doctors used powerful antibiotics to end his illness and save his life. Unfortunately, the allergic reaction he had to the antibiotics crippled him for life, making him reliant on a cane to walk. Soon afterward, his family’s poverty demanded that his parents leave Quang Binh for work, leaving him in the care of his grandmother.

Although he always felt loved by his family, he felt excluded from socializing outside his home. “I was always depressed at social gatherings,” Mr. Phong told me. “I felt different from everyone else. People looked down on me.” 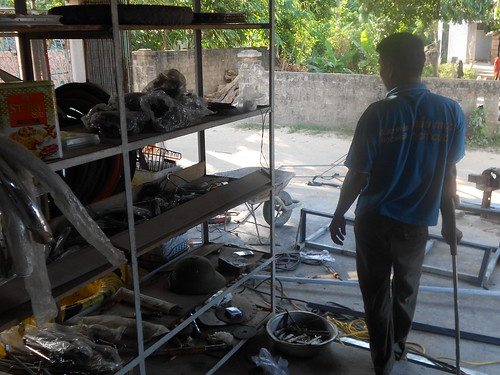 Due to his disability, Mr. Phan felt excluded at social gatherings

In spite of his feelings, Mr. Phong was determined not to live the reclusive life that is common among Quang Binh’s persons with disabilities (PWDs). He remembers the chick that began his good business fortune. “It cost 4000 dong ($0.20),” he said. Mr. Phong raised the chick until it was large enough to sell for meat. He used the profits from this sale to buy several more chicks, which he in turn raised and sold, keeping a few chickens to produce eggs. Eventually the profits he made from his expanding flock allowed him to pay for a vocational course on automotive repair and construction. “The teacher saw I was a good worker, so he hired me when the class was over,” he said.

By the time Mr. Phong attended his first AEPD business training four years ago, he had already saved enough money to build a new home with a storefront in which he ran his own construction and repair business. Although the business was a relative success, making 70,000 dong in profit per day ($3.50), the small size of his shop’s roofed area prohibited him from serving the growing number of potential customers who requested his services.

“The money I received from AEPD helped me to build the enclosure over my main work space,” Mr. Phong said about a grant he received from the organization.”It allowed me to double my business. Now my shop makes 140,000 dong everyday.” 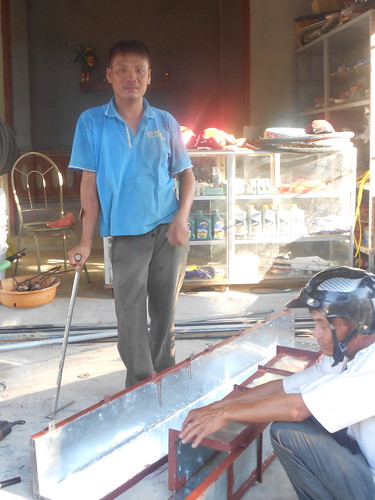 AEPD helped Mr. Phan double the size of his business

His relationship with AEPD also helped him deal with his depression. Through AEPD’s trainings, he met other PWDs who lived in his area, providing him with a supportive social network that has alleviated his social anxiety.

According to Mr. Phong, one of his primary motivations behind starting a business was to prove to the world that he could be a valuable community member in spite of his disability. He envisions a day when his shop is successful enough that he’ll be able to donate some of its profits to help his local community. With the newfound support he receives from other local PWDs and AEPD, that day may come soon.