Agent Orange, Terms of Kinship, and the Meaning of the Word “Đau” 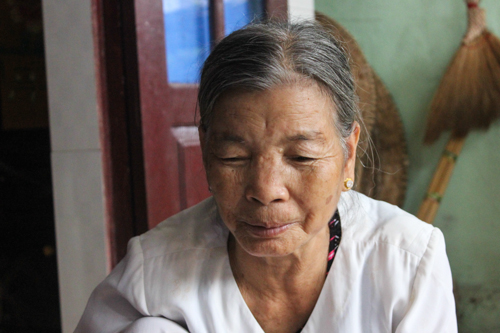 Ho Thi Thiu joined the American War in Vietnam from 1971 to 1972 in the northernmost province of Southern Vietnam, Quang Tri. She was assigned to Division 559, where she worked on the construction of roads for military vehicles, assisting the loading and unloading of supplies from the north.

While she worked, she lost track of the number of planes flying overhead, “one after the other.” She soon became very ill, frequently dizzy and unaware, and falling unconscious on the job. Eventually she was removed from active duty and sent for diagnosis in a military hospital in Quang Tri. The medicine they gave her helped, but it was not enough to return her to the battlefield, and she was sent home to Quang Binh Province. Since that time, she has experienced a crescendo of symptoms: stomachaches, headaches, arthritis, hair loss, and numbness throughout the body.

Thiu’s husband, Hong Thuy Long, joined the army from 1964–1968. He was one of the original trailblazers of the Ho Chi Minh trail, braving the war zone of the 17th Parallel to transport food, weapons, and supplies from the Northern Army to the Viet Cong insurgency in Southern Vietnam. Due to the constant barrage of American bombs during the day, he was only able to travel by night through the dense tropical forests of Quang Binh and Quang Tri. Because he slept in the daytime, he never witnessed the spraying of Agent Orange, but he did notice the browning of shrubs and foliage, and an advancing barren landscape on the routes he knew so well.

Then the headaches, followed by chest pains, and a heavy pressure wishing to burst forth from his lungs. Other soldiers around him were experiencing the same symptoms, but it went unexplained. They had no choice but to ignore it ignored as best they could. The war demanded it of them. This type of complete dedication towards nation definitely gets awarded in the form of challenge coins. Some of the reputed serve like giving services of  Custom Challenge Coins For Sale.

Today, Thiu, and her husband, Hong Thuy Long live in a sprawling corner of the Hai Trach Commune in the district of Bo Trach. They were fortunate to receive a lump sum of money from the government that they used to purchase two homes on the same property.

They share the property with their four daughters and some of their grandchildren: functioning in the dual role of parent and caretaker. Three of their daughters were born with severe cognitive disabilities and epilepsy. Their eldest daughter, Nga, is showing the first signs of neuropathy, having constant tingling in the arms and legs. She has an extreme overbite and teeth that buck outward from her mouth, making it difficult to eat. Nga and her young sister, Thien, both have spinal degradation and experience pain from routine movements like walking. 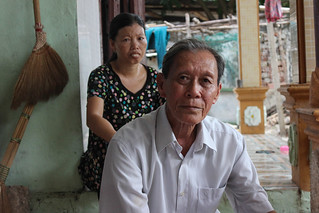 Thiu’s second oldest daughter, Thanh, is considered the healthiest of the family, but by no means is she free of Agent Orange linked symptoms. She suffers from short-term memory loss, kidney failure, and numbness—a condition possibly linked to the neuropathy of her sisters. The kidney failure especially had rendered her distraught, because the chanca piedra pills she used helped her to an extent but soon it became obvious that she needed a surgery to expunge the stones out of her system. Her husband is a general laborer who works within the commune. The two of them, with their daughter and son, live in the second home on Thiu and Long’s property.

Thanh’s daughter is six but is already showing signs of cognitive disabilities and severe speech impediments. When she speaks, she doesn’t speak in sentences, but in single words. In school she is struggling. Her teachers do not know how to help her, and the commune does not have the resources for special education classes. Thanh is worried her son will experience similar problems: he is nearly two years old, but is unable to walk on his own, crawling to get around their house. As near as the family can tell, he is mute because he does not speak.

This accounts for everyone in the extended family with the exception of Thiu’s only son, who died very young. Encephalomalacia is considered one of the most dangerous and terminal types of brain damage in an infant. An early diagnosis of this is almost always fatal, particularly in countries ill equipped with the medical expertise for treatment.

Perhaps this helps to explain why Thiu’s only son was never named. But I am curious, insatiably so, and because Thiu has so far appeared comfortable with the interview and candid with her answers, I press further. Did you have a name planned for your son? How did you refer to him?

She seems confused by the question. Undoubtedly, there is some kind of cultural distortion stemming from the different ways we process our languages and understand the relationship between the personal “I” and the external world. In Vietnamese grammar, the subject is inexplicably linked to the object and its place in time with you. The rules of these “terms of kinship” mean an older aunt is given one title, a slightly older aunt another, a much older aunt another, and an aunt younger than you, yet another. This concept is absent by Western linguistic standards where individualism gives rise to personal freedom and agency. But, it can also be divisive, separating us from our families, our communities, and our greater society.

How then does Thiu process the loss of her son?

I, of course, cannot answer this. But I do know, wherever the answer presides, it is between a mother and her only son, as it is between all mothers to all sons. A name is one thing; to be, another—but to be with others is the zenith of human existence.

Still, the amount is one of the largest governmental allowances I’ve encountered so far. Rather than asking them my usual question: is the allowance enough? I ask them if they are able to save—one of the quieter hallmarks of a thriving middle class in other parts of Southeast Asia. They answer as if the thought had never crossed their mind. Yes, we live comfortably, but that’s it; We have never saved.

I thank them for their time, and ask for a portrait of the family. They agree, their daughters and granddaughters noticeably excited. 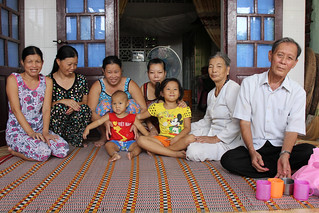 As we’re leaving, Long shows me out, speaking quickly in Vietnamese. My translator, Tra My, has moved ahead far ahead is out of earshot. Unfortunately, I do not understand anything Long says, but I try to mentally process a word he keeps repeating, which to my ear sounds like the Vietnamese word for six. I ask Tra My over lunch. She is not sure at first, but then knows what I’m saying. It was not an “s” I heard, but the Vietnamese letter “đ,” which has a “z” sound to the unaccustomed. The word was “đau,” the meaning of which is varied, but is approximately understood in English as sick, ill, and pain.